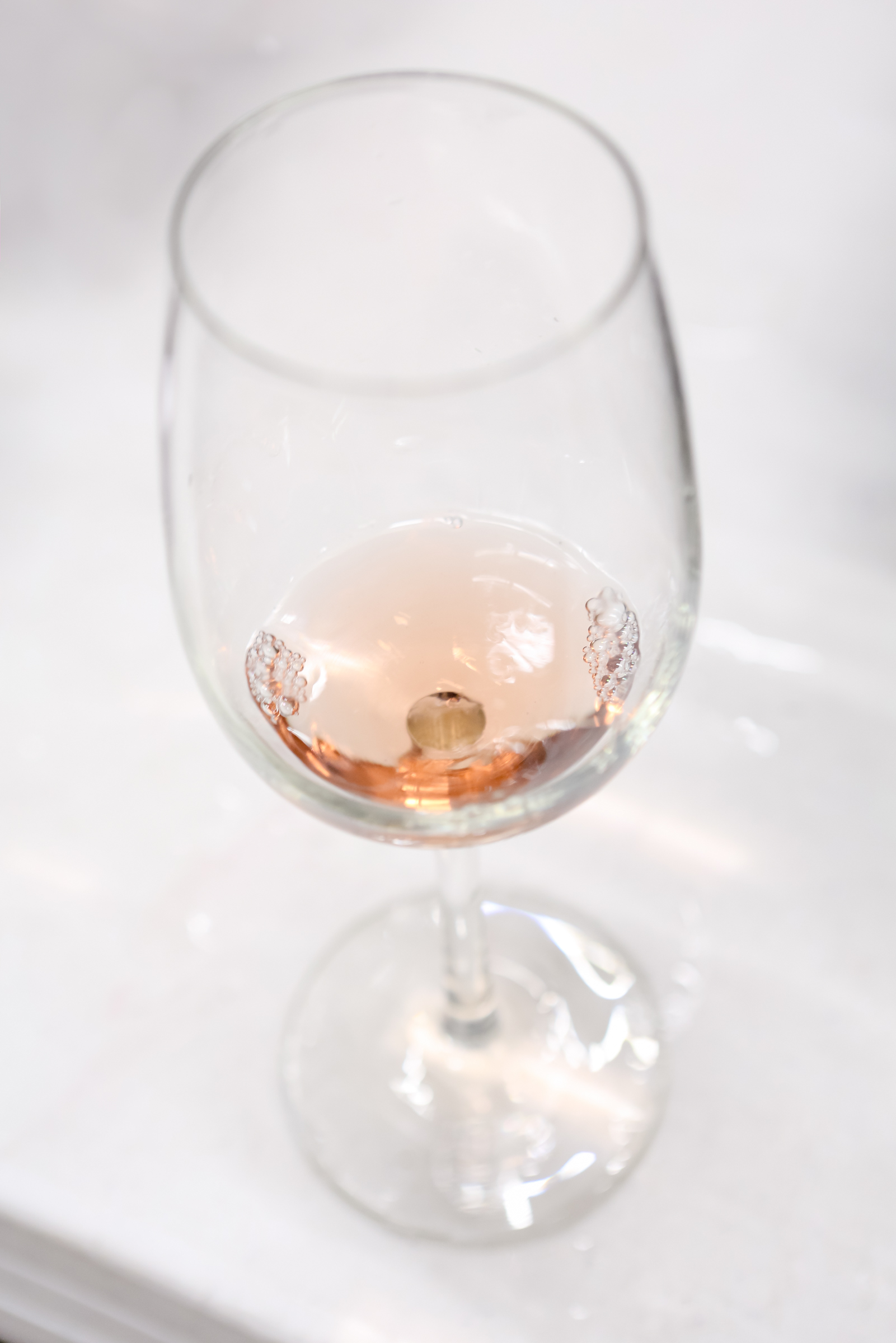 We saw it coming. Even before COVID-19 hit, and before many European imported wines were hit with a 25 percent tariff, the outlook for rosé was, well, less rosey. Clouds were forming over the sunset beach party that had been raging for the past decade.

As early as autumn of 2019, the “Yes way, rosé!” era appeared to be coming to a close. There were bottles of 2018 rosés still sitting on store and warehouse shelves. The market was flooded with cheap commodity brands. Meanwhile, Gen Z was reaching for cans of hard seltzer.

By January 2020, Nielsen analysts were predicting that off-premise rosé sales growth would slow to the single digits, putting it on par with other wine categories.

Provence, king of the category, is reeling from the fallout. Consider, for example, Château Minuty, where nearly 30 percent of estate wines are bottled in oversized formats, including 3- and 6-liter. “The inability to sit outside at restaurants… the closures of beaches, the social distancing that makes getting together at hotel pools impossible, all these limitations [are hurting] rosé sales,” says Alex Michas, chief operating officer of New York’s Vintus, Minuty’s exclusive U.S. importer.

“Our overall promotion strategy will shift,” adds Michas. “We are working to bring the essence of Saint-Tropez and the owners, the Matton family, to their consumers through different e-commerce partnership opportunities, Instagram and other social media channels in place of activations at beach clubs, patios, rooftops and waterfront settings.”

Yet rosé season is upon us, and opportunities remain. We spoke with importers, wholesalers, retailers, and producers to understand the trends that will shape the 2020 rosé season.

The pool party is over. Festive summer outdoor concerts and sporting events canceled. Producers are now pivoting to a more serious tone.

Ste Michelle Wine Estates (SMWE), for example, had been poised to roll out a new product in a can, 14 Hands “Unicorn” Columbia Valley Rosé Bubbles, in early March with a splashy “win your Unicorn trip” consumer sweepstakes winner to be announced on April 9, National Unicorn Day.

“We shifted messaging to one that celebrates small victories and moments of joy,” comments SMWE communications manager Rebekah Zale. The new campaign advises consumers to “start a gratitude practice,” and meditate or write in their journals while sipping the canned pink wine.

Others are hopeful that the shift away from “party quaffer” will foster a greater focus on quality and terroir, often absent from the rosé discussion, says Kashy Khaledi, owner of Ashes & Diamonds in Napa Valley. Khaledi created his first rosé four years ago, modeled after examples from Loire Valley’s Chinon region. “Producers such as Charles Joguet and Olga Raffault were benchmarks for the style we wanted to make, and we found a single vineyard of old-vine Cabernet Franc in Carneros,” he explains.

The single vineyard concept is relatively new for rosé, but catching on: Sonoma’s Gehricke Wines inaugural 2019 rose hails from a single cool-climate site in Los Carneros planted to Pinot Noir. The style is Provence, says owner August Sebastiani, but the profile is pure “Sonoma terroir.”

Oversupply and the Pressure to Discount

Los Angeles-based entrepreneur Tawnya Falkner produces a combined total of 28,000 cases of still and sparkling rosé under the Très Chic and Le Grand Courtâge labels, which she founded seven years ago. While she has pushed back against the pressure to discount prices in the past, she says this spring has been a completely different animal. Her still rosé, normally $16.99, is now going for as low as $13.99.

“We are seeing a price contraction across the board because of this glut of French and domestic wines,” Falkner laments. “[Retailers] are looking for at least 40 if not 50 percent gross margins… [they want] less expensive products that they can make a huge margin on.”

The oversupply is compounded by a consumer spending less: “It does seem like people are trading down with rosé this season,” confirms Stacey Gibson, partner at the Portland, Oregon retail store Park Avenue Fine Wines. She reports her average rosé bottle sale decreased by 30 percent in value.

A new buzzword among importers is “flexitanks.” Made from polyethylene, these massive, air-tight wine-transport bladders allow producers to bottle rosé on U.S. soils. According to NPR, Florida Caribbean Distillers “found this loophole” in the 25 percent tariff and now imports “truckloads” of bulk wine from France and bottles the value-priced “Le Roséy” at its bottling facility in Auburndale, Florida.

High-end producers are taking advantage of the opportunity, too. For Provence’s Château Peyrassol, bottling stateside not only enabled the estate to avoid tariffs and maintain pricing, it allowed the wines to get to market quicker. “Having our rosés available even a few weeks earlier than usual let us beat our competitors to market,” says Jeremy Sells, director of Rosenthal Wine Merchant, Peyrassol’s importer.

While some importers would prefer to stay mum on the subject of large-scale bulk importing—certain French appellations don’t allow it—others point out that it’s far more sustainable than shipping heavy glass across the ocean, and should be standard practice regardless of the tariff situation.

The anti-oxidative format of the refrigerated flexitank enables wine to stay fresher longer, believes Paul Chevalier, global director of marketing for Château D’Esclans and a vice president at Shaw-Ross International Importers, who is now bottling The Palm by Whispering Angel on U.S. shores for the first time. “With young, fresh-style wines like our Provençal rosés, [bulk shipping] adds another three to six months of shelf life to the product, in my opinion,” he says.

Large-format rosés are looking different this season. The once-popular rosé magnum, jeroboam, and methuselah, which were previously the domain of high-end on-premise venues, don’t translate to retail, particularly in the era of social distancing.

Bag-in-box rosés are a better fit for the home, and the current somber, belt-tightening zeitgeist. And the format no longer signals lower quality. Boutique importers—such as Jenny & François, with its “From the Tank” Vin de Pays du Pont du Gard rosé—are finding that the time is right for quaffable bag-in-box rosés from France.

“Our bag-in-box sales are three times what they usually are,” reports Melissa Saunders, owner and CEO of the New York importer Communal Brands, whose bag-in-box rosé is called Hérisson by Domaine Rochebin. “This thrills me because it’s something I have believed in for a while now: Putting better-quality wine in a more environmentally-friendly format.”

At 3 liters, boxed wines conveniently avoid the new import tariff, as well. “Naturally, if you do the math, the larger formats will definitely be selling at a better rate, and that makes a difference,” comments Lorena Ascencios, wine buyer at Astor Wines in New York. In May, Astor was sold out online of the “VRAC” IGP Mediterranée bag-in-box rosé.

Village Wine Imports, an importer and wholesaler based in the Bronx, is having an unusually strong year with the VRAC, says founder Michael Petrillo. The line gets its name from the French term for purchasing wine by the jug direct from wineries. To keep up with increasing demand this spring, Village Wine Imports has rolled out a 3L pouch in addition to its bag-in-box, and is adding a 250ml single-serve pouch in June.

Domestic wineries are also experiencing increased demand for higher-end bag-in-box rosé. Michael Cook, sales director at Lieb Cellars and Bridge Lane on the North Fork of Long Island is seeing a jump in demand for his 3L Bridge Lane box. “With folks making fewer stops at the wine shop, or now ordering deliveries, the value proposition is starting to shine,” Cook observes.

Meanwhile, refillable growler sales, in states—such as Washington, Texas, and Oregon—where this is legal, are seeing a spike in demand, as well.

Portland, Oregon’s SE Wine Collective is filling growlers with a 2018 rosé for contact-free curbside pickup. In nearby North Plains, Abbey Creek Vineyard winemaker and proprietor Bertony Faustin reports that “75 percent of what we are selling now is in refillable bottles,” and credits curbside refills of his “#Oooowee” rosé growlers for $25 with keeping his business afloat.

Most rosé has always been crafted for fresh, immediate consumption. Of course, there has always been a very small European contingent of high-end rosés meant to age for years, if not decades, including Provence’s Clos Cibonne, López de Heredia from Rioja, Valentini from Abruzzo, and more. Chateau D’Esclans joined the fray more recently with its ultraluxe “Garrus” and “Les Clans” bottlings. But now, barrel-finished rosé meant for bottling aging has entered the mainstream.

In Walla Walla, Washington, winemaker Fiona Mak makes seasonally inspired bottlings for her Smak label, which is devoted entirely to rosé. “Our tagline is ‘Rosé All Year,’” Mak says, adding that she changes her tasting room décor depending on the season. This winter, she will be offering a barrel-fermented and barrel-aged Syrah-based rosé ($18). “It’s a fireplace, cozy, cabin-style wine, that really goes well with Thanksgiving meals,” says Mak.