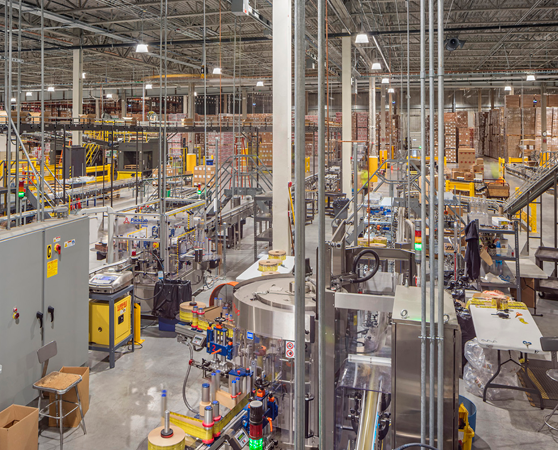 It’s only in hindsight, now that the company is fully operational in a shiny new bottling and production facility in Boston, that the M.S. Walker team can fully appreciate just how many challenges they faced operating out of their former space.

“We’ve always prided ourselves on producing great product and getting it to our customers accurately and on time,” says Gary Shaw, VP Sales. “Our fill rate has long been the best in class. And we did so while operating out of three separate locations—in a bottling facility that was inefficient and low-tech.” 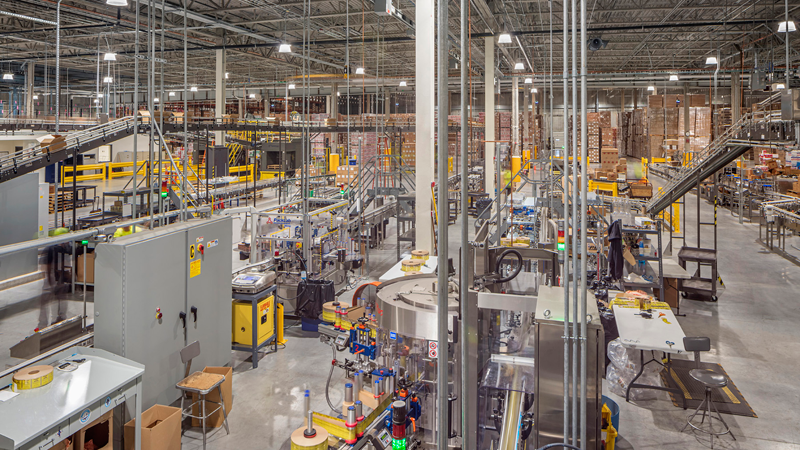 It’s a contrast in extremes: Moving from an outdated, 34-year-old facility into what is arguably the finest, most cutting-edge bottling and production plant in the industry, M.S. Walker is capable of significantly greater speed and volumes, and more creativity as well.

“We designed this space to be as agile as possible, knowing that our sales and marketing teams will be bringing so much new innovation to the table,” says Michael Saitow, CIO, who led the build-out. In the years leading up to the move, M.S. Walker had focused on expanding the distribution side of their business and stopped investing in equipment, so there is a lot of pent-up creativity waiting to be unleashed. “Now we are ‘releasing the hounds’ in our marketing department, and the world will soon be seeing some really interesting new products from us in the near future,” says Scott Allen, General Manager.

There were many criteria which drove the selection of the new facility’s coordinates. First, the symbolic significance of returning to M.S. Walker’s Boston roots: “We’re only 10 miles from our old warehouse in Somerville, but it was really important for our company after 35 years of being outside of town to return to our historical Boston home where our family started this business in 1929,” says Shaw.

Proximity to core distribution routes was critical, as was finding a space that could accommodate rail cars, since the bulk of M.S. Walker’s raw materials arrive via rail. Public transportation was another major factor, shares Shaw: “Our employees are our greatest asset and we want them to have easy commutes.”

Yet perhaps most essential: Water. “Most spirits are made up of 60% water, so it really is our most important ingredient and we are lucky to have one of the best water sources anywhere,” says Shaw. The Massachusetts Water Resource Association is widely regarded as one of the finest water systems in the country, consistently top-rated for its purity. “Maintaining our top-quality water source was critical for us, and will enable a consistency in taste and quality across our portfolio,” says Shaw.

Before construction in the new space began in 2016, Saitow and his team spent years canvassing warehouses across multiple industries, including Heaven Hill Brands, Harpoon, Beech-Nut and Garelick Farms. “Our four priorities were safety, quality, customer and cost,” he explains. “We had been running at 50% efficiency and we wanted to figure out exactly why. We looked at everything in our planning and production process, studying the kinds of things that drove efficiency down.”

The Need for Speed

In 2015, M.S. Walker produced one million cases—and it required 30% overtime to do so. Now, the bottler can hit 2.5 million cases with zero overtime. At peak performance, the Somerville facility could yield 4,000 cases per day (with overtime). That number is 7,000 in the Boston location (no overtime). “We can produce better, faster, cheaper and more efficiently,” says Shaw. “Because of technology, we’re so much more flexible.”

There are tasks in bottling facilities that suck time; changing from one mold to another for example, or moving from one distillate to the next. “Our goal was to be able to switch from bottling one product to bottling the next in less than 15 minutes—we want to be like NASCAR,” says Saitow.

Automation is helping them get there. The old space was full of portable pumps and hoses that one employee would hook and unhook to tanks, then manually check a box on a piece of paper. “An employee could only do one thing at one time—there was no ability to multi-task,” says Saitow. “Now we have five miles of stainless steel piping and semi-automatic control valves so everything can run parallel at the same time. With our six batching stations, one person can be making six products at one time, which is enormous for agility and scale.”

Shaw is quick to mention, however, that in spite of all the automation, M.S. Walker will not be reducing head count: “Our goal is to retain all our employees, and just enable them to use their time more efficiently.”

Amazingly, all this efficiency comes without a big size upgrade. The old facility was roughly the same size as the new one, but “it didn’t have good space planning or flow—there was no feng shui,” Saitow describes. Poor staging meant that the company maxed out at 120,000 cases in the warehouse, whereas now they can get to 600,000 should future growth require it. The added liquid and case storage capacity has enabled them to forecast raw materials needs in larger amounts, ensuring consistent supply of product.

Interestingly, Saitow reduced the overall number of tanks by 40%. “With fewer, larger tanks we were able to increase our capacity by 300% by optimizing space,” he explains.

Justin Shaw, Director of Brand & Market Strategy, won’t disclose what may be coming down the pipeline, but says to expect creativity in a variety of forms—closure upgrades, reconfigured bottle shapes, new labels, embossed lettering. “Having flexibility allows us to do just about any type of modern package, so we can now pursue product development that we couldn’t before,” he says. “Restrictions on height, size, labels are gone, so we have much greater room to pursue a more premium path.”

M.S. Walker has long operated with extreme success in the commodity space, but the craft segment is where they plan to compete in the future. “The consumer has a very definitive idea of quality based on packaging, and now we can ensure that our products’ exteriors match the quality of what’s inside the bottle,” says Shaw.

An ultra-sophisticated new laboratory will give the product development more opportunities to experiment, from product coloration and shelf stability to flavor. “While our primary focus is internal new product launches, we are in a very strategic position to offer contract services to outside clients which is part of our plan for the future,” Allen explains. “Within our network we also have distribution, so we could be a one-stop shop for companies looking to operate on the East Coast.”

M.S. Walker’s corporate office also moved to a new location, just five miles away from the new production and warehouse facility. Allen observes, “the aggregate of these moves and the investment we’ve made has created new synergies within our team and a tremendous amount of positive energy.”

The new facility has served as a catalyst to reevaluate every aspect of their business including their distribution operation, as the company moves to streamlining their invoicing processes and general work flow. “We have a new mindset,” says Saitow. “We are better than we were six months ago, but not as good as we will be six months from now.”

It’s a new era for M.S. Walker, believes Shaw—one made possible by a strong foundation going back generations: “People inside and outside of this company have been incredibly thrilled and shocked by the way we have really invested in our business. It shows the world that we are taking this company to a different level, and as a member of the fifth generation of this family business, that fills me with a lot of pride.”