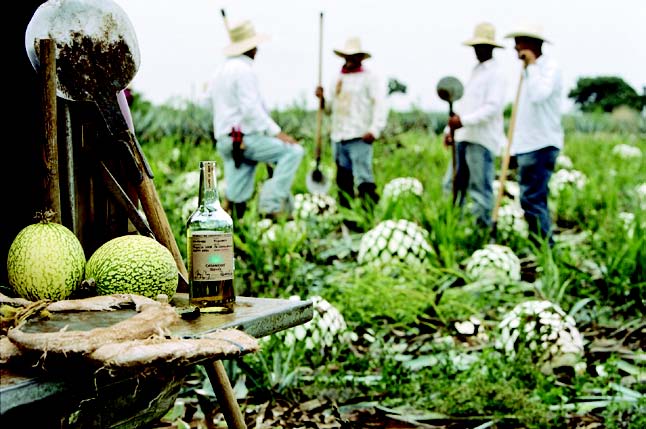 Tequila Connoisseurship Emerges, transforming it into a sipping spirit 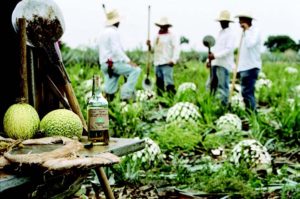 Agave fields, like this one supplying Casamigos, provide the distinctive raw material, which is then cooked, fermented and distilled. Alex Gabriel Mendoza competes in the 2017 Road to the Hacienda Challenge, sponsored by Tequila Herradura; participants were tasked with creating a twist on a classic cocktail.

Agave-based spirits have found themselves in a bit of a best-of-both-worlds sweet spot previously reserved for the likes of whiskey and Cognac. Not only are they among bartenders’ favorite cocktail bases of late, but the Mexican distilled beverages—especially tequila—are enjoying increasing prominence as sipping spirits.

“There’s definitely a trend toward consumers enjoying tequila neat or on the rocks, driven by pure curiosity and the knowledge they’ve gained, especially with our aged expressions,” says Christine Moll, Category Marketing Director, Tequila for Campari USA, which markets Espolón Blanco and Reposado, among other limited releases.

It’s been a movement that gradually has been building since the early 2000s, when marketers wagered that the same premiumization phenomenon that had been driving vodka sales had a place in the tequila category as well.

Last year, total U.S. tequila volume was up just over 7% to 15.9 million cases, according to the Distilled Spirits
Council, with the high-end and super premium price tiers growing 16% and 7.3%, respectively. 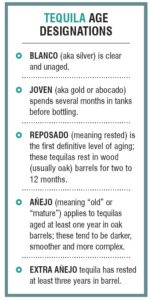 Patrón usually is credited as the most high-profile pioneer in the super premium space and both boutique and mass-market brands have a presence in the above premium tiers. But it’s not all about putting a fancy label on an even-fancier bottle. There’s genuine connoisseurship happening as consumers have become far better versed on everything from flavor nuances to production processes to maturation grades.

“The true tequila connoisseur, a growing group, is as informed as their counterparts in whiskey or wine these days,” observes Ken Austin, founder of Tequila Avión. Austin notes that much of the “sipping” consumption is happening on the rocks, something that Lee Applbaum, Chief Marketing Officer at Patrón Spirits International, has witnessed as well. “Consumers in the tequila category have matured in their understanding, not just of the nomenclature around it—what makes a reposado and an añejo and what’s a tahona, for the more advanced,” Applbaum says, “And even one step further from that, consumer skepticism around claims of ‘authenticity,’ ‘hand-crafted,’ ‘artisanal,’ has trickled down to tequila— which is a good thing.”

It’s apropos that Applbaum mentioned the tahona, the colossal two-ton stone wheel that only the most traditional of traditional producers use to crush agave and release its juices. A few years back his company launched the Roca Patrón line of tequila whose agave was milled through the tahona process (‘Roca’ refers to the volcanic
rock from which the tahona is carved).

Patrón also plays in the luxury space with its Gran Patrón line, whose retail prices tend to be well into the triple digits. The jewel in that crown is Gran Patrón Burdeos which is aged in American and French oak barrels and finished in vintage Bordeaux barrels. You won’t be finding that one in a strawberry margarita.

Similarly, Tequila Avión markets Reserva 44, a limited, small-batch extra añejo that’s aged for nearly four years in oak—43 months and then an additional month in petite barrels, to be exact. Austin recommends that consumers enjoy it neat or with a single ice sphere. He says the trade has dubbed Reserva 44 the “Pappy Winkle of the tequila category.”

That power of celebrity certainly isn’t lost on the Casamigos brand, as partners in the business are high-profile entertainment and nightlife industry entrepreneur Rande Gerber and George Clooney. They play up the artisanal production process, particularly the 72 hours that the agave piñas spend baking in traditional stone ovens, the 80-hour fermentation process and the use of a proprietary house yeast. Its marketing positions it as a sipping tequila,
especially its reposado and añejo varieties, and yet it is also becoming a mixologists’ favorite.

Sipping Spectrum
Of course, there’s a continuum to connoisseurship. But most curious tequila consumers looking to trade up have, at the very least, been seeking out 100 percent agave products. Some brands are positioned to enable that trade-up from right within their own portfolios. Sauza is a good example. The Beam Suntory brand has the more mass-marketfriendly Sauza Silver and Sauza Gold, but then offers its Sauza Signature Blue line of 100 percent agave
options. And their sibling brand Hornitos Black Barrel beckons with more complexity yet, gained from a special aging regimen that uses traditional, charred and toasted barrels. 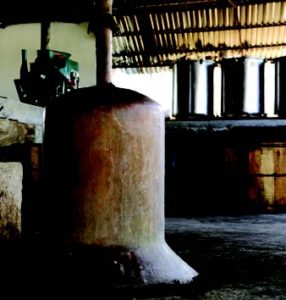 Like tequila, mezcal production—seen here at Mezcales de Leyenda—involves cooking agave piñas before fermenting and distilling. Critical differences: for mezcal, agave is sourced from anywhere, not just Jalisco; and many types of agave are permitted.

Don Julio has three sipping tequilas, each with a point of distinction. Don Julio 1942 is an añejo created for the 60th anniversary; Don Julio 70 Clear Añejo (created for the 70th anniversary) is given a charcoal filtration that restores the crisp agave notes found in the Blanco while also stripping its color. And Don Julio REAL, their extra añejo, is produced only from the best estate-grown agave and is pot-distilled, yielding only three
barrels per cycle.

Casa Noble, bought in 2014 by Constellation, features a solid ultra premium lineup of Crystal, Reposado and Añejo tequilas. Named “Tequila Producer of the Year” at the 2016 International Spirits Challenge, Casa Noble is one of the few certified organic and kosher tequilas on the market today. But as with other well-distributed brands, it is important to have a crown jewel atop the portfolio. In Casa Noble’s case, the brand has a rare, limited release luxury line called Colección del Fundador. The first edition, Alta Belleza, launched in 2016. It is a single-barrel Extra Añejo finished in ex-barrels of Robert Mondavi To Kalon Cabernet Sauvignon; only 563 bottles were available to the world.

Cuervo has excelled in special editions. Jose Cuervo Reserva de la Familia has been released every year since 1995.  Self-dubbed “the world’s first extra-añejo tequila,” it is aged in both French and American oak, and each annual release is enhanced by an special artist-decorated box. Cuervo has also done limited editions honoring the Rolling Stones, who in 1972 famously brought Jose Cuervo along for their North American “Tequila Sunrise”
concert tour.

Room To Grow
Many automatically associate “sipping” with “aged,” but, as Patrón’s Applbaum points out, there’s been a definite trend toward drinking blanco/silver tequilas on their own: “Enjoying blanco tequila on the rocks, you really taste the agave and the citrus notes coming out from it.”

That’s not to say tequila sipping is exactly where it is with whiskey, but that means there’s plenty of untapped potential. “There is still a lot of room for increased knowledge when it comes to people who consume tequila only in a margarita— the number-one cocktail in the U.S,” says Avion’s Austin. “This bodes well for the tequila category, especially in the ultra premium segment.”

While mezcal—tequila’s smoky, mostly Oaxacan cousin—is also an ancient craft, its toehold in the U.S. is young indeed. The granddaddy of our mezcal market is arguably Del Maguey, a brand founded way back in 1995. Visionary Ron Cooper put single village mezcal on the map, unapologetically importing multiple SKUs, demonstrating how ancient processes combine with varying micro-climates and terroir to give each creation its own unique, rich character. Striking green Del Maguey bottles were the first mezcals to reach the back bar of many U.S. establishments.

In the 21st century, mezcal’s natural connection with tequila has made trial much easier for agave aficionados. And the market now has a range of options, many with evocative names (Scorpion, Ilegal, Sombra, Montelobos, El Buho). It’s notable that the hip SXSW Festival in Austin has an official mezcal this year (Kimo Sabe); and the category has its own celebrity brand in Cheech Marin’s Tres Papalote.

Perhaps the most mainstream sign of all: Ilegal, after taking on investment by Bacardi, recently entered a national distribution agreement with Southern Glazer’s. And new entrants continue to illustrate the natural variety of mezcals; Mezcales de Leyenda currently offers five different organic mezcals, from five different regions using five different agave plants. Megan Barnes, Beverage Director of the mezcal-centric Washington, DC watering hole Espita Mezcaleria, has encountered a broad spectrum of consumers, and she’s got quite an arsenal at her disposal, with some 135 different mezcal bottles.

“The level of knowledge ranges in our guests,” Barnes observes. “Our regulars tend to take notes, keep journals and even photograph the bottles they enjoy. I’d say more newcomers are likely to ask for a ‘smoky mezcal.’ Offering flights is a lot of fun because it allows us to tell a story.” One of those flights is designed to demonstrate how terroir influences the agave from region to region, just as it does with wine grapes. It includes three mezcals made from the Espadín variety—there are some 30 agave varieties that can be used in mezcal, versus only one, Weber Blue, for tequila—all made in a similar manner but with vastly different flavor profiles.

A brand new destination for mezcal enthusiasts in Williamsburg, Brooklyn, is La Milagrosa (The Miraculous). From the outside, it looks like (and is) a Mexican deli. But behind the dried chiles, prickly pears, chorizo, sauces and the like—staples used in owner Felipe Mendez’s Cerveceria Havemeyer restaurant next door as well as at his well-known La Superior—is a freezer door that leads to a reservations only “agave bar and listening room.” With curved wood walls and ceiling optimizing the acoustics, Mendez is able to unleash his dual passions—15,000 vinyl records and dozens of tequilas and mezcals.