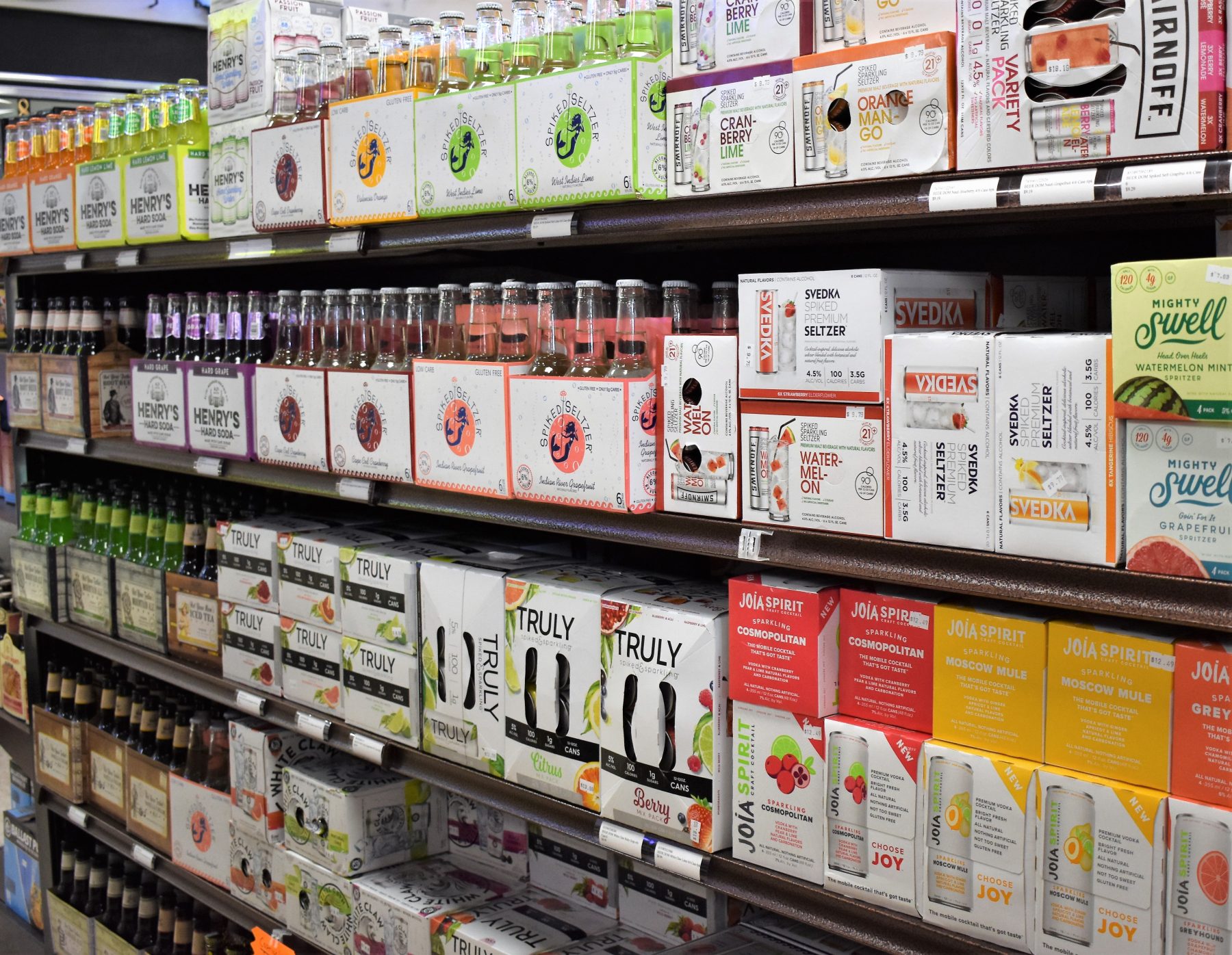 As brands proliferate, beer and wine companies push the category in new directions to gain a competitive edge

This winter’s National Football League playoff season featured a different kind of Budweiser commercial: Randy Diaz, the fast-talking fictitious mayor of Seltzer, Pennsylvania, professing affection for Bud Light, as well as another beverage inside a slim, lanky can.

Within weeks of its launch, the Bud Light–branded seltzer became the third largest brand in the exploding hard seltzer category. “The seltzer craze is on,” says Andy Goeler, vice president of marketing for Bud Light. Instead of simply surfing the wave, he said, “we’re bringing our biggest brand into the category to really help it grow.”

Brewers large and small are beginning to see seltzer’s potential to “bring people back into beer from spirits and wine,” says Bud Light’s Goeler. Because the federal Alcohol and Tobacco Tax and Trade Bureau (TTB) classifies malt- and sugar-based hard seltzers as beer, they are taxed and distributed like beer (rules vary by state). Facing declining sales for its workhorse, Bud Light, Anheuser-Busch InBev (ABI) has leaned hard into seltzer, with Bon & Viv Spiked Seltzer, Natural Light Seltzer, and now Bud Light Seltzer, which was in development for 18 months. Goeler hopes it has a halo effect on the entire company, reengaging Bud Light drinkers. He does not see hard seltzer as a soon-to-fade beverage trend such as alcoholic sodas or root beer: “It’s a reestablishment of the industry.”

Hard seltzer is still in a rush-to-market phase, and though Bud Light Seltzer may be the most significant new player, it’s but one of dozens of new brands: Nielsen predicts the players to double in 2020 alone. It’s a branding arms race, as beverage companies try to break away from the pack with new flavors, fresh fruit infusions, sports partnerships, and alternative sources of alcohol.

But even rapidly growing categories can become too crowded, and many of these beverages will fail. As the category matures and consumers become more demanding, which direction will the category take? How does a brand gain a competitive edge when the objective is flavored, bubbly water that cloaks the taste of alcohol?

Gallo’s Barefoot Hard Seltzer is new this year, and based on wine.

Hard seltzer, a carbonated beverage typically made by fermenting sugar, burst onto the scene in 2013 with Spiked Seltzer (which became Bon & Viv), and seemingly overnight morphed into a pop-culture phenomenon, powered by the twin engines of White Claw, from Mark Anthony Brands, and Truly, from the Boston Beer Company. According to Nielsen, 2019 sales of hard seltzer in off-premise channels rose more than 300 percent, topping $1.5 billion in sales. Financial advisory firm Evercore ISI recently predicts hard seltzer will grow 144 percent this year, and reach 11 percent of the beer industry’s total volume by 2022.

The hard seltzer segment is now swarming with clones honing in on a formula: sugar fermentations filtered to taste neutrality, infused with “natural flavors,” such as black cherry, and packaged at 5 percent ABV and 100 calories (or even less). The category has successfully capitalized on larger trends of health and wellness, enticing consumers with its low-cal, low-alcohol proposition.

Seltzer is an equal opportunity category disruptor, stealing share most notably from beer, but from cider, spirits, and wine as well. In 2019, Drizly saw hard seltzer sales grow to nearly 10 percent of its combined beer, cider, and seltzer category, while lager shrunk more than 3 percent. Publicists for White Claw (which declined interview requests) claim that hard seltzers are sourcing a whopping 48 percent of drinking occasions from beer, compared to 28 percent from spirits and 24 percent from wine.

White Claw continues to lead the category, and recently introduced its first new flavors in over a year.

Hard seltzer is typically mild in flavor and acidity, but companies are discovering that a delicious flavor profile will be increasingly important as the category matures. “We’ve learned from our drinkers that they do want more flavor and to be hit with aroma when they open a can,” says Casey O’Neill, the Boston Beer Company’s product development manager and inventor of Truly, which comes in 13 flavors, from watermelon-kiwi to pineapple.

In response, the company revamped Truly’s formula last year to create a cleaner, crisper profile and elevate the flavor Truly’s latest trial—what O’Neill calls “flavor differentiation”—was released earlier this year: four Truly Lemonade Hard Seltzers. “It was natural to bring out something that’s a little bigger in flavor,” he says.

Just this March, White Claw made a similar expansion move, adding tangerine, watermelon, and lemon to the original five and Pure (un-flavored, launched in 2019).

The new trio plus mango will now populate an all-new 12-can Variety Pack. That is important to case-stacking retailers as White Claw’s “Flavor Collection No. 1” (with black cherry, ruby grapefruit, lime, and raspberry) is currently the best-selling variety pack in the category, according to IRI data.

Amy Walberg, the founder of Press Premium Alcohol Seltzer, believes bold, fruit-forward flavors are the key to success. “Lower calories matter, but taste also matters,” Walberg says. “That’s how we’ve been able to grow.” She launched her Milwaukee, Wisconsin–based company in 2015 with a rotation of culinary flavor combinations, including grapefruit cardamom, blood orange chili, and lime lemongrass, layered on a gluten-removed malt base that sits at 4 percent ABV. The company’s offbeat flavors and lower alcohol stoked sales of around 482,000 cases in 2019; the brand is aiming to hit 1 million in 2020. (A recent minority investment from Constellation Brands will help, too.)

Truly Hard Seltzer refreshed both the brand packaging and formulas in 2019.

While hard seltzer is widely perceived and promoted as a low-calorie, seemingly “healthier” alcohol option, the average consumer has no idea what’s actually inside the slim cans. Now, other beverage categories are entering the hard seltzer sweepstakes, promoting alternative alcohol bases and natural fruits to entice ingredient-conscious consumers.

In some cases, the alcohol base is being tweaked. Schlafly Beer, a craft brewer in St. Louis, offers the Boomerang line of 90-calorie mead spritzers. E. & J. Gallo Winery’s play is twofold: the vodka-fueled High Noon Sun Sips and the wine-based Barefoot Hard Seltzer. High Noon gets its extra juice, so to speak, from real fruit juice and no added sugar. Barefoot’s new entrant, just launched in February, is based on wine but labeled as a seltzer, not spritzer. Anna Bell, vice president of U.S. marketing for Barefoot, believes the 70-calorie seltzer in 8.4-ounce cans, will meet underserved “taste preferences,” appealing to longtime Barefoot fans and customers fresh to the brand.

For Chicago-based Phusion Project, the magic ingredient is… more alcohol? The 12 percent ABV Four Loko Hard Seltzer is sold as the “hardest seltzer in the universe.” It’s tempting to call that hard seltzer’s jump-the-shark moment, but then Evil Twin, the try-anything craft brewery in Ridgewood, Queens, rolled out Evil Water, a hazy “pastry seltzer” made with marshmallows.

The Power of Branding and Distribution

As the category accelerates, we are sure to see more innovation (and gimmicks) as well as increased investment. There’s been a recent uptick of sports sponsorships from large brands (Truly is the official hard seltzer of the National Hockey League) and small (Braxton Brewing’s Vive is the official hard seltzer of the NFL’s Cincinnati Bengals). This June, Mark Anthony Brands plans to open a $250 million production facility in Arizona to prevent another shortage that plagued the company in 2019. Last year, San Juan Seltzer opened America’s first hard seltzer taproom, Seattle’s San Juan Seltzery. Guests can sip Old-Fashioneds with ice hewn from Fuji apple hard seltzer, then order Dungeness crab cakes paired with huckleberry hard seltzer.

The fizzy euphoria surrounding hard seltzer is still bubbling. But now comes the hard work of building sustainable brands that meet real consumer needs and stand out from the pack. May the best bubbles win.