Without a doubt it was worth the wait.

Back in 1976, I had my first great beer experience. In those days nobody was a beer connoisseur because there weren’t many to choose from. When a new acquaintance asked if I wanted a beer, I accepted the offer because I was thirsty, not because I was seeking to expand my knowledge or looking for a new sensation.

To this day I remember the aroma that came from that bottle. I looked up at my host and whispered, “It’s a forest!”

It was a Ballantine IPA. I knew of Ballantine, having grown up as a New York Yankees fan; it was a beer for old men. Never had I heard of India pale ale. But this… this marvelous liquid… oh my. Life would never be the same, and it hasn’t.

Now it’s back. It was something of a spiritual experience for me to reach out and embrace this long lost friend. Sort of like the biblical tale of the prodigal son. Well, not quite. I was holding the bottle by the neck. I took it home and chilled it, tasted it, smiled in satisfaction. Well done.

It is not the same beer from 1976. (Several sources say that the previous recipe is “long lost,” which I doubt, because the beer was available until 1996.) The new Ballantine IPA is well balanced, apparently dry hopped, and with a rich, hoppy aroma and pleasing level of bitterness in the finish. The taste is a fine blend of malt foundation and hop structure. Change is good. After all, IPA is now a household term, a beer that is both a science and an art form in perpetual evolution. Whoever brewed this new beer would have to be well acquainted with today’s styles and substyles. 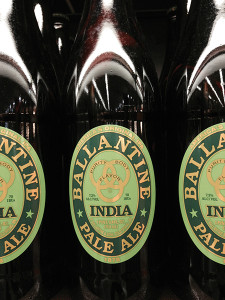 The new label is handsomely altered to reflect the elegance of the beverage within. I’m still quite fond of the old label, though I was hoping that they would not revive the little blurb that once was used to describe the provenance of the ale (they did not). That three-sentence paragraph had the distinction of being 100% wrong: “Discovered in the Spring of 1824 – purely by chance – when a keg of rare ale was opened after a sea voyage between England and Calcutta. The old sea captain and his crew first thought that the rocking of the ship had created this new, vigorous malt beverage. Actually, its hearty, robust flavor developed during the aging in wood.”

The old Ballantine IPA was said to have been aged in wood. That might be so, but it’s not happening with the new version.

Ballantine has a rich history. The brewery was founded in Newark, NJ, in 1840 by Peter Ballantine, a Scottish emigrant. By 1879 it was the sixth largest brewer in the U.S., and reaching fourth place at its peak. Ownership changed a couple of times after the last Ballantine son died in 1905, and with a decline in popularity the brewery closed in 1972. The brand has been owned by Pabst in recent years.

In mid-September a shock wave ran through the beer community – some called it a panic – when it was rumored that the owners of Pabst and its portfolio of beers would be sold to a Russian company. The agita abated when it was learned that the proposed purchaser is an American named Eugene Kashper who runs a company named Oasis Beverages based in Cyprus. According to one report, Kashper was six years old when his Jewish parents left the Soviet Union in 1976 and moved to the U.S. Kashper graduated from Columbia University in 1992 and proceeded to create brewing businesses in former Eastern Bloc countries.

Pabst Brewing’s headquarters has been in Los Angeles for several years, and Kashper says that it will remain there. In addition to Ballantine, the Pabst portfolio includes 23 brands, including Schlitz, Old Milwaukee, Schaefer, Schmidt’s, Stroh’s, Lone Star, and Heileman’s Old Style.

Jack Kenny has been writing The Beer Column for The Connecticut Beverage Journal since 1995. Write to him  thebeercolumn@gmail.com