Beer Column: Yes, We Can, The Advantages of Canned Beer

Ten years ago, Oskar Blues Brewery in Colorado began canning its award-winning Dale’s Pale Ale. No bottles, just cans. Since then, in the United States alone, 1,938 different craft beers have been poured into cans for consumption. Of those, 1,476 are still around (the others were occasional or have been retired), produced by 410 breweries in 49 states plus Washington, DC. Statistics enthusiasts can see more at CraftCans.com.

Cans have dominated the beer market for years, of course, when one includes commercial lagers in the mix, and their consumption is on the rise. The Beer Institute says that in 2006, cans accounted for 48.3% of the market, bottles 41.9% (draft beer makes up the difference). Six years later, cans were at 53.2%, and bottles dropped to 36.5%.

Anyone of a certain age with a fondness for quality beer knows that at some point in time the can became slightly less desirable than the bottle. What caused that? Snobbery, yes. But detractors claimed that canned beer had a metallic taste. Did something from the aluminum container make its way into the liquid via a chemical reaction? That’s highly unlikely. What probably happened, and still does, is that the person drinking a beer directly from a can gets a nose full of beer aroma as well as a whiff of metal from the can just millimeters from the nostrils.

Has anyone who’s drunk beer from an aluminum keg ever complained about a metallic taste? No. Anyone have a problem with Coke from a can? No. Plum tomatoes? No. The solution to avoiding a perceived metal smell is to pour the beer into a glass and then drink it. Case closed.

A few months ago I attended a beer tasting at which the guests, about 20 of them, engaged in a blind tasting of Sierra Nevada Pale Ale, both from a can and from a bottle. Asked if they could tell which came from which container, half were wrong and half were right. Case closed.

We live in an era of exceptionally high technology, in which engineered coatings are far beyond the comprehension of us regular folk. Scratch-off game tickets, for example, are coated with layers of compounds designed to thwart counterfeiters, and are changed on a frequent basis. Coatings on the insides of beer and other food cans are engineered to keep the contents free of contamination and in their original state. The fact is, the metal doesn’t touch the beer. 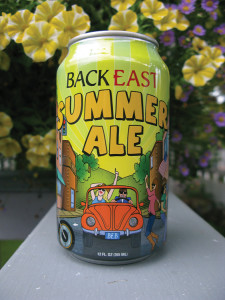 Summer Ale from Back East Brewery, Bloomfield, CT, which cans all of its beers.

Craft beer in cans is taking off, sometimes to the consternation of retailers, who must find shelf and floor space for more four-, six- and 12-packs. This summer’s crop of 12-pack cans included such crafty names as Sam Adams, Harpoon, Otter Creek, Brooklyn, and Two Roads.

Folks ask for cans at retail mostly because the packaging suits their recreational styles. Cans are easier to pack, and much faster to chill. Boaters don’t want glass on board. Golfers find it easier to stow and handle cans. At poolside, the can is the container of choice, because bare feet and glass don’t get along.

But the deep, esoteric truth about a can of beer is this: It’s as pure as it gets.

The number two enemy of beer is oxygen. The eighth element, the most corrosive substance on earth, can enter a beer bottle through a slightly defective cap and work its dark magic on the liquid. Cans have a better seal and a better record of keeping oxygen at bay.

The next time a customer squints at the suggestion that a particular canned beer would be ideal for his or her enjoyment, roll out those two truths. They might not take the bait, but at least they learned something.