Brand Focus: Making a Friend for Life with Laphroaig Scotch 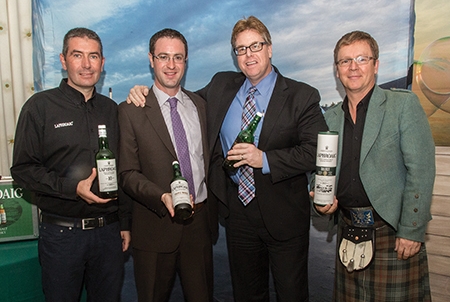 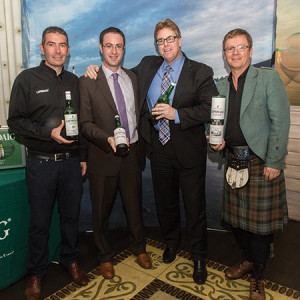 On Tuesday, October 21, 2014, I was invited to an interview and private tasting with John Campbell, Master Distiller of Laphroaig and the brand’s ambassador, Simon Brooking, at the Artisan Restaurant in Southport, Connecticut, on behalf of The Beverage Journal.

Campbell has worked with Laphroaig for 20 years and has been the Master Distiller since 2006. Before he was part of the scotch crafting team in Islay, Scotland, he was a lobster fisherman. As he was looking for  a more financially stable employment that would allow him to build a strong foundation and future, he found himself at the Laphroaig distillery.

Campbell never planned on becoming the master distiller, but he said he just kept putting his hand up when tasks arose and that he just got lucky. Malting is his favorite part of the process: he calls it an “art form,” as it’s the only part of the process that needs adjusting. “When malting, you need to be aware of outside changes in temperature and humidity and make slight adjustments. It’s the best; Barley needs tending to all the time. Two hundred years of getting the distilling and mashing right is something you don’t want to muck up.”

Laphroaig has been making their single malt for 100 years and distilling scotch for what will be 200 years in 2015. The compound is considered a farm distillery, as it started in the offseason as a project for the farmers to occupy their extra time during the winter months.

Their scotch is considered the biggest peated single malt in the world. It takes 33 people to operate the Laphroaig distillery, but only a team of nine to craft the 250,000 cases a year they export. The spirit crafting team consists of “maltmen” (who are considered the farmers), the quality checkers working in the warehouse (who are dubbed the “keepers of the cask”), an apprentice and the master distiller.

The remainder of the team consists of engineers, management, and the visitor center staff. Within the United States there are 16 “Protectors of the Peat;” Connecticut’s own Mike DePasqua, of Beam Suntory, happens to be one of them. These individuals are the specialists of everything Laphroaig stateside.

Nearly 70 to 80 percent of Laphroaig drinkers are drinking the 10 year, which is both Campbell and Brooking’s favorite. Campbell states that “when drinking scotch, there are no rights or wrongs.” Personally, he chooses to enjoy his single malt neat. When pairing food with Laphroaig the following suggestions were made: 10 year old with seafood, quarter cask pairs well with a meat dish or milk chocolate, triple cask couples well with steaks and 18 year compliments a dessert the best. I asked Campbell how he felt about Laphroaig being used in cocktails. “The journey needs to start somewhere” and [cocktails] are a gateway,” he said. Campbell’s favorite Laphroaig-based drink is the “Penicillin,” a concoction of the Blended Scotch, Islay Scotch whiskey, honey-ginger syrup and lemon juice. 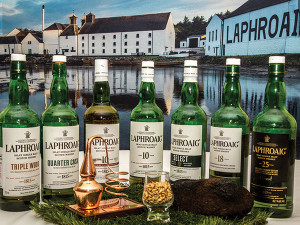 As sales are up 17 percent this year in the U.S., he sees great potential for the growth of exportation. The secondary markets are where the company is seeing the largest exponential growth overall.

A few facts about Laphroaig: it is the only scotch that has barley that is first cold-smoked, and then consequently dried. The barrels are kept in a warehouse with damp, three-foot thick walls. Ash floors keep the barrels at the same temperature throughout the year. Almost 1.8 million liters of water from the Kilbride Dam is used per day. The majority of that water is recycled into the cooling process. Silent season occurs when it is too warm to distill: the higher ambient temperature will change the flavor.

Laphroaig has a consumer advocacy program, “Friends of Laphroaig.” The program has been running for 20 years, with a growing a membership of over 630,000. With each bottle of Laphroaig comes a passport to Islay which offers a claim to a square foot of their farm on the island. This program brings over 23,000 visitors to the distillery yearly.

Brooking said he finds that people coming to visit Islay is the most rewarding during the warm summer months. Both he and Campbell agree that the most dramatic part of the journey is driving to the coast up into the hills, and descending down into the sea lochs in order to hop on the ferry.

As Campbell said, “ If you make the journey to come and visit, we’ll set you up with a hat, scarf, and some wellies and throw you out into the peat bog so you can stake a claim for your clan.” So get yourself or a “bigyin” [Scottish slang; used as a term of endearment towards older relatives or friends] a bottle and make a friend for life.

Chris Almeida is a market representative and photographer for TheBeverage Journal. An active member of the cocktail community and bartender at The Eddy in Providence, Almeida is United States Bartenders Guild member and publishing a cocktail-centric book called “Cocktails of Providence.”