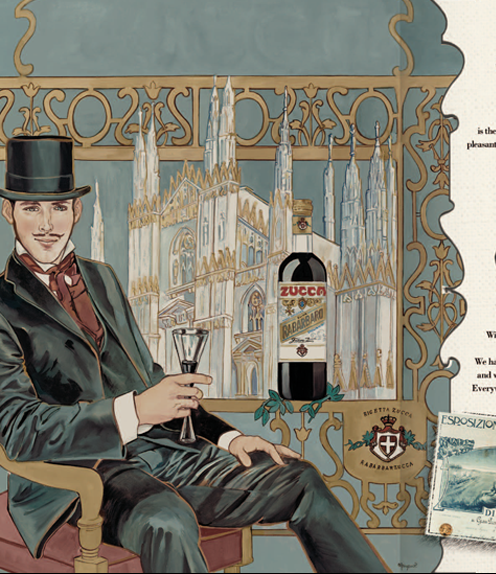 Though Zucca was created in 1845 by Ettore Zucca as a rhubarb-base prescription for indigestion, in its next generation Zucca Cafés became fashionable meeting points for musicians, artists and writers in major European cities.

Rhubarb-Powered Zucca Gets A Boost, With Eye On Bartenders

Sweet, salty, sour and umami are the most easily approachable when it comes to the flavor senses, but bitter hasn’t felt quite as cuddly toward American palates. However, alongside the popularity of IPA style beer, American drinkers, especially younger ones, are reaching increasingly for amaro and other bitter tastes. These new consumers are also selective about brand authenticity, which puts a product like Zucca, a balanced bitter made for over 175 years, smack dab in the sweet spot.

Zucca has gone through some transformations since it was first introduced as a medicinal digestivo in Milan in the 19th century, including a late 1990s/early 2000s version at a mere 16% ABV in a frosted apothecary-like bottle. Disaronno re-launched the brand in 2016 with a sleeker, bar-friendly bottle shape and retro label; they also brought the proof up to 60 (30% ABV).

When it comes to choosing an amaro, Zucca Brand Ambassador Matt Hirsch says to think of the “amaro flavor arc.” Some amari fall on the most bitter/medicinal side of that arc, and some show much sweeter. He says the lower proof made Zucca taste more like a sweet style of amaro, but raising the proof brought its flavors—showcased by Chinese rhubarb as its botanical base—in the middle. “When you first taste it, you get that sweetness, but then on the finish, you get the herbal notes,” says Hirsch. “Bartenders love that because it sits in the middle [flavorwise] and gives them a little of everything that they look for with most amari.”

Hirsch notes that whether a bartender is well versed in amari or is new to tasting it, Zucca, which was awarded a Platinum medal and 96 points by the 2016 International Review of Spirits, seems to immediately spark drink creativity. “The rhubarb rootstock makes it taste slightly smoky, so it’s a natural match for spirits like mezcal, which bartenders like to use,” Hirsch says. He adds that the rhubarb component makes strawberry a natural companion ingredient—like a boozy, liquid version of strawberry rhubarb pie.

While it makes sense Zucca is a staple in built-in bitter-friendly establishments such as New York City’s Amor y Amargo, because of its versatility it’s also finding its way onto menus in less likely venues, including on tap at Miami Cuban cocktail bar Abi Maria in their “Camaguey” cocktail. It’s also featured at Two Ten Jack in Nashville, a cocktail-focused ramen joint that bestowed the name “No. 1” on their drink made with Zucca, gin, tamarind, passionfruit syrup and lemon juice because it has always been in their first tap position.

Paul Warren of Disaronno International says to expect big “Zune” and “Zuly” campaigns this summer to drive sales on- and off-premise with a mix of marketing materials and boots on the ground to taste and educate staff.

Hirsch reminds that for many drinkers, the best way to learn about new products and categories is through a knowledgeable bartender or sales clerk. He says when he himself first became familiar with the category, “It wasn’t an ad or billboard, it was one-on-one interaction with someone who knew what they were talking about.”

In terms of authenticity, it’s important to consider that Zucca, born in Milan, was among the first amari ever created for medicinal purposes as a cure for indigestion. At over 175 years, it predates many familiar brands like Campari, and has been the inspiration for others. “What other brands are trying to create, we already have,” says Hirsch.