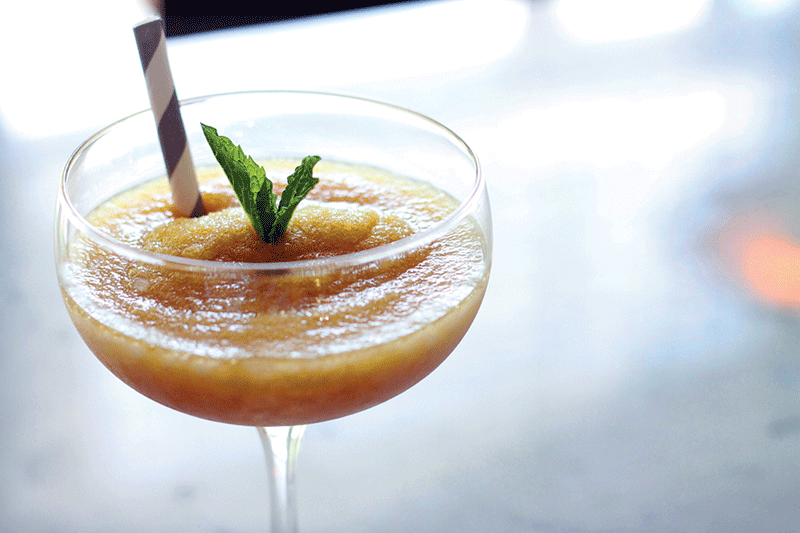 Slushies and such are all grown-up, thanks to technology, creativity…and rosé.

Of all the beverage types that joined in the contemporary cocktail revolution, frozen drinks were left wallflowers, uninvited to the cool kids’ table.

Outside of Tiki, which has always welcomed the qualities that frozen offers, it was a style mostly left to chains churning out schooners of fruit-laced Margaritas and Daiquiris. In the past couple of years, creative cocktail makers with a well-developed sense of fun took advantage of equipment and ingredient evolution to whip up tasty adult treats.

Interestingly, in a rare recent burst of influence from chain restaurants, frozen drinks are making a return to their place as fun and easy ways to drink.

A good example is the Italian-themed Carrabba’s, the 200+ unit Tampa-based Bloomin’ Brands’ chain. Their most popular limited-time offerings last year, according to research firm Datassentials, was the rosé-based Italian Ice Frosé. Currently, the Carrabbellini, a frozen version of the Bellini made with peach purée, schnapps and sparkling wine, leads the drink menu.

The many versions of Frosé—a rosé-based drink that includes, depending on the maker, liqueurs, citrus, sugar, vodka and other ingredients—exploded into drink consciousness last year. In fact, Zack Silverman, co-founder of frozen mix supplier Kelvin Slush Company says their frosé blend is now their best seller.

After that early success, Kennedy decided to create a series of frozen wine drinks, and recently added the Riesling-based “Friesling.” Getting the flavor balance right was key. “I wanted to match the aromas and flavors you associate with the wine,” he says. “With Riesling, it’s apricots, peaches, stone fruit and white flowers. And I was looking for ingredients to enhance the qualities of wine.” The ultimate combination— Riesling, peach liqueur, St-Germain and lemon—needed no additional sugar.

Launched in January, a time one would associate with brisk winds, not brisk frozen drink sales, the Friesling was a hit, selling about 30 an evening; not bad considering Cote sold about 60 Frosés a day last summer. The drink will run into the summer and be replaced by the Frosé. Then, for the fall, Kennedy is considering a frozen red wine-based drink.

Many operators are using slushy machines on a variety of popular drinks. Abuelo’s, a multi-unit Tex-Mex chain, serves a layering of frozen Sangria and Margarita in their Sangria Swirl, combining the chain’s two top-selling drinks, according to Brian Bell, Vice President – Beverage for owner Food Concepts International. At the 12 Perry’s Steakhouse & Grilles located in Texas, a house version of Frosé, the Rita Rose Olé, is a Margarita-ish mix of rosé with tequila finished in Cabernet barrels.

Even Taco Bell Cantina, the fast-casual, urban-targeted Taco Bell off-shoot, is offering frozen drinks with a kick. Called Twisted Freezes, in orange, cherry, blue raspberry and pina colada alcohol-free form, the drinks can be customized by guests with rum, tequila or vodka. And Chipotle is testing—in Manhattan—a Frozen Paloma Margarita made with Sauza Tequila, citrus juice and agave syrup.

Frozen’s foray back into drink consciousness has even crashed the dessert menu. In Davidson, NC, bartender Blake Pope at Kindred created “Take Two of These & Call Me Amaro” as a dessert drink. Made with Fernet Branca, St-Germain and lime juice in a slushy machine, the drink is a constant on the menu.

At Arbella in Chicago, bartenders use science to freeze their custom cocktails. The drink ingredients are combined in a bowl, then liquid nitrogen is poured into a vessel around that bowl, transferring the freezing temperatures without adding ice. The cocktail freezes as the mixture is whisked continuously. Pictured above, the Snow Cone, served with a pipette of Red Bull syrup

“We had tossed around the idea of having it on the cocktail menu but after some debate it totally made sense to live on the dessert menu, given its digestif qualities” says Pope. “Fernet tends to be a bit aggressive so we needed to find some ingredients that could assist in balancing it. St-Germain offers a delicate floral contrast that really assists with the balance. Then we add fresh lime juice to brighten up the acidity and now you’ve got the perfect trifecta of bitter, floral and acid.”

Pope credits improved equipment quality for the frozen drink’s return: “There are so many great machines on the market. We’ve seen a lot of bar programs shy away from the overly serious attitude and from a more playful spirit. That’s what we’re all about. Nothing says fun quite like a well prepared frozen drink.”

There are those who push the limits. At Chicago’s Arbella, Beverage Director Eric Trousdale serves drinks employing liquid nitrogen. “It’s absolutely the best way to do frozen cocktails. It doesn’t add any dilution and results in the smoothest texture and mouthfeel,” says Trousdale. The Queretaro, named after a summer treat sold in that Mexican city, features tequila, lime juice and Cointreau, frozen to order, and topped with a red wine float.

And it provides a “smoke show,” he adds: “We always look at it as the cold version of a Blue Blazer. A lot of people haven’t seen it done and it certainly turns heads. It’s one of those things where when you make the first one, you know you’re about to get ten more orders.”

It’s exactly what Kennedy thinks: “Who doesn’t love the texture of a frozen drink? It’s instant escape, and you can make them with high quality ingredients and still make very high margins on them.”