The Bureau National Interprofessionnel du Cognac released data stating that for the third year running, Cognac exports grew in 2017, reaching their highest ever levels in both volume and value. These results are despite the April 2017 frosts, which in the end affected production less than anticipated.  With nearly 98% of production exported, the Cognac appellation expanded its export markets in 2017, witnessing growth of more than 10% in volume and 14% value. In total, around 197.4 million bottles were exported this year, resulting in a turnover of €3.15 billion euros. With 86.1 million bottles exported in 2017, volumes rising 11.4% and value up 12.6%, the bureau reported  that NAFTA area has performed consistently well and continues to lead the way in Cognac exports (43.6% of exports). The USA continues to be Cognac’s largest market with 82.6 million bottles exported in 2017. “The historic presence and ongoing investment of our Houses/brands in the United States make the strong performance of Cognac exports to this market possible,” said Patrick Raguenaud, President of the Bureau National Interprofessional du Cognac (BNIC). 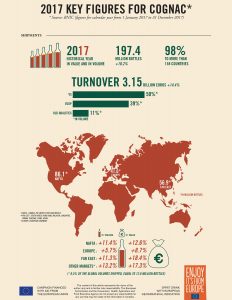 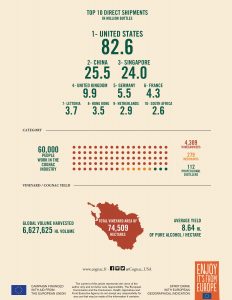