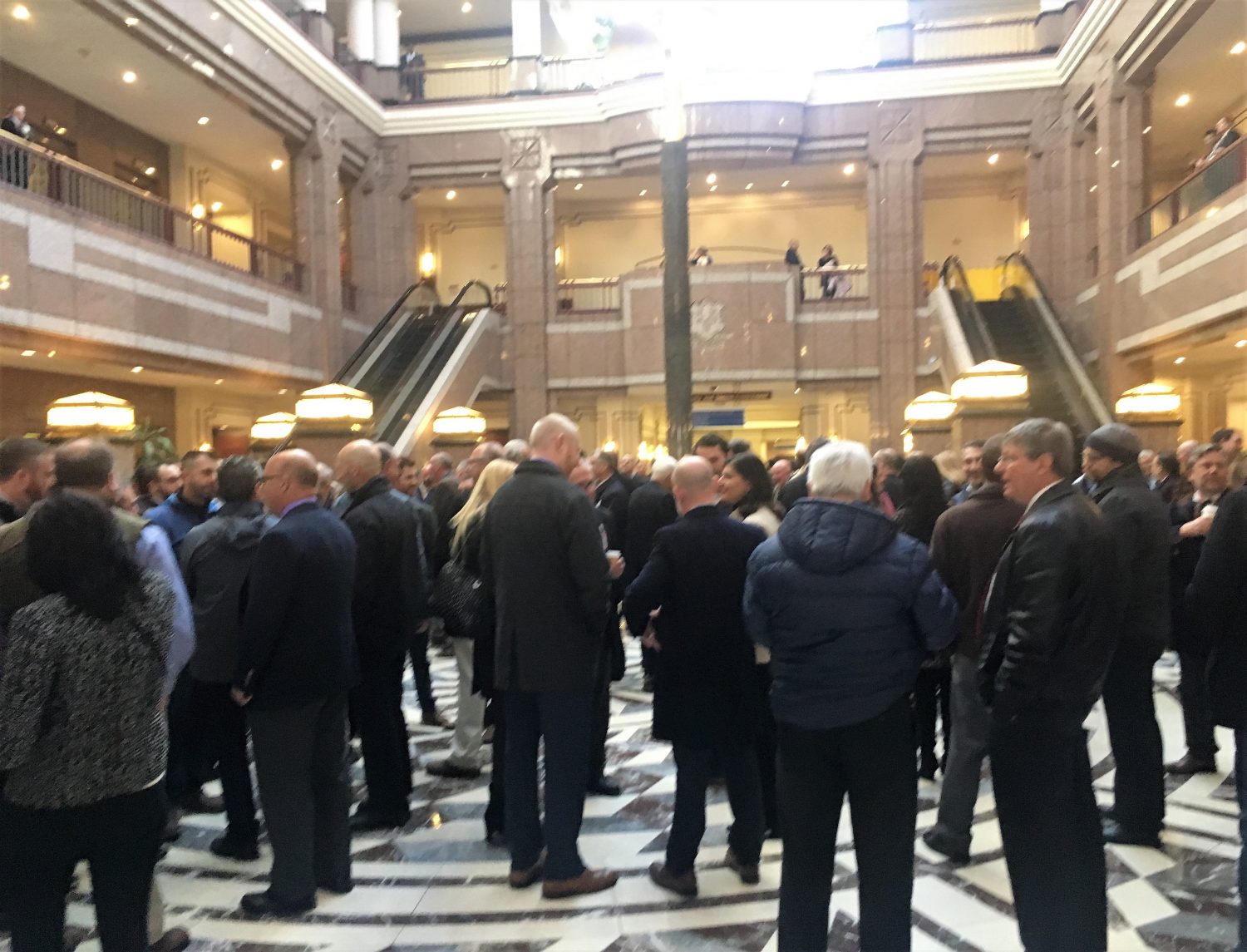 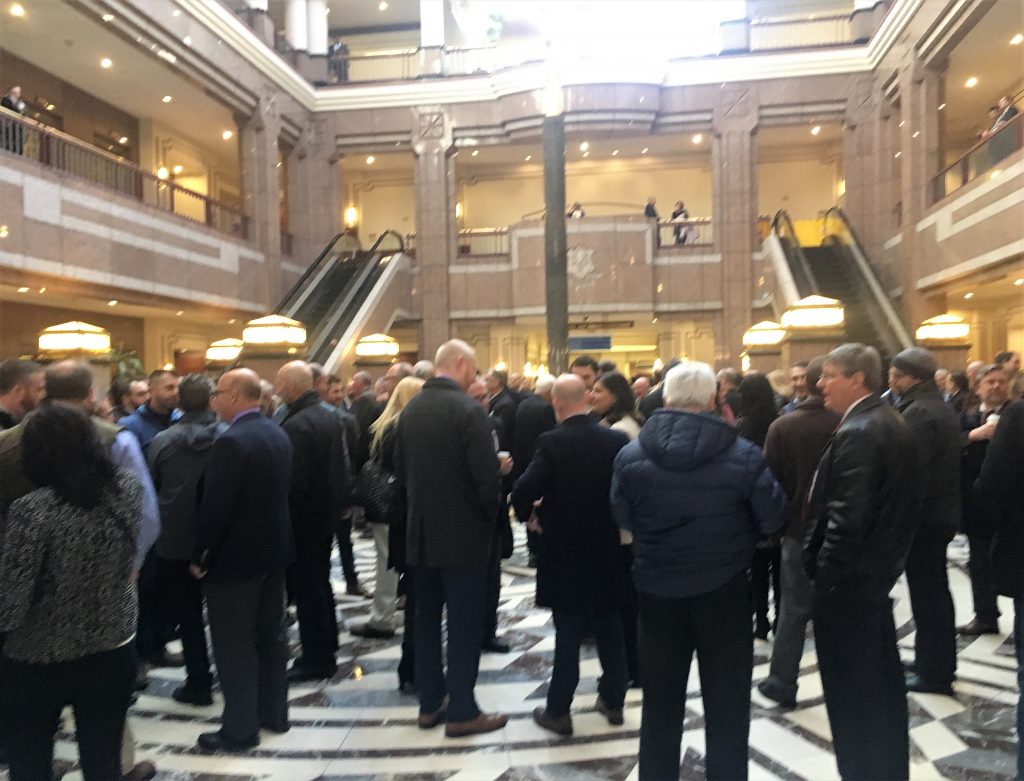 Connecticut beverage trade gathered at the Legislative Office Building in Hartford on February 28, 2019.

Package store owners, distillers, brewers, trade association representatives, wholesalers and other members of the licensed beverage industry in Connecticut converged at the state legislative building on February 28 in response to proposed legislation that could potentially alter areas of existing liquor permits and sales.

The day showcased the complexity of the state’s beverage industry, with legislators trying to understand the long-standing balance between all business bases in the federal and state three-tier liquor system while seeking to modernize elements of existing regulations to account for the growth of local producers and their supply chain options.

Representative Mike D’Agostino (D–Hamden), Co-Chair of the General Law Committee, began by issuing a disclaimer that the proposals were not designed to “eliminate minimum pricing or change the three-tier system” but designed in order to “reflect the growing craft industry,” also stating that “a lot of our liquor laws are 20, 40, 80 years old.” At bat were sections contained within HB 7184, HB 7183 and SB 647.

The most contentious testimony highlighted provisions within each of the three bills that would change the following, most notably: brewpub and distillery permits allowances for types of consumer sales, eliminate wholesaler sales territories, specifically in beer distribution, allow for beer sales in “big box stores,” allow out-of-state wine shipping to consumers, increase the number of liquor store retail permits per person or company and allow stores to sell a greater number of items at a discounted price per month.

Carroll J. Hughes, Executive Director of the Connecticut Package Stores Association (CPSA), addressed the following bills from the package store perspective: “All three of these bills are almost designed to completely eliminate and give a termination date to small retailers and actually wholesalers in this state,” he said. “7184 is a bill you couldn’t have written better to destroy the liquor industry in Connecticut. It has provisions in there which are designed and written in some corporate board room far from here designed to eliminate small retailers and wholesalers.”

D’Agostino disagreed with Hughes’ statement, saying, “That’s just categorically untrue, and I do resent the implication that this committee is somehow in the pocket of someone else … we decide what we want to put in we massage the language … they are not written someplace else, they’re written by these legislators representing constituents and consumers.”

Larry Cafero, Executive Director of the Wine & Spirits Wholesalers of Connecticut (WSWC), noted that while it may not have been the intention of the General Law Committee to resurrect the minimum pricing issue, it was being addressed indirectly, and unintentionally, by some of the provisions in the bill. Cafero further supplied detail to the committee about the role of wholesalers in the marketplace, giving perspective to the overall alcohol sales landscape.

On the table was also proposed legislation to give brewpub and distillery permit holders the ability to sell greater volumes of their products on-premise to consumers. Testimony was supplied by many breweries and distilleries who sought more autonomy or diversity in how they can market and sell from their venues, be it by cocktail, bottle or case.

Tom Dubay and Lelaneia Dubay, Co-owners of Hartford Flavor Company, testified in favor of allowing the sale of spirits in cocktails using their products in distillery tasting rooms. Tom Dubay said he would also like to have parity with wineries, breweries and distilleries in surrounding states with the ability to “operate with a distillery license much like a brewpub license.” He said he would also like to see the restrictions placed on distilleries eased, allowing the ability to sell a greater number of bottles of product to consumers. The current laws are much like “requiring a restaurant to only sell take out,” Dubay said.

Many in the room supported the provision in HB 7148 which would allow Connecticut breweries, wineries, meaderies, cideries and distilleries to cross-sell each other’s products to highlight local brands.

Phil Pappas, Executive Director of the Connecticut Brewers Guild, testified on behalf of the interests of Connecticut’s independently owned craft breweries, speaking in favor of the “increase of direct to consumer limits for off-premise consumption … Our Connecticut breweries lose sales, and the state [of Connecticut] loses taxes, every single day due to this low limit, because we are forced to tell our customers they legally can’t buy more, and collectively lose revenue to out-of-state breweries every week.

“Our neighboring New England states …. do not have any limits, or much higher limits, on direct to consumer sales, so it’s time we make changes in order to attempt to compete with these states. The added benefits of increasing direct-to-consumer sales limits will only continue to add to the massive economic impact that our industry has on our state, allow our breweries to reinvest in our businesses, create more jobs, increase our total production, and simply sell more of our product,” said Pappas.

Dan Meiser, Chairman of the Connecticut Restaurant Association (CRA), spoke in favor of the three-tier system, and said if changes were to be made, he wants to work “together with the council to prevent unintended consequences” of changes to the system. He also spoke in support of independently owned craft breweries and wineries, while stating his opinion that those businesses should still be subject to the same laws as restaurants when selling products.

“We, as an association, support Connecticut breweries being able to manufacture and sell their own beer both over the counter in the form of a pint for on-premise consumption and to-go for off-premise consumption,” said Meiser. “And we also support the three-tier system. And if folks would like to open a restaurant and serve vodka sodas and other people’s beers and other people’s wines then that’s great and we support that and we would hope that the rules and regulations that are applied to us as a restaurant holding a class one food license, that those would be applied in those instances as well.”

He continued, “If your intention is to sell products that you are not manufacturing on site, then you should be subject to the rules and regulations that Connecticut’s bars and restaurants are subject to.”

The Beverage Journal will continue to provide updates online and in print as the story develops.