Conn. Legislative News: Bills That Could Impact Your Business 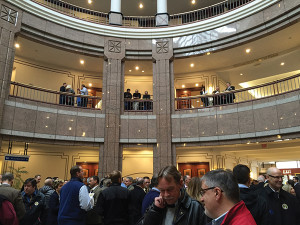 The lobby of the Legislative Office Building in Hartford filled early for the February 23 public hearing on S.B. 14.

A number of bills concerning the alcohol industry went before the Connecticut Legislature this 2016 session. Here is a brief rundown of proposals that could impact the state’s beverage industry and their status as of March 15, 2016.

Most notable is Senate Bill No. 14: “An Act Ensuring the Regional Competitiveness of Connecticut’s Liquor Prices,” which could potentially impact thousands of industry workers across the state. Introduced by Sen. Martin M. Looney, 11th Dist., Sen. Bob Duff, 25th Dist., Rep. J. Brendan Sharkey, 88th Dist. and Rep. Joe Aresimowicz, 30th Dist., Gov. Dannel Malloy’s proposed bill would remove the minimum bottle price posting. At a February 23, public hearing, among those who testified in support of the bill included the Yankee Institute for Public Policy, who submitted: “Connecticut is the only state in the nation that regulates liquor by setting a minimum price per bottle. This practice should end, and retailers should have the freedom to decide how to price their products.”

However, at that same packed-house hearing, wholesalers, store owners and representatives from the Connecticut Package Stores Association (CPSA), Wine & Spirits Wholesalers of Connecticut (WSWC), Teamsters Local 443 and the Connecticut Beer Wholesalers Association (CBWA) were among the larger majority who showed up to oppose the bill. CBWA testified that “eliminating the minimum bottle [price] will have a negative impact … and just one change to our current system is like a domino effect — it will put Connecticut local package stores and small distributors at risk.”

STATUS: The bill has gone no further than the General Law Committee.

House Bill No. 5324
The act would streamline the alcoholic liquor permitting process.

House Bill No. 5428
The act would modify the number of bottles allowed in cases of alcoholic liquor, other than beer, cordials, cocktails, wines and prepared mixed drinks.

House Bill 5329
The act proposes expanding Sunday alcoholic liquor sales hours at restaurants and certain other permit premises from 11 a.m. to 10 a.m. It was introduced by the General Law Committee and co-sponsored by Rep. Jeffrey J. Berger, 73rd Dist. At a Feb. 23 public hearing, the Connecticut Restaurant Association (CRA) testified in support of the bill, stating: “Many restaurants across Connecticut serve brunch on the weekends, beginning service at 10 a.m. … but are prohibited from serving typical brunch items like Bloody Mary’s and Mimosas until 11 a.m.”

STATUS: The bill has passed the General Committee and now moves to the House, according to the CRA.
Other industry bills with no update as of press time include:

Senate Bill 384
The bill proposes expanding the bottle deposit to include wine and liquor bottles, beyond the current water and soda bottles and cans, to fund state parks. The DEEP testified that with adding liquor and wine bottles to the redemption system, the bottles would also be recycled at twice the rate.

The bottle bill expansion would mean a 15-plus cent deposit on wine and liquor bottles. The WSWC testified that “[while] the the goal may be laudable … there must be an understanding of the economic effects this bill will have on the consumer, the state and the wine and spirits industry.” CPSA President Stephen Downes testified: “We suggest DEEP negotiate with the product manufacturers to develop a product stewardship program since the companies are making substantial profits in recent years. It may be easier to deal directly with the manufacturer or the Distilled Spirit Council of the United States, to gain success in such an effort.”

House Bill No. 5323
The act would require common carriers to report the transportation of alcoholic liquor into the state. It was introduced by the General Law Committee. The Connecticut Small Brand Council testified in support of the bill on Feb. 23, stating: “Out-of-state retailers are shipping to CT consumers and are not paying the necessary taxes. This bill will remedy that situation.” The WSWC offered data pointing to an $8 million revenue collection opportunity.

Senate Bill No. 188
Introduced by the General Law Committee, the bill proposes extending farm winery Sunday sales hours from 11 a.m. to 10 p.m. and to allow free wine tastings of farm wine at farmers’ markets. The Connecticut Farm Bureau testified in support of the bill: “This change will make the house of operation consistent with other days of the week and allow farm wineries to fully take advantage of weekend traffic and tourism.”

House Bill No. 5325
The act proposes to allow the Department of Consumer Protection to waive certain restaurant permits for catering establishment requirements for up to 16 functions, occasions or events annually. It was introduced by the General Law Committee. Rep. Anthony J. D’Amelio testified in favor of the bill: “In the greater Waterbury area, we’re fortunate to have several banquet halls that would like to host community gatherings to showcase their food and facilities but are currently very limited. By removing the restrictions … the community has more food and entertainment options.”

Senate Bill 193
The act proposes to increase the population threshold requirement for the issuance of a package store permit. Introduced by the General Law Committee, it proposes that Section 1 Section 30-14a of the general statutes is repealed and amended, to be effective January 1, 2017. Currently, the Department of Consumer Protection may issue one package store permit for every 2,500 residents of a town. The bill proposes that it be raised to 7,500 residents of a town as determined by the most recently completed decennial census. Connecticut Small Brand Council testified in support of the bill on Feb. 23, stating: “This will strengthen the current package store marketplaces by increasing the population to store ratio.”

Senate Bill 195
Introduced by the General Law Committee, the act would prohibit package stores and certain other alcoholic liquor permit holders from selling or dispensing alcoholic liquor on Easter Sunday. The Connecticut Small Brand Council testified in support of the bill on Feb. 23, stating: “There is currently no benefit to the state in terms of revenue for stores to be open on Sunday, and like with the Christmas holiday, stores should be closed.”

Read full text of bills at https://www.cga.ct.gov/. The Connecticut Beverage Journal will be following these bills throughout the legislative session.