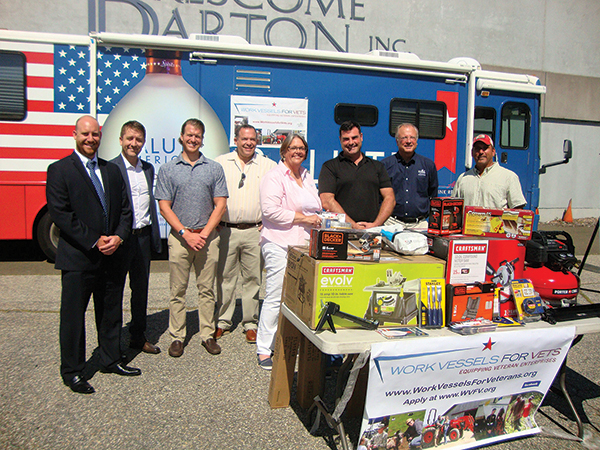 Salute American Vodka, Brescome Barton and Work Vessels for Vets, Inc. awarded Navy Veteran James Wright with $1,000 worth of tools to start his own business, General Handyman Service LLC, on July 26, 2017. The first dollar of every bottle of Salute American Vodka sold goes directly to organizations like Work Vessels for Vets, to assist veterans in their transition from military to civilian life. Veteran U.S. Navy Petty Officer James Wright served nine years as a Hospital Corpsman and as a member of the Navy’s elite Search and Rescue Team. He also served in the U.S. Marine Corps to forward divisions in Iraq and Afghanistan, where he was the doctor for 250 combat Marines, providing aircrew and emergency medical care in support of search and rescue missions. He received military decoration by the U.S. Navy and the U.S. Marine Corps. John Niekrash, Co-founder and Chairman of Work Vessels for Vets, Mike Heins, Trade Development Manager of Brescome Barton and Michael Lutz, Operations Manager for Salute American Vodka, presented the tools to Wright. During the presentation, Wright’s two-year-old son was onsite to help his father accept the award. 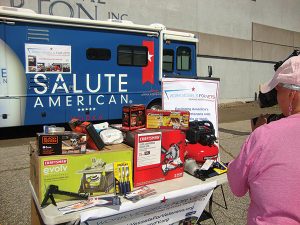 A display of the tools that were awarded to Wright to start his own handyman service company due to a partnership between Work Vessels for Vets, Salute American Vodka and Brescome Barton. 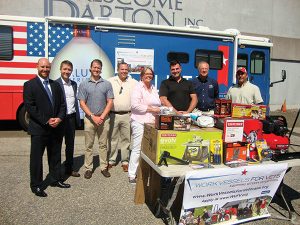