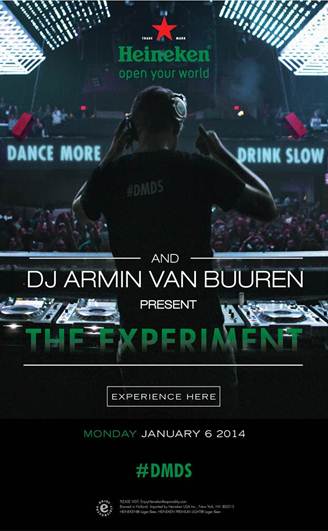 The collaboration was called “valuable to the EDM community because it promotes a movement towards a more responsible and safer dance space,” in the news release. “The Experiment,” a film featuring van Buuren and under the direction of PThilip Andelman – who has worked with Beyoncé, Rihanna, Jay-Z, John Mayer and Lenny Kravitz., brings the idea to “life.”

“As an industry leader, Heineken wants to contribute to the positive role of beer in society, by making moderation aspirational for consumers. We believe that we can be more effective in making positive behavior aspirational by utilizing our creativity and tackling the issue of abuse in an engaging and relevant way,” said Alexis Nasard, global chief marketing officer and president of Western Europe at Heineken.