July 2022 Cover Story: Vodka is Back in Vogue 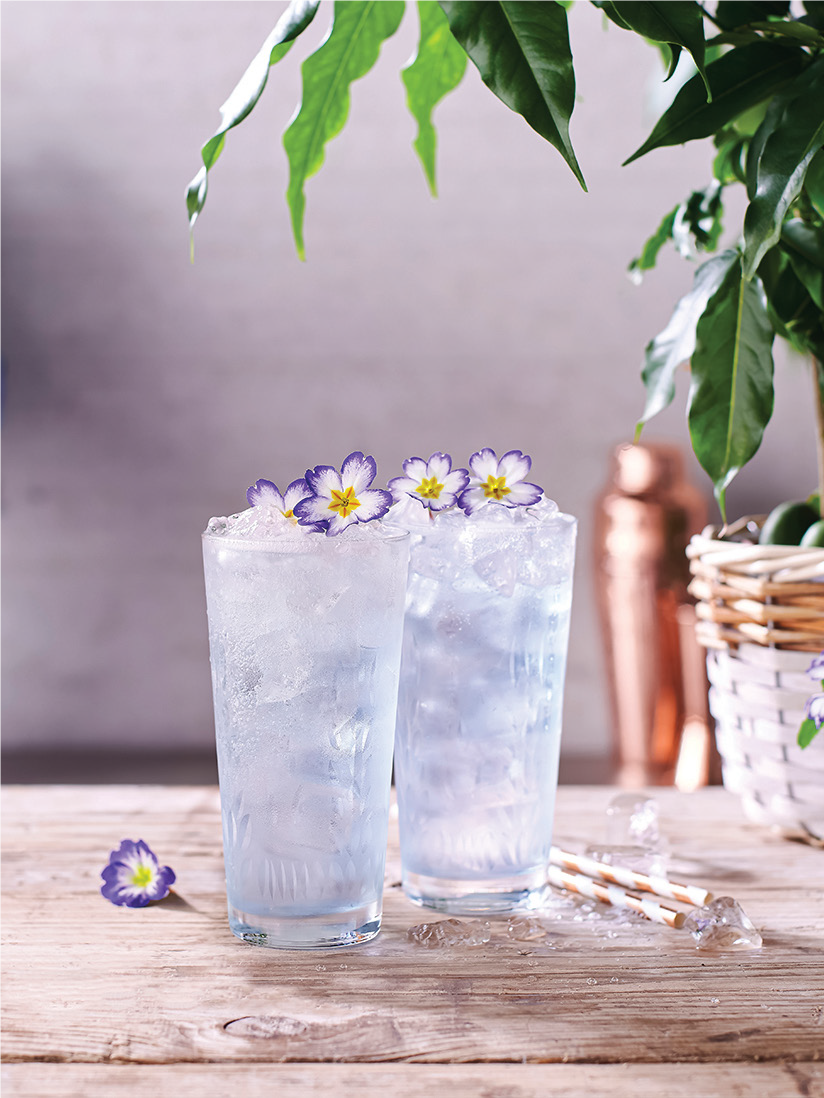 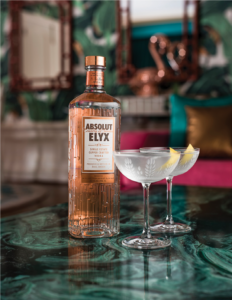 The buzz for all things vodka is back, with classic cocktails creating demand at bars and restaurants

There’s a change happening in the world of vodka. It may be subtle, and long in the coming, but it’s gaining momentum nonetheless. It’s a change in perception most of all. The types of consumers who previously wouldn’t consider ordering a vodka cocktail are now doing so in droves, specifically naming the top-shelf brand they prefer, and the bartenders who came up in an industry which labeled vodka the black sheep of the backbar are now innovating in the category with nostalgic recreations flooding the pages of the consumer press.

“We have seen considerable growth in sales in on-premise establishments recently,” says Estelle Horysa-Hubert, Absolut Elyx’s brand manager. “Our sales are surpassing pre-pandemic levels.” An ever-increasing push for premiumization has occurred across the spirits industry, but vodka, more than any other category, saw a drop off in sales of cheaper price segments compared to gains in the premium categories, according to the Distilled Spirits Council of the United States (DISCUS), losing 1.68 million nine-liter cases of sales in the lowest two price tiers, while gaining 3.6 million cases in the highest two tiers.

Even ahead of the pandemic, numbers were indicating a bump to vodka’s already lofty status. In 2019, total vodka sales on-premise were up 5.9 percent in the U.S., according to IWSR Drinks Market Analysis. But with consumers’ long-awaited return to the bars after the pandemic-era interruption, vodka’s on-premise positioning has only been further padded, and looks set to continue.

Vodka is by far the largest category in terms of total sales in the U.S. According to DISCUS, in 2021 vodka accounted for $7.3 billion in revenue with 78.1 million nine-liter cases sold. It’s no secret that vodka has long been a key driver of revenue for many on-premise establishments. “Vodka has been the top seller in bars for quite some time now—even with the rise of other spirit categories, such as American whiskey and agave spirits specifically,” says Tyson Buhler, the national beverage director at Death & Co.

As consumers head back to bars on the whole, though, they’re displaying more of a treat-yourself mentality, opting to upgrade their calls because after the past two years, they feel as if they deserve it. “Now, when consumers are going out for drinks, they’re trading up for top-shelf liquors that really enhance the entire experience,” says Katie Redlien, the brand director at Grey Goose, which has seen a significant increase in on-premise sales.

St. George Spirits has also benefited from this boon. “Understandably, people seem to really want to be back out at their favorite bars and restaurants,” says Dave Smith, the head distiller. “Some markets have seen minor growth, while others have roared back to life with strong demand and significant growth.”

Suffice to say, vodka’s status as a stalwart of sales but little else of relevance is changing, as is its currency in cocktail culture. Vodka is moving from the elephant in the room to, well, the elephant on the top shelf. Increasing demand continues to build momentum for the category. 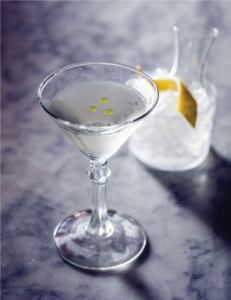 Many of the cocktails that seem to be dominating the conversation today—the ones that consumers walk into a bar and order by name even when they aren’t on the menu—are made with vodka, from the Vodka Martini to its caffeinated cousin, the Espresso Martini.

“Even the Cosmopolitan is making a huge comeback—[you can thank the new] Sex and the City streaming series [And Just Like That],” says Johnny Swet, the founding partner at Jimmy rooftop bar at Modernhaus SoHo in New York City. Alcohol has absolutely soaked the digital airwaves—alcohol brand’s digital ad spend grew 9% between 2019 and 2023, according to a Zenith report—and it’s driving some of the trends. “The marketing on TV and streaming services with product placement has gotten into our psyche,” adds Swet.

Go one step further and it’s easy to connect the dots with viral cocktail trends and endless TikTok how-to videos—like Stanley Tucci’s instructionals—and even the semi ironic odd sensations, including, yes, the Dirty Shirley, which has been bewilderingly posited as the drink of the summer by consumer publications far and wide. For those more classically inclined, though, the Martini reigns supreme. “The Martini is having a massive boom in both cocktail and pop culture,” says Redlien. “Last year, demand for Martinis increased by 25% at bars and restaurants nationwide, according to Technomic, and dominated pop culture, as we saw the Dry Martini, Dirty Martini, and ever-popular Espresso Martini take over our social media feeds.”

As for the Espresso Martini, it’s become a wrecking ball. “You can hardly walk through a bar or restaurant and not see at least one on a table at any given time,” says Buhler. The idea of cyclical trends, as well as the lure of nostalgia, is something Redlien, Buhler, and Horysa-Hubert each call out. “It’s a glamorous serve that’s been sipped for years and can transport the drinker to another era of elegance, and I think consumers are so drawn to the Martini right now because of how nostalgia is trending everywhere we look,” says Redlien.

A number of the cocktail renaissance’s early leaders famously banished vodka from their menus as a means of establishing their craft credentials. The pioneering Audrey Saunders, co-owner of New York City’s now-shuttered Pegu Club, didn’t carry vodka as a means of introducing drinkers to the then unfashionable gin. Vodka was previously defined as “without distinctive character, aroma, taste, or color,” by The Alcohol and Tobacco Tax and Trade Bureau (TTB), but both the attitude towards the spirit and its definition by the TTB has been updated, and many of the current crop of bartenders are now embracing it.

“Bartenders are driving the resurgence and reinvention of vodka as the world knows it, with key players like Leo Robitschek championing the spirit and showcasing its versatility in cocktails, giving vodka drinks the spotlight they deserve on their menus,” says Horysa-Hubert. 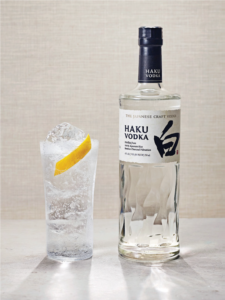 Haku Vodka is experimenting with vodka’s potential reach by pairing it with fo od, especially with other touted culinary touchstones of Japan, drawing a straight line that consumers can easily connect. “We’ve been focusing on our food-pairing programs in on-premise establishments that showcase Haku Vodka with a variety of gastronomic categories, including high-end sushi,” says Susan Gibbons, the senior director of North American marketing for Beam Suntory.

“Great chefs and leading mixologists across the country have embraced Haku as a spirit they can build great programs around,” adds Gibbons. For instance, during the early stages of the pandemic, chef Sonoko Sakai led virtual cooking classes pairing Haku Vodka highballs with her Japanese curry dishes. Meanwhile, at Chicago’s Bar Kumiko, Julia Momose has served up Haku Martinis and highballs in her cocktail flights and alongside dishes from the kitchen’s touted culinary program.

Flavored vodkas, which account for one-fifth of on-premise vodka sales, according to CGA’s On Premise Measurement, continue to thrive, particularly from brands with more natural processes and authentic flavors. The days of cotton-candy and bubblegum vodkas are long gone.

“Vodka drinkers tend to have their preferred call and are often less interested in exploring other brands,” says Smith. “They need to have a significant reason to go outside of their comfort zone. Naturally-made, premium flavored vodkas are one of the few ways we can connect with that person.” St. George has seen great success with its Green Chile and California Citrus vodkas, for instance, with the former being’deployed in Mules and Bloody Marys, and the latter in martinis.

While Death & Co. doesn’t dedicate much of their menu to vodka cocktails, Buhler calls out St. George as being among the craft vodkas which have long stood out to their team for “being made with a focus on spirit character,” in addition to options including DSP, Good, and Woody Creek.

Another growth area is vodka designed to be both lower in alcohol and calories. While most brands would stop short of denoting any alcohol as being good for you, consumers are showing a preference for drinks they perceive as healthier options. “Like most other categories, the spirits industry has seen a growing desire for ‘better-for-you’ products made with less calories, lower ABV, and quality ingredients,” says Redlien, pointing to the line of botanically-infused Grey Goose Essences as an example. “Since launching last winter, consumer reaction has been even better than we’d hoped for.”

‘The trends driving vodka’s current momentum aren’t going anywhere, and premiumization will continue to be paramount in the conversation. Of course, interest in premium vodka isn’t novel. “While we’ve continued to see people more interested in the premium end of the vodka market, the vodka category has been leading the charge in premiumization for decades,” says Smith.

One new point, though, is how consumer behavior changed during the pandemic to build atop that. “After so many months spent at home during the pandemic, consumers have really embraced the true luxury of ordering a craft cocktail at their local bar, served just the way they like it by their favorite bartender,” says Redlien. “It’s great to see consumers share this feeling, and we’re hopeful that the momentum will continue for the on-premise in the coming months.”