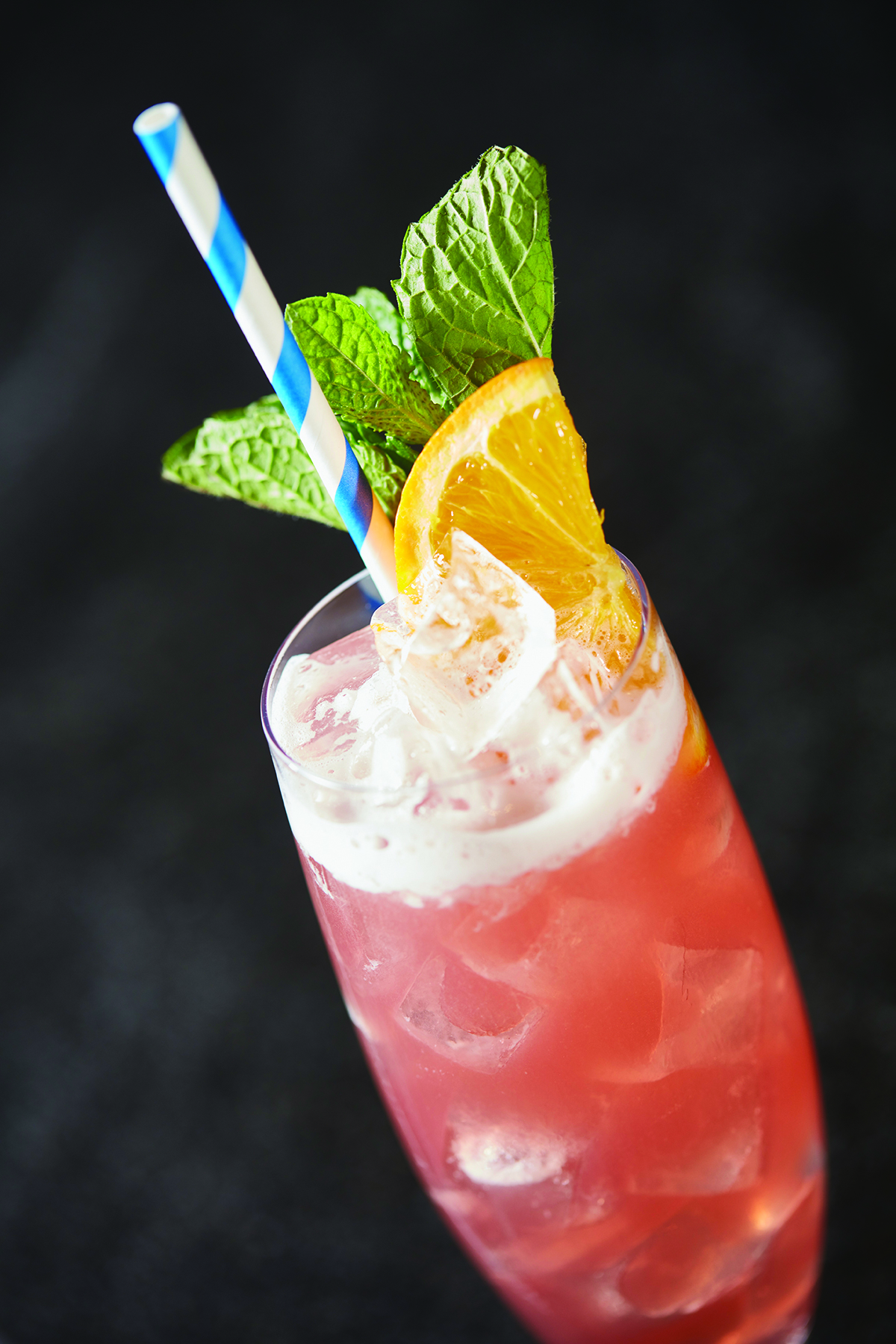 Lower-ABV cocktails can hold their own character-wise, powered by shrubs, syrups and fresh, potent ingredients.

Confronted by a Low-Alcohol Trend, From Suppliers to Servers, What Can (or Should) Be Done About It?

This is not out of the blue. The demand-spurred Low/No-Alcohol bulge in the beverage universe has been growing for several years in other parts of the world. Now it is happening here, in all three primary alcohol genres—beer, wine and spirits—and then some as spritzers and seltzers get busy leveraging their lower-ABV%. Some of the biggest players in the beverage alcohol industry are leading the charge to satisfy this escalating demand, ramping up new product development as they try to get ahead of the trend.

From a societal standpoint, 2019 is shaping up as a watershed year for low/no alcohol media attention. “They’re young, they’re fun and they’re alcohol-free” boomed the Chicago Tribune headline in February. Just this summer, TIME examined “Why Alcohol Companies Are Betting on Non-Alcoholic ‘Booze’”; The New York Times Magazine checked into “The New Sobriety;” USA Today explored “Fun Without Alcohol?” at “sober bars.” And all of those articles referenced the book Sober Curious, published at the end of 2018.

Is there a movement afoot? Should the beverage alcohol industry be trembling at the notion of sobriety as a “lifestyle choice”? Well, only fools would expect the industry to abandon its flagship ingredient completely. Then again, only fools would ignore signs of Low/No-Alcohol-Apocalypse in our midst, every day.

In New Zealand, Stoneleigh, a Pernod Ricard brand, is at the front edge of a conscious effort to produce vibrant, flavorful wine at 9.5% ABV. Australia is the first market for Stoneleigh Bright 2018 Pinot Gris and Rosé. Chief Winemaker Jamie Marfell explains that the methodology is not to reduce alcohol during production, but rather to start with earlier ripening grapes. He calls the lower ABV an added feature rather than a compromise.

Similarly, outside Marlborough, winemakers John and Brigid Forrest, both doctors, developed a low-alcohol line of wine, The Doctors’, now sold in Australia, Canada, the U.K., Germany, Thailand and Singapore. As with Stoneleigh, the methodology focuses on the vineyard, “by slowing the grape plant’s ability to make sugar but not its ability to make flavor.” And, striking an inclusive tone, their website notes: “We believe so strongly in the potential of lower alcohol wine, we’ve shared everything we’ve learned about the process with the New Zealand industry.”

When is a whiskey not a whiskey anymore? Perhaps this is a debate best undertaken over a glass of Whyte & Mackay Light, a self-dubbed “Spirit Drink” (21.5% ABV), launched this June in the United Kingdom after extensive consumer research. Coming from such an established brand, and whose recent history includes no fewer than five new releases in the domestic market for Jura in 2017, Whyte & Mackay Light should be a significant barometer of whether lower-alcohol sales will meet marketers’ hopes.

And what can agave do besides tequila and mezcal? You might be surprised by San Gabriel’s La Quiere de Oro line, offering four faux spirits based on fermented 100% Blue Weber agave; produced at 17%, 20% and 24% ABV, they mimic rum, gin, vodka and whiskey. Palatable and with palpable spirits-like character—at well-pour prices—the range gives beer-and-wine licensees an opportunity to add cocktails to their menus.

Inspired by the palpably increased popularity of alcohol-free beverages in Europe, Michael Yourison, CEO of Buonafide Foods, is introducing a line of totally alcohol-free Italian wines in the U.S. The alcohol is removed “through a reverse osmosis process,” Yourison explains. The wines are sourced in Italy’s highly regarded Alto Adige region, and have been described by Italy’s Top Sommelier from 2016, Maurizio Dante Filippi, as fresh and clean.

Fresh off introducing a new Provence Rosé at ProWein, Barton & Guestier (B&G) is extending their portfolio with a B&G Sparkling Blanc Alcohol Free wine. Not available until September, and then only in the UK, the B&G is made from 100% Muscat grapes and is said to offer pleasant floral notes with Muscat flavors.

According to Beverage Daily, no- and low-alcohol beers represents 8% of beer giant Anheuser-Busch InBev’s global volumes. That makes sense considering they have been making “light” beer since the 1970s. But that is just a start apparently: AB InBev is setting 20% as a goal to reach by 2025. And consider the significance of Heineken’s latest innovation: Heineken 0.0, an alcohol-free malt beverage with only 69 calories per bottle and with the brand’s iconic label turned blue to match the color associated with the alcohol-free category globally.

This May, Distill Ventures (DV)—the world’s first spirits accelerator, an independent company funded by Diageo—hosted a media event to discuss the state of Non-Alcohol as a beverage category. Embracing a lunch setting, Julia Momose curated a menu of non-alcoholic drink pairings. Momose is widely recognized for introducing the hospitality industry’s first-ever non-alcoholic cocktail pairing offering, which she created for Oriole in Chicago.

But the real story here: That luncheon coincided with release of a white paper, “Non-Alcoholic Drinks: A Growth Story.” DV launched their Non-Alcoholic division two years ago, when low alcohol demand as a trend was routinely shrugged off. Today, 25% of DV’s portfolio is comprised of Non-Alcoholic drinks—most notably Seedlip, the world’s first non-alcoholic spirit. Among their most salient findings:

Brooklyn’s first no-alcohol bar, Getaway, is hopping this summer, promising guests “a social experience without the alcohol.” Proprietor Sam Thonis, 31, personally is not a teetotaler; the concept was motivated by his brother, who had quit drinking and found it hard to find places to hang out. Getaway has risen to the challenge, utilizing varied milks, syrups, shrubs and fresh ingredients, plus a dash or two of humor. Consider “Daters Gonna Date” (Medjool date, peanut butter, lime, banana syrup, vanilla, macadamia nut milk, Coco Rico soda); and “A Trip to Ikea” (lingonberry, lemon, vanilla, cardamom, cream).

As visible trends go, rosé still reigns, but cans are starting to put on a show of their own—particularly with respect to spritzers, seltzers and sangrias. Treasury Wine Estates’ just-released Main & Vine Spritzers (Blood Orange Mango, Pink Grapefruit, Pomegranate) empitomize the way low-alcohol can be positioned as “better for you.” The slightly sweet mixtures of wine and natural flavors feature 95 calories per can, are gluten-free, and have just 5.5% ABV—all reinforced with a Nutritition Facts box on every can. Michelle Terry, Chief Marketing Officer, says Main & Vine Spritzers have been selling well in Australia, Scandanavia and the Far East. As for America, she believes the trend is arriving late but strong, “thanks to America being such a big market and the propensity of U.S. consumers to try new products.”9 Toehold in the big tent

Seedlip was not only ahead of the curve in their pursuit of zero-alcohol, but also in championing botanicals. And now, partnered with Williams Sonoma, Seedlip is getting mass-market exposure that must make their alcoholic peers green with envy. Available since May for $49.95, the gift set includes one 200ml bottle each of Seedlip Spice 94 (aromatic blend of all-spice, cardamom, citrus peel and two barks) and Seedlip Garden 108 (herbal blend of pea and hay distillates, rosemary, thyme, spearmint and hops). Ben Branson, who founded the brand in 2015, called the Williams Sonoma partnership “a real credit to my team and the movement towards offering proper grown-up options for when you’re not drinking alcohol.”

10 Getting In On the Action

“The rise in mindful drinking, along with health and wellness, is a trend that is here to stay,” according to Brandy Rand, President of IWSR, United States. The flip side of that trend is whether and how to get involved. IWSR’s research revealed a gap between supply and demand. While the IWSR reports that 52% of U.S. adults who drink alcohol are either trying now or have tried before to reduce their alcohol intake, “…at present, the low- and no-alcohol sector is poorly served, with few clear category leaders…in the U.K., for instance, low/no alcohol brands represent only 1.3% of the country’s total beverage alcohol market. In the U.S., that number is even smaller, at 0.5%.”

One direct way to fill that gap is on-premise, where mixologists are able to court low/no drinkers alongside their tippling peers. Breakthru Beverage, for example, one of the nation’s biggest distributors, recently posted on social media about “spirit-free” options: “Drinking is often a communal experience—a celebration, a toast, a bonding moment. A syrupy ‘mocktail’ or watered-down ‘virgin’ version of existing menu items can leave customers feeling excluded or called out, and they deserve better options.” The post included three spirit-free recipes by Breakthru Beverage Illinois Beverage Development Specialist Adam Halyckyj. No surprise: they look and sound delicious. Here’s one:

The Color of Royalty