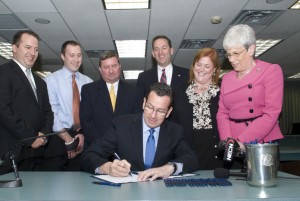 The task force met for the first time July 11 to begin looking at other possible changes to the state’s liquor laws, such as overhauling the state’s fixed pricing system for liquor that limits discounting by retailers. Their job is not an easy one: to come up with recommendations for the General Assembly to consider next year by Jan. 1, 2013.

Co-chair Rep. Kathy Tallarita
is the State Rep. (D) from the 58th District in Enfield. Now in her seventh term, she serves as Deputy Majority Leader. She was one of the first champions of the Sunday sales movement. She was appointed to the Task Force by House Speaker Chris Donovan.

Mark Abrahamson
co-owns Mo’s Wine and Spirits in Fairfield and Wilton Wine Shop in Wilton. He was appointed by the Senator Minority Leader John McKinney.

Chief James Cetran
of the Wethersfield Police Department was appointed to the Task Force by the Senate co-chair of the General Law committee, Sen. Paul Doyle.

Brian Durand
works for the Office of Policy Management and is one of the Governor Malloy’s designees. He helped draft Malloy’s original liquor reform proposal.

David Leon
of Simbury is the owner of Super Cellar Warehouse Liquors in Avon. He has been in retail for 25 years and previously worked for a major wine distributor. He was appointed by Senate Ranking Member of the General Law Committee the Sen. Kevin Witkos.

Rep. Sandy Nafis
has served as State Representative (D) to the 27th Assembly District, Newington, since 1998.

William Rubenstein
is the Commissioner of the Department of Consumer Protection, a post he served since Feb. 9, 2011, when he was nominated by Malloy. He served in the Antitrust and Consumer Protection units of the Office of the Attorney General from 1986 through 1997.

Kevin B. Sullivan
is the Commissioner of the Department of Revenue Services.

Dr. Ian Ayres
is a lawyer and an economist. He is the William K. Townsend Professor of Law at Yale Law School and a Professor at Yale’s School of Management. He is the editor of the Journal of Law, Economics and Organization. Ayres clerked for the Honorable James K. Logan of the Tenth Circuit Court of Appeals.

Edward Crowley
is the President and Chief Operating Office of Dichello Distributors in Orange. He has been in the distributing business for more than 36 years. He was appointed by the Senate Majority Leader, Sen. Martin Looney.

Rep. Mary Fritz
represents the 90th District (D). She was appointed to the task force by Rep. Sharkey.

Dr. Stanley McMillen
is a former managing economist at the Department of Economic and Community development and presently an economics professor at Trinity College and the University of Connecticut. McMillen worked with Malloy to review the economic impact of this 2012 liquor law proposal, and is one of Malloy’s designees to the Task Force.

David Rutigliano
is the Chair of the Connecticut Restaurant Associations Legislative and Government Relations. He owns five restaurants in southern Connecticut.

Staff who will assist the task force: Rich Hanratty, LCO attorney; Duke Chen, OLR Researcher; fiscal analysts Alan Shepart, Evelyn Arnold, and Chris Wetzel from OFA. The task force is also being assisted by James Demetriades, a legislative intern with Sen. Doyle’s office. Steve Palmer is the clerk of the General Law Committee, and will be staffing the task force.