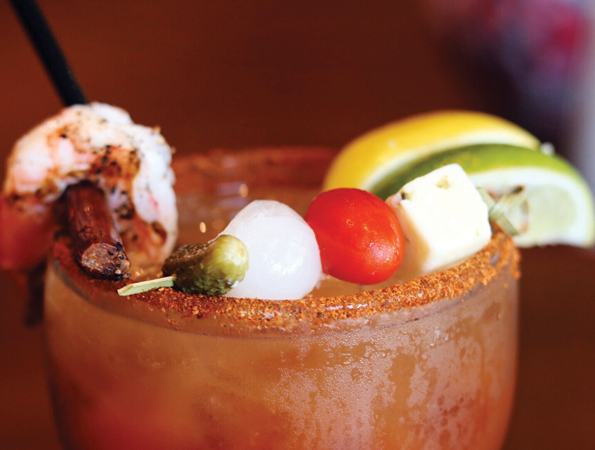 Led by the Famous & Flexible ‘Mary’, Savory Cocktails are Here to Stay 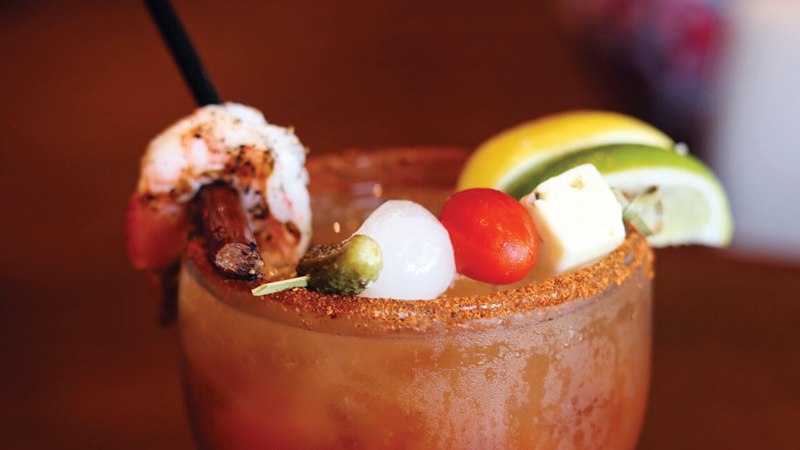 The Churchill Bloody Mary at Howells & Hood in Chicago comes in a 20-oz goblet.

There’s no lack of savory in cocktailing. Gin’s tang of juniper, vermouth’s herbal zip, Sherry’s nutty astringency—all were important to many original cocktail whistle wetters. Vermouth and gin together gave us the sublime Martini, the drink’s crisp pungency the pure definition of savory.

But today, it’s the Bloody family—the Mary, the Caesar (made with clam broth) and the Bull (made with beef broth)—that are the mainstays on the savory menu, based largely on their ubiquitous brunch appeal. Lately though, bartenders with a culinary flair have introduced new sorts of savory into their flavor tool kit, broadening the trend both geographically and creatively.

The Midwest has long been known as the unchallenged headquarters of groaning board Bloody Mary bars incorporating schooners of mixes, dozens of garnishes and enough appetizer add-ons to justify a big ticket. Said to be home of the world’s largest Bloody Mary bar is the Silver Grill Café in Fort Collins, CO, where 50 or so items including quail eggs and pickled cactus leaves are on display.

While not many operators take on this accessorized format, others seize opportunity to focus on Bloody presentation. Howells & Hood in Chicago serves the Churchill Bloody Mary in a 20-ounce goblet crowned with a skewer of pepper jack, grilled shrimp, cornichon, cherry tomato, cocktail onion and a Slim Jim, plus an Old Bay-seasoned rim. At Stoic & Genuine in Denver, an Alaskan crab leg is an $11 upgrade to their $10 “Best Bloody Mary,” which already comes with mini bottle of Tabasco, pickle ribbons, skewered lemon and lime wedges and two green olives.

Riffs on the build-your-own motif are showing up as well. The Halifax at the W Hotel in Hoboken, NJ, recently launched a weekend brunch affair called “It’s About Bloody Time” with a DIY check-off menu that starts with a list of eight spirits and beers, two mixes, seven spices and sauces, plus 20 accessories including oysters, shrimp, bacon, salami-wrapped mozzarella, cornichons, pickled carrots and more. 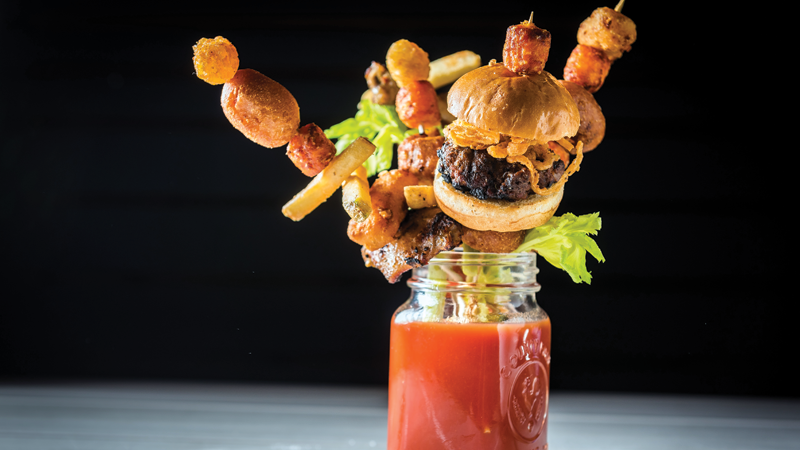 The $20 “The Breakfast of Shaw” at HalfSmoke in Washington, DC, basically comes with a meal as garnish.

Elsewhere the Bloody is being rethought. At Cole’s in Los Angeles, Max Seaman just revamped theirs starting with quality tomatoes. “One of our goals was to get as much umami as possible, while moderating the sodium levels,” says Seaman. “We took a look at classic Worcestershire sauce and decided to “deconstruct” it by including many of its ingredients: anchovies, tamarind paste, garlic flakes, onion powder, miso paste and malt vinegar.” The drink is garnished with a chile-salt rim, celery stalk, pepper jack cheese, pickled egg, cucumber, carrot and green bean.

A more subtle savory version can be found at LA’s Roku, where Charity Johnson created the Shochu Tomato. “It’s the epitome of a savory cocktail,” she says. “I always wanted to love Bloody Marys but they were too heavy for me. People can be a little afraid to try it at first but it is so simple and light.” In her version, fresh cherry tomatoes are muddled with basil leaves, and shaken with shochu, lemon juice and simple syrup.

Tomatoes are already umami-rich but other savory ingredients are showing up lately. Tara Heffernon of Duke’s in Healdburg, CA, created a Pimm’s Cup variant using dried shiitake tea, shiitake tincture and yuzu oil; the drink’s popularity pushed it onto the regular menu.

“Here we all tend to gravitate toward things that have an element of savory even if it isn’t strictly a savory cocktail, using a lot of savory ingredients to create something more harmonious,” she says. “For the fall into winter menu we all picked things like butternut squash, beets, mushrooms, salted cherry blossom, turmeric, all with a savory quality.”

Does the Bloody Mary possess some special quality that has enabled it to evolve so dramatically? The iconic cocktail has had the honor of being analyzed by the American Chemical Society (ACS). Presenting a paper in 2011 at the 241st National Meeting & Exposition of the ACS, Neil C. Da Costa, Ph.D., declared the Bloody Mary “the world’s most complex cocktail,” explaining: “[F]rom the standpoint of flavor chemistry, you’ve got a blend of hundreds of flavor compounds that act on the taste senses. It covers almost the entire range of human taste sensations—sweet, salty, sour and umami or savory—but not bitter.”

Indeed, when sugar is left out of a drink’s spotlight, the flavor combinations expand quite easily. A drink at Le Petite Paris in Los Angeles exemplifies how little tweaks can highlight a savory quality. Le Balsamique dashes balsamic vinegar into a mix of vodka, strawberries and lemon juice. And at Academia, just opened in Austin, Texas, the opening menu featured the Raw Dill (Linie Aquavit, Dolin Blanc Vermouth, St.-Germain, saline, dill, salmon roe).

Charity Johnson, who oversees cocktails for Innovative Dining Group’s various units of Roku, Sushi Roku and Boa Steakhouse employs such savories as macha and oolong teas, shishito peppers and sage. “Most of my cocktails will have an earthy or vegetal element to them,” she says. So many cocktails today lean toward citrus and sweet with perhaps some bitter, she says, but salty and savory can shift a drink’s flavors notably.

Bar Manager and partner Tim Wiggins at Retreat Gastropub in St. Louis agrees. “The depth and different layers that savoriness can create, even a tiny pinch of kosher salt or pepper or coriander can really brighten a drink.” Coriander, sage, charred rosemary, carrot juice—even pumpernickel-infused Mt. Gay Rum—make their way onto his drink menu.

With numerous vermouths, tangy aperitifs and ingredients including caraway, chamomile, turmeric and shiso brandy in the mise en place, Heffernon and co. at Duke’s are firmly in the savory camp. “Ninety percent of cocktails could use a little harmonizing through savory,” she says, adding that demand is growing stronger. “We get so many requests about savory—customers want something flavorful but not too sweet and get excited because it hasn’t been done that much, and they love to have something connected to food.”