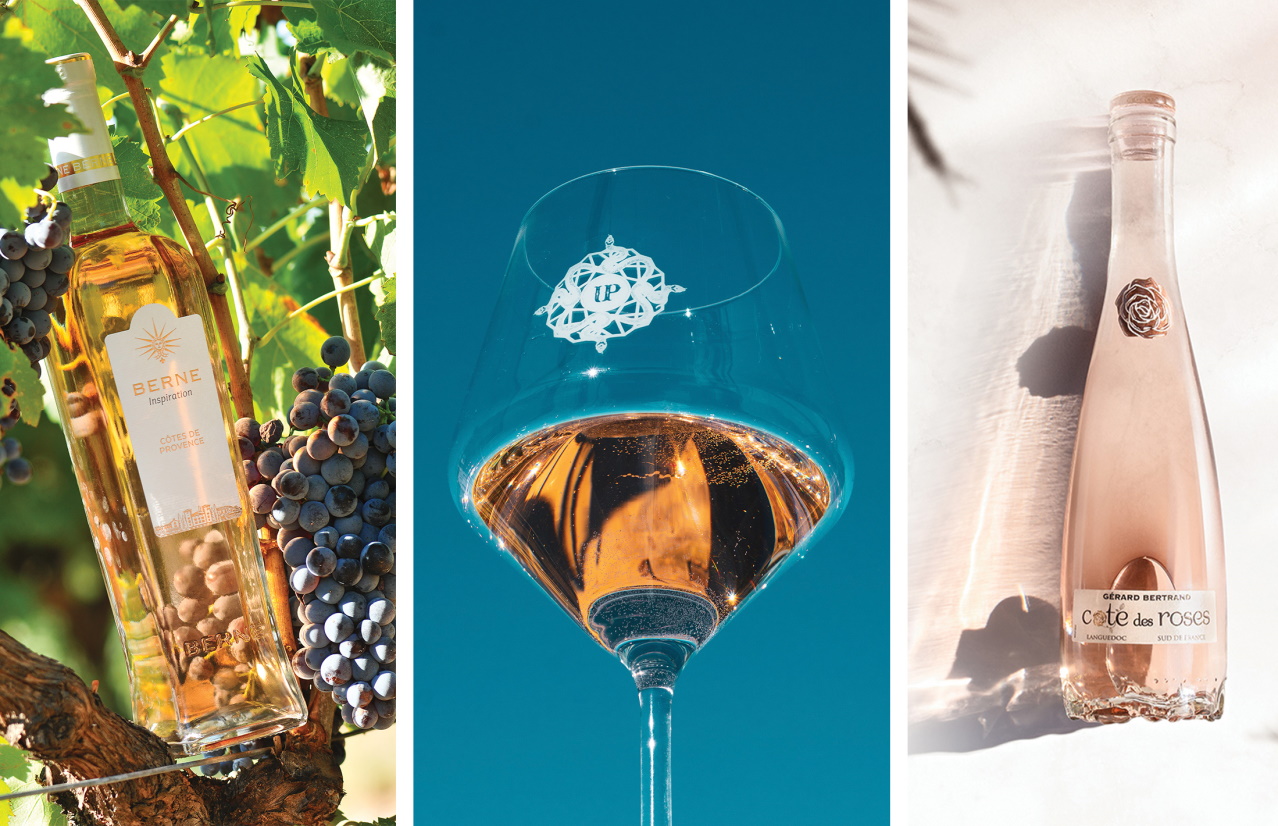 The rosé category remains strong, but an influx of generic brands and the lingering impact of 2020 means it’s more crowded than ever. Will quality prevail?

It’s no secret that the rosé category has boomed over the past decade. According to the IWSR, still rosé wine sales volume in the U.S. has grown by 118 percent from 2015 to 2020, while still wine overall only grew 1.5 percent over the same time period.

But according to Silicon Valley Bank’s State of the Industry 2021 report, the category’s growth rate sat just below zero—a sign that the rosé market is maturing. What does that mean for the sea of pink-hued wines fighting for  attention?

“When a category grows, naturally, many people want to jump in and take a slice,” says Anthony Cohen, a southern France native and brand director for Vintus, which represents well-known Provence producer Château Minuty. “They may experience high sales at first as the new product, but as the category matures, the producers that have defined it and have been the essence of it, will ultimately lead it. They have the staying power.”

“Every winery is producing rosé now,” says Jon McDaniel, the Chicago-based founder and CEO of Second City Soil. “Most are doing so for economic reasons, because they think the market will buy—which is never a sustained strategy.”

Having survived the challenges of 2020, importers, retailers, and producers are gearing up for a strong 2021 rosé season. But even though the on-premise has reopened for business, how will a category on the brink of oversaturation fare?

Provence remains the quality leader for rosé, setting the category standard with its dry, pale pink wines. (The latest release from Provence rosé pioneer Sacha Lichine of Château d’Esclans is simply dubbed “The Pale.”) As such, it remains the rosé to emulate—particularly in color.

Elizabeth Gabay, MW, the author of “Rosé: Understanding the Pink Wine Revolution,” reports that in recent years, the Centre du Rosé in southern France saw a nearly 40 percent increase in paler rosé styles among the wines submitted to the organization for research.

“Provence is the undisputed north star of rosé. It’s what everyone has mimicked, and it’s easy to understand why,” says winemaker Charles Bieler of Bieler Père et Fils, Charles & Charles, and Bandit.

That is certainly true in the U.S. market, where consumers often judge rosés on color more than anything else. “Our clients continue to look for rosé primarily from Provence—specifically Bandol,” says Craig Maske, general manager and partner of Sherlock’s Wine Merchant in Atlanta.

On one hand, this has allowed rosés from around the globe—even obscure regions—to make inroads in the U.S. market, where style matters more than provenance, report many buyers. “The wines that have the more Provençal style, regardless of region, sell the most,” says Sandra Spalding, director of marketing for Austin-based Twin Liquors. ”Fresh, crisp, and light is the trend, whether it’s from Spain, Savoie, Rhône, Corsica, or Lebanon.”

Regions are changing traditions in order to compete: Provence’s massive rosé following has even begun to impact other traditional rosé-producing regions; in Rioja, for example, producers petitioned the Consejo Regulador to allow for the production of lighter rosés under DO regulation in 2018. “Quite often, the darker, traditional style is what the local Spanish market prefers, and the paler wines are being exported,” says Gabay.

But it has also resulted in an influx of rosés looking to succeed on color, category success, and branding, from celebrity-backed bottles like Hampton Water (from Jon Bon Jovi) and Vanderpump Rosé (from Lisa Vandepump, of Real Housewives fame), to lifestyle brands like Yes Way Rosé and White Girl Rosé, and and even wellness brands.

“About 90 percent of the rosé being made today is to a formula,” says Gabay. “I’ve asked different producers who are new to the market, and most of them answer that they look to what Provence producers are doing because that’s what the consumer wants.”  Adds Bieler, “There are many that are just jumping on the trend but don’t add much to the conversation.”

The concern with the sea of Provençal knock-offs is that while these rosés may all look the same, they don’t taste the same—both in style and quality. “It just creates further confusion, as some of these new wines are the same color but much higher in sweetness and not as balanced,” says McDaniel, who consults as an educator with Provençal producer Château de Berne. “I believe this will bring the customer to the thought that just because it looks like Provence, doesn’t mean it is, so they will continue buying the classics.”

As more rosés have flooded into the U.S., sales are more competitive. “I see our distributors getting more strategic in how they take rosés on,” says Mark Raymond, the national sales manager for Carolina Wine Bands in Wethersfield, Connecticut. Though they will take on a handful of rosés from different regions, they won’t take on dozens of rosé SKUs anymore.

As a retailer, Maske makes shrewd decisions not to overstock too many labels as well. “You have to strike a balance between a good selection and not muddying the water with too many,” says Maske. “You don’t want to have a massive closeout [sale] at the end of the season.”

Fortunately for Atlanta, Austin, and other warm-climate markets, rosé is generally sold year-round with only a slight lag in the winter months, a factor that helps inventory sell-through. But in colder markets, there is a definite seasonality to rosé sales—though perhaps not as much as there once was. Erin Drain, the Chicago-based head of marketing for Olé & Obrigado, notes that the portfolio purposely carries their Liquid Geography rosé as a year-round rosé SKU.

“There is a lot of competition for shelf space and by-the-glass placement, but with increasing demand for rosé year after year, the quality selections all seem to find a home before their next vintage arrives,” says Jack Mason, MS, the Texas state portfolio manager with Republic National Distributing Company (RNDC).

This is perhaps where the category will mature with time—the distinction between Provençal-style rosé and quality Provençal-style rosé. “I think we will see four phases of rosé appreciation among consumers,” says Vintus’ Cohen. “People ask for a glass of rosé at first. Then, they start to ask for a rosé from a specific place. Then, they will ask for a glass of Provence rosé. Then for a specific brand like Château Minuty.”

At this point, the U.S. is somewhere between Cohen’s third and fourth phase, and as their rosé tastes become more discerning, so will their buying choices. “Consumers’ palates are becoming more sophisticated, and they’re looking for quality,” says Languedoc-Roussillon producer Gérard Bertrand.

It’s the established Provençal (and Provence-adjacent) brands such as Château Minuty, Château d’Esclans, Château de Berne, Gérard Bertrand, and Chêne Bleu that have continued to hold their position both on-premise and off-premise even with an influx of new brands to the market. Even expensive rosés from well-known producers—like Château d’Esclans’ Garrus, Domaine Tempier, Domaines Ott, and Gérard Bertrand’s Clos du Temple—have a following in the U.S. market.

“High profile winemakers such as Sacha Lichine of Château D’Esclans helped catapult ‘designer rosés’ onto the world stage, which has helped small wineries like ours,” says Nicole Rolet, the principal of Chêne Bleu. “I personally believe that cream rises to the top, and wines that are made with no shortcuts, serious craftsmanship, thoughtful intent, and respect for the environment will outlive fads and continue to be relevant for years to come.”

For now, there’s still room in the rosé category to accommodate a range of rosé SKUs. “The bubble will eventually burst on the celebrity rosé, the same way that it did with celebrity vodka,” says McDaniel. “We are starting to see a shift away already.”

“I do think we’ve hit a saturation at lower price points,” says Drain, who has seen more interest for the portfolio’s higher-priced wines over the past three years. “The consumer is going to get bored, and that’s where some brands may go away.”

The mounting oversaturation of the rosé category was compounded by the twin challenges of tariffs and COVID. “COVID, unusual weather events, and fires led to delays and lags in production and shipping, and we have seen the price of everyday wine increase due to tariffs,” says Colin Groom, Twin Liquors’ wine director.

Though 2020 dealt a hard blow to many in the wine industry, it didn’t help that the on-premise shutdown occurred just as the 2019 rosés were landing on the market. Losing restaurant and bar sales initially resulted in a backlog for producers who typically focus their efforts here. While larger, more established producers were could transition sales to off-premise and ecommerce, smaller wineries with on-premise footholds had a harder time.

From the importing side, Bob Gaudreau, the CEO for MDCV Global Americas, witnessed the larger brands maintain strong sales. “Brands like Whispering Angel, Côte de Rosé, and Miraval shipped more and grew quite well due to their brand presence,” he says. “They benefited from all of the click-and-collect purchases from the off-premise channel last year.”

Tariffs only made this more challenging, says Ian Downey, the executive vice president of Winebow, who said that producers and importers were forced to either hold pricing or lose sales. “Well-known producers and brands, as well as those who fought to absorb the tariffs for as long as possible, fared better,” he says.

MDCV, a collection of four rosé producers in Provence including Château de Berne, Château des Bertrands, Château Saint-Roux, and Ultimate Provence, is one of many companies that absorbed the cost of tariffs and held their pricing.

“We had to start with the consumer,” says Gaudreau. “The last thing I wanted to do was get above a certain price point to make our brands inaccessible to buyers.”

Downey predicts skipped vintages, for example: “Producers with vintage backup may skip a vintage or short a vintage to the U.S. in order to ease that backlog and correct the inventory levels,” he says.

Though the IWSR’s 2020 data has not been finalized, forecasts indicate that still rosé wine posted volume growth last year, while the overall wine category was down.

Additionally, 2021 has offered some respite with a temporary lift on tariffs giving producers and importers a much-needed financial break as well as the ability to get wine shipments moving again.

“Tariffs have been suspended just in time for the spring rosé releases from France and Spain. The timing is perfect as more and more restaurants are opening,” says Downey. “There are still quite a few 2019 deals to be had as they clear the path for the ’20s, which will not have tariffs.”

However, predicting the future for rosé remains fuzzy despite optimism from U.S. industry leaders, particularly now that even more producers are fighting for shelf space in an already crowded off-premise market.

The IWSR forecasts 70 percent growth for rosé sales in the U.S. from 2020 to 2024. But as the quality and premiumization drive the category forward, not all rosé brands will survive.

“Wineries that [have historically] focused on rosé will be the ones that will outlast,” says McDaniel. “But fewer producers will make rosé in 5 to 10 years. Those wineries that just jumped on the bandwagon will be shifting their resources to making wine spritzers—or whatever the next fad is.”