Beer Column: The Romance of Ale

The first beer was an ale. Who knew what blew into that stew of water and grain at the dawn of drink? Perhaps it was a yeast that we have forgotten, or that has mutated, or possibly is still around working its magic. Whatever it was, it’s more than likely that it produced the ale that changed the world. 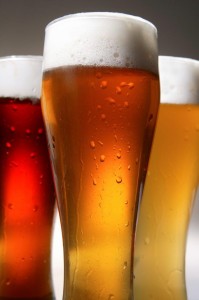 When I was a kid my uncles drank beer, which was lager, though nobody called it that. Every once in a while I’d hear a radio ad during a baseball game for Ballantine Ale. “Ale,” I thought, “seems a lot more interesting than lager beer.” They drank ale at the inns in Middle Earth, in Old England, in the dangerous taverns of Lankhmar, on cold Gethen. In my imagination, ale had a rakish pedigree, the spirit of risk and proud laughter. Make mine an ale.

Ale, as it turns out, has a far more interesting past than lager, which has been with us for less than 200 years. Ale is easier to brew at home, which is where brewing took place for most of human existence.

The number of different types of ales is surprising, and many beer drinkers are astonished to learn that stouts are ales and porters are ales. Most beers brewed in Belgium are ales. Indeed, most beers brewed in the United States are ales. Boston Brewing, for example, features 64 Samuel Adams beers on its website; of those, about 45 are ales.

Talking about ale to retail customers with little beer knowledge presents a fascinating challenge. One can point out the differences between the brewing of lager and ale, making mention of the different types of yeast, the fermentation temperatures, the length of aging, and so forth.

To go down that road might cause the customer’s eyes to glaze over – after all, do they really need to know that? This is when you, the retailer, must employ your razor-sharp perception and decide what kind of story to tell about ale.

A couple of decades ago, as the American craft beer business was cementing its place in the beverage pantheon, I listened to Jim Koch give the best description of ale I had ever heard. Koch, founder of Boston Beer, said something like this: “Ales are livelier and more complex than lagers. They have fruity esters that are apparent to the nose and the palate, and tend to be more full-bodied than lagers. Lagers are more restrained, more conservative in both aroma and flavor.”

Thanks, Jim. That says it all, and that’s often the only thing that the customer wants or needs to know that day. Of course, if the customer has dabbled in home brewing, you’ll figure that out quickly and shift into talk of fermentation, original gravity and hop characteristics.

Many resources will mention that ale tends to be higher in alcohol content than lager. That could not be farther from the truth. Certainly the higher strength beers are ales, due to the capabilities of ale yeast, but it’s easy to find ales that are lower in strength than lagers.

When people say that Guinness Stout (an ale) is a heavy beer, “and I don’t like heavy beers,” you can respond with this: Guinness Draught is lower in alcohol than Budweiser (4.2% vs. 5%), lower in calories than Budweiser (125 vs. 145 in a 12-ounce serving), and lighter in weight than Budweiser. Heavy? Not a chance. The illusion of heaviness comes from the flavor of the roasted barley.

How the heck, you well might ask, can a black beer and a blonde beer both be ales? You might ask the same question about lager. Keystone Light and Guinness Black Lager are in the same family of beers. Beer color is determined mainly by the barley, which is heated in a kiln prior to brewing. The longer it roasts, the darker it gets, and its color influences the beer. The water, the fermentation process and the yeast all can have some influence on beer color, but only slight.

Flavor is created and affected by every ingredient and step in the brewing process, but the roasting of the barley malt is one of the major influences. The only way to gain a useful knowledge of ales is to taste them and study them.

A good place to start is with a respected website, and I’m going to recommend that you spend some time at Beer Advocate, in their Beer 101 section (beeradvocate.com/beer/101/).

Jack Kenny has been writing The Beer Column for the Connecticut Beverage Journal since 1995. Write to him at thebeercolumn@gmail.com.