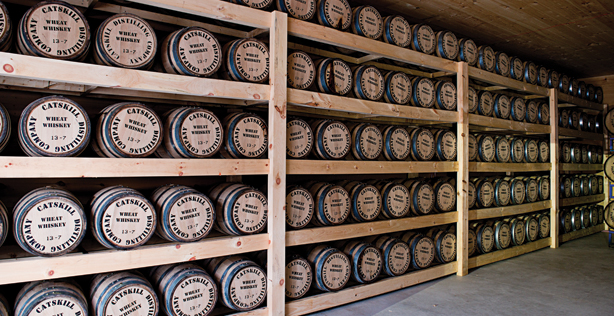 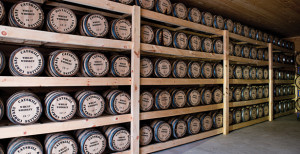 Producers have been tinkering with the spirits-aging process for about as long as distilled liquids have been stored in barrels. Techniques that have endured include using smaller barrels (which increase the amount of contact between the liquid and the wood); creating a solera (adding new spirit to already-aging product); and using wood chips or staves for oak “flavoring.”

Lately, the tinkering has aspired to an even more dramatic level, bolstered by new technologies. At the Catskill Distilling Company in Bethel, NY, proprietor Dr. Monte Sachs uses a technique he calls “accelerated aging” he learned from the late Lincoln Henderson (Brown-Forman, Angel’s Envy). Four specially designed, heat-cycled warehouses emulate seasonal heating and cooling, but at a faster rate.

Sachs says the design was Henderson’s but hadn’t been put into action. Heating and cooling allows raw spirit to seep in and out of the barrels, collecting esters and flavoring from the wood. Sachs says two years in his rickhouses creates a spirit that tastes five or six years old, ideal for bourbon-style whiskies. Reflecting the new-tech, indie spirit, Catskill Distilling labels feature names like Defiant Rye and Fearless Wheat Whiskey.

While Catskill Distilling’s approach can be rationalized as a means of mimicking nature in order to exert more control over the post-distillation aging, Bryan Davis’s approach at Lost Spirits in Monterey, CA, is more extreme. Davis, who previously worked with the Spanish-based absinthe brand Obsello, first got his idea by wanting to be different. “With 400 distillers, no one needed another vodka, gin or white rum,” he recalls. And he targeted aging because he believed that the math for aging whiskey didn’t make sense. It was time to accelerate the process.

“Whiskey is a solution to over 600 things,” Davis says. “There were a lot of missing links in the research on precisely how a spirit ages in the barrel.” He honed in on the dual aging processes of extraction—physically pulling flavors from the wood into the spirit—and esterization, the chemical conversion of fatty amino acids into the organic compounds that add fruit and oily notes.

His research led him to a new technology—dubbed the THEA One reactor, a sort of Hadron supercollider that bombards a raw spirit with all the component chemicals and reactions that are expected to occur by the end of the aging process. It’s more like taking a shortcut, as opposed to accelerating the aging process.

For each base spirit and for each desired result, it takes Davis several weeks of tweaking to get the desired profile. He made a splash last year by announcing he could make a whiskey or rum in six days that looked, smelled and tasted as if it had aged for 20 years. (An interesting quirk: Davis points out that he produces a finished product, i.e. a 20-year “aged” spirit. Yet, he can’t yet make 10-year and 15-year expressions of the same juice.)

The goal now at Lost Spirits is to partner with other distillers making great raw product. So far, the company has two “beta testers,” as Davis calls them: Santeria Rum, and an upcoming Rattleback Rye.

Davis isn’t the only explorer in the world of rapid aging. Tom Lix of start-up Cleveland Whiskey introduced a process wherein whiskey produced in Kentucky and Indiana is aged for a few weeks in new oak (as per the bourbon rules), then shipped to his facility in Ohio. The whiskey is “finished” through a pressure-aging system where staves of black cherry, honey locust, hickory and other non-conventional woods are placed with the whiskey inside pressurized steel containers which force the spirit in and out of the staves for additional coloring, flavoring and chemical interaction. This step takes about 24 hours.

Lix points out that his company isn’t simply providing a high-tech, fast product: “That’s not necessarily a consumer benefit. Our focus is, what can we use this technology for that hasn’t been possible before?” Hence the exotic wood finishes. “You couldn’t make a barrel out of black cherry, because it would leak like a sieve,” says Lix.

One reason writers and bartenders have been receptive to the concept of rapid aging is a sense of transparency regarding technology and intent. Lost Spirits and its partner distilleries, for example, make no attempt to hide the technology (as is sometimes done with sourced or flavored products).

Another plue: rational price points for the finished products. Santeria Rum is about $35 SRP; Rattleback Rye is $45. Rattleback just launched at Tales of the Cocktail in July. Made at Lost Spirits’ new lab/distillery in Charleston, the 61% undiluted (122 proof), matured with Sherry-seasoned, tannin-stripped new American oak. By contrast, some start-up distillers jump into the market by sourcing already-aged whisky or rum, putting their label on it and charging $75 or $100, in part to keep up appearances and in part to pay back hungry investors. “The pricing doesn’t have to be inflated,” says Davis. “That would take all the fun
out of it.”

In general, the consensus is that the disruptive technology doesn’t capture all of the nuances, flavors and general wherewithal of whiskey that sits in a rickhouse for five, 10 or 20 years. But for a world increasingly thirsty for brown spirits, it seems to be an acceptably fine way to get more decent product to the shelves. And given the relative pricing and degree of transparency—coupled with continuing demand for mature spirits—speed-aged spirits are likely to proliferate.