Everyone loves a good tropical drink—be it at a tiki bar, on a Caribbean cruise or at some island resort. Sweet and cold, yet refreshing. The real star of this lush liquid genre, is rum. Though it comes in many iterations, all rum can be traced back to sugarcane—so abundant in island climates. The song that island-hopping pirates sing isn’t “Yo-ho-ho and a bottle of gin,” after all.

Perhaps befitting its relative lack of regulation, rum has long been a renegade spirit, from pirates of yore to rum-runners of Prohibition. Whether on high seas or through back doors, rum has remained an American favorite in many forms and formats. A sense of adventure is still palpable in many brands, by tattoo or barrel or cane or pirate map. From a simple base of sugar, a many-splendored spirit has evolved.

The short answer: everywhere. The general term, “rum” isn’t country-specific or a protected appellation. Just about any region or country with a spirits industry produces some variation on rum. However, the undisputed center remains in and around the Caribbean. Unfortunately, like anything rooted in the colonial era of the region, its origins are tied to the slave trade.

What’s It Made From

Rums range from clear to dark and their depth of color often is region-specific (and not always natural). Spanish-speaking countries produce most of the lighter rums, while English-speaking tropical islands and territories are known as the source of most of the darker ones. As with whiskey and tequila, the length of the maturation period plays a key role in rum’s flavor. 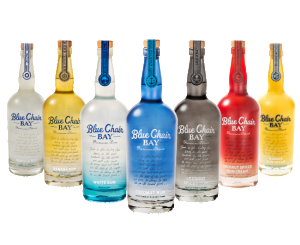 Smooth and rich, rum creams (technically liqueurs) are another important branch of the rum tree, first emerging in the early 1980s and built on the success of whiskey cream cordials. With a lower proof and infused with natural flavor and a smack of sweetness, these creamy rum-based spirits work brilliantly in tropical cocktails.

The tropical tilt is a particular strength for Blue Chair Bay, the line of rums developed by multi-platinum singer-songwriter Kenny Chesney. The brand’s island image is well tailored to Chesney’s “No Shoes Nation” fan base. Blue Chair offers seven rums, but the two cream expressions have been especially popular.

While technically part of the rum family, cachaça was officially recognized by the United States as a distinctive product of Brazil in 2013. Like rhum agricole, producers ferment pure cane juice,rather than sugarcane by-products, and then distill the fermented liquid. Cachaça benefits a great deal from the unique terroir of its home country. When cachaça is distilled close to a rainforest, it often picks up the flavors of the surrounding flora, including bananas.

What Are The Latest Rum Trends?

Rum’s pirate identity goes back centuries. Robert Louis Stevenson’sTreasure Island,published in 1883, includes the pirate song “Fifteen Men on the Dead Man’s Chest,” with the iconic line “Yo ho ho and a bottle of rum.”

While rum in general is associated with the tropics, spiced rum in particular has come to be associated with adventures on the high seas, including the tattoo culture embraced by sailors. One sailor in particular, Norman Collins, pioneered techniques that literally transformed tattooing into an artform. Known as “Sailor Jerry,” his impact on the tattoo culture in the 20th century is now rivaled by the impact of his namesake rum on the spiced rum subcategory.

The richness of natural spices in Sailor Jerry Spiced Rum means it can be sipped on its own or easily mixed. In this “High Honor” cocktail, which celebrates Sailor Jerry’s service in the U.S. Navy, the rum base supports a combo of sweet tea, blueberries and citrus.

Combine over ice in a shaker and shake vigorously; double strain over ice into signature Sailor Jerry Oil Can and top with a splash of lemon-lime soda. Garnish with a strawberry.

There are hundreds of tiki drinks and many of those are proprietary creations at their respective bars. As a genre, tiki drinks are known for both exotic (and often multiple) ingredients and painstaking preparation steps. Some of the more universal classics include:

Born in Barbados in 1983, Malibu includes the flavor of coconut, a taste profile that has resonated with rum drinkers the world over.

Malibu’s ability to extend into diverse directions speaks to the power of flavor in the rum category overall. In fact, Malibu represents 48% of the flavored rum category.* Line extensions include:

Fill a chilled highball glass with ice cubes. Add Malibu and top up with pineapple juice. Garnish with a pineapple wedge.