Beer Column: The Joy of Pilsner

Where and when the first beer was made is an event lost to us. Deep thinkers can’t even agree on how many millennia ago it was that a human first sipped the ancestor of beer. Fortunately for us, we do have a much better idea about other milestones in the catalog of all things beer. One of those is the creation of pilsner, the world’s most successful beer style. Pilsner had a birthday last month: It was born on November 11, 1842, in the Bohemian city of Plzen.

Pilsner, or pils, is a very blond, brilliantly clear and moderately effervescent lager that carries a pronounced hop flavor. Many of the widely popular commercial lagers today model themselves on this style, but most often they lack the signature hop character and are brewed with adjuncts – corn and rice – along with the barley, because those starch substitutes are far cheaper.

Most people consider pilsner to be a German style of beer, and in many respects it is; but its origin is in Bohemia, what is now the western part of the Czech Republic. The Bohemians and the Bavarians have always had a cultural rivalry, but they also have similar tastes, and the pilsner style that emerged in the mid-19th century reflects that sharing of taste. It so happens that Bohemia then belonged to the German speaking Austro-Hungarian Empire, where it remained until the end of World War I.

It started with a great dislike. The beers in Plzen at the time were top-fermented ales, but local brewers were having such quality issues that the people loudly disapproved, and on one occasion the city council ordered that 36 casks of the beer be dumped in public. Recurring dissatisfaction caused the burghers (citizens) to band together and decide to create their own brewery – Burgher Brewery – and create a beer in the Bavarian lager style, which was held in high regard. And to make the new beer they hired a Bavarian brewmaster, Josef Groll, to come to their city to work his magic.

Not only did Groll succeed in producing a well-liked beer, he changed the direction of beer forever. Beer in Germany, Bohemia and elsewhere in Europe at that time was dark. Brewers toasted and roasted the barley to a degree that resulted in a brown or a black beer. We think of German lagers as always having been pale in color, but such was not the case. The German Beer Purity Law of 1516 was made for brown beers.

Josef Groll, however, had a different idea. 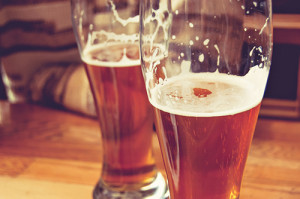 He kilned his barley ever so slowly and carefully to retain the golden color of the grains, yet still dry it to the proper degree. It had never been done before, but such was Groll’s skill. He hopped it with local hops from the Saaz region of Bohemia (still highly prized), and on that November day he unveiled the finished product.

The city went wild. The Germans went wild as well and began working their own magic with the style. Pilsner took off in the north of Germany, where the water is hard, which yielded a much hoppier version. In Bavaria, and more so in Bohemia, the water is softer, which results in the delicate character for which pilsner is prized.

It wasn’t long before drinking a pilsner in a Paris salon was the height of chic. The popularity of the style spread throughout Europe, with the exception of England and Ireland, and the rest is history. German emigrants to the United States brought the style with them, especially to the Midwestern region, thus giving rise to the major brewing centers of Milwaukee, Cincinnati and St. Louis.

A few of other significant milestones in beer took place in Europe around the time of Groll’s great achievement. Louis Pasteur discovered that yeast is a single-cell plant in 1841, a find that led to isolation of valuable yeast strains and the capability of achieving uniformity of style on a regular basis.

Commercial glass containers became available at a price within reach of the common man, meaning that the newly-available beautiful pale gold lager could be seen in all its glory, rather than poured from the tap into an opaque vessel. Finally, the miracle of refrigeration was developed. This meant tight control of lagering temperatures, significant improvement in quality control of beer, and a guarantee that the beer drinker could always find a cold pilsner nearby.