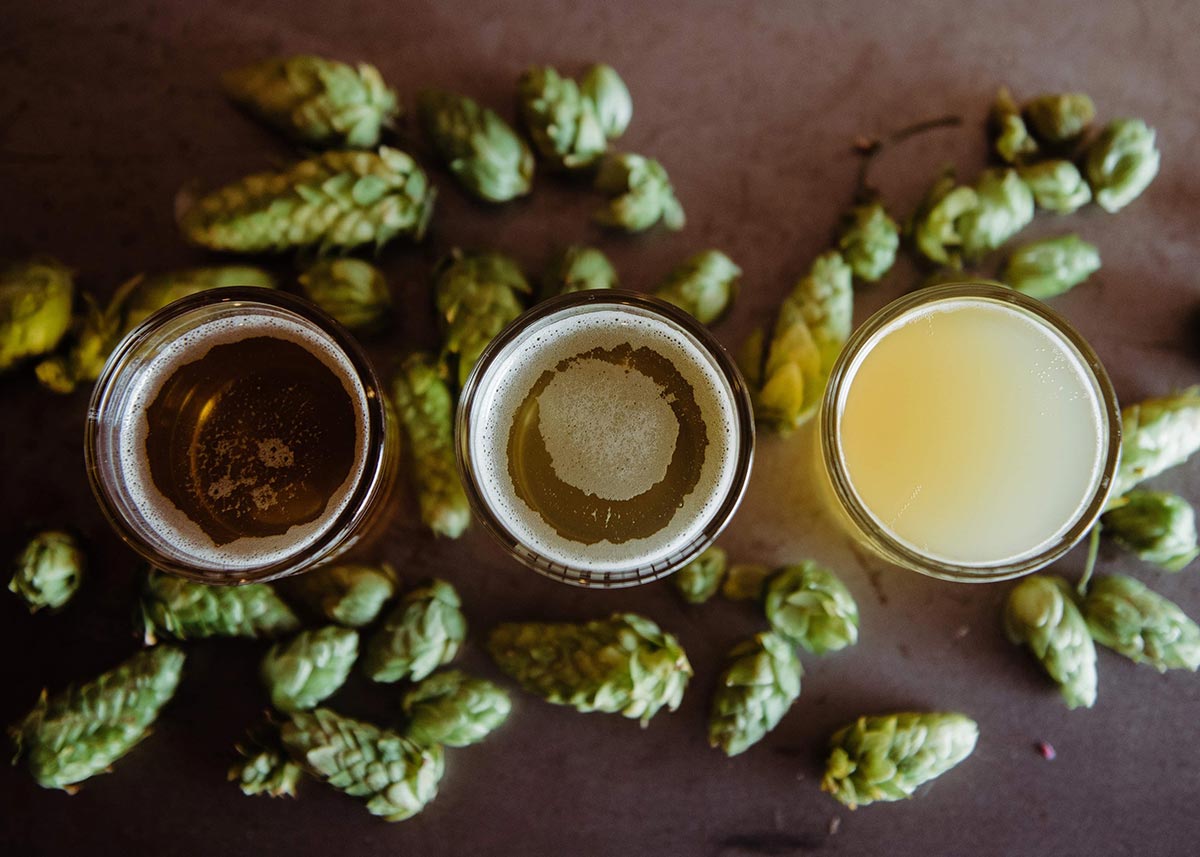 A large aspect of today’s beer experience is defined by hops. To many, hop performance is the most important part of the experience. The sudden and vast evolution of brewing over the past 40 years altered the presence of hops in beer from barely there to in your face.

Hops have two purposes: bitterness and aroma. Bittering hops, usually a different type than aroma hops, are added at the beginning of the boil. (The liquid in the boil comes from the mashing of barley malt.) Traditionally, hops that contribute aroma were added later in the boil, sometimes twice; that is still in practice. Boiling will reduce the level of the hop oils present, so more hops can be added toward the very end of the boil.

A process called dry hopping, known by brewers of yore but not widespread, was adopted by early craft brewers and is now used by all. Brewers add dry hops to the next phase of brewing, the fermentation, where yeast is added to the cooling beer.

The two basic roles of dry hopping are to replenish the aromas and flavors of hop oils lost during the boil, and to introduce a more intense hop experience, quite often using hops that differ from those in the boil, or combinations of hop strains. Double dry hopping – adding more to the fermentation tank later on – again replaces lost aroma characteristics, or adds new ones, and enhances the overall hop character of the beer.

It’s a complex and demanding process, complicated more through experimentation with test batches to find the right mix. Today’s brewers are challenged even further in the lab and on the brewing floor by the continuous proliferation of new hops: the fruits of scientists out at the hop farms who succeed in producing winning strains that could soon be in high demand.

Many, probably most, of the new hop strains don’t pass muster during trials. When they do, it is the skill and the art of the craft brewer who will take it to the next critical phase – an actual beer that is balanced, maybe unusual, trendy perhaps, and likely to please a crowd. The final exam is judged by the consumer. If it passes, a hop is born.

Today, and for nearly a decade, the most popular craft beers have been IPAs that project aromas of various fruits, maybe pine, and are hazy. In its early incarnations, that style was not hazy and didn’t have the tropical fruit profile, and the main hops of choice were Cascade, Chinook and Simcoe, joined later by Citra and Mosaic. Those are still in wide use, but the new kids on the block are having their day.

Anyone who sells and/or consumes these types of craft beer are aware of the wild popularity of the melon aspect, or peach, or grapefruit zest. Yours truly is not a big fan of these, preferring earth, a touch of grass and a healthy bitterness. But there’s no denying that today’s serious and eager beer fans like the new aromas. I must be old. (Useless factoid: The word “fan,” short for fanatics, came from the nascent sport of baseball, and was first uttered in 1883 on a St. Louis ball field or in Kansas City in 1885. Take your pick. Fan fans are still fighting over it.)

Two Roads Brewing Company in Stratford, Connecticut, has developed a series of seasonal beers under the name SHOP – Specialty Hop. The series features an exhaustive number of recently developed hops. The foundation of each beer remains the same, though the hops differ in each, and the beers rotate on a monthly or bimonthly basis.

Here are just a few, also from other area breweries.

It would be nice to taste these right now without getting off the couch, wouldn’t it? Too bad you can’t lick the page or the screen. Well, you can, but …