Old myths die hard, and some don’t die at all. When I was a young lad, I learned that bock is the beer that was collected from the bottoms of the barrels and served in the spring. People drank it and liked it, I noticed, but I vowed never to go near the disgusting stuff. Nobody disabused me of the false belief; I had to learn the truth on my own.

The story probably came about because bock traditionally had a heavier body and higher alcohol content than other beers. Let’s lay the tale to rest, shall we? Any brewer will tell you that it isn’t possible. The dregs left after fermentation are unfermentable, which is why they are left over. They are not beer, and they can’t be fermented again to make more beer.

So what is bock? It’s a lager, originally brewed in city of Einbeck in north central Germany, probably more than 500 years ago. The practice was to make the beer in the fall after the harvest, and let it lager over the long winter months for consumption in spring, around Easter. It was said to be a favorite of Martin Luther, the breakaway priest, and served at his wedding. Apparently the Einbecker brewery once put his image on their ur-bock labels.

Eventually, folks in Munich, the big beer city to the south, developed a hankering for bock and began brewing it themselves. Thus it became the spring beverage of the Teutonic folk, and began to diverge into several styles. 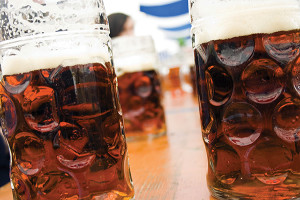 Bock beer is malty, with a faint hop presence at most. It has a strong malt aroma, sometimes with toasty overtones. Traditional malts are the rich-flavored Munich and Vienna. Hop bitterness is generally only high enough to support the malt flavors, and some sweetness can carry into the finish. The beer is well attenuated, meaning that the yeast has been allowed to do its work until fermentation is complete.

A good bock tends to be medium to medium-full bodied in the mouth. Carbonation should be moderately low, and the overall experience is of a smooth lager, yet strong and malty. Two aspects of brewing play a significant role in the character of a bock: one is a long boil of the water, grain and hops prior to fermentation, and the other is decoction mashing, wherein some of the contents of the grain mash (before the boil) are removed, heated and reintroduced to the mash. Raising the heat of the mash will cause the break-up of the starch molecules of the unconverted grain grist and produce a higher degree of sugar extraction for the fermentation. This makes it possible to achieve the crisp, dry maltiness that is characteristic of continental lagers.

Helles bock, maibock, doppelbock, weizenbock and eisbock are derivatives of bock beer. Helles bock is a lighter colored brew, just as strong as a dark bock but made with paler malts. Maibock is brewed for May celebrations, and is a heavily malty, chewy beer. Weizenbock, as the name indicates, is brewed with the addition of wheat with the barley, and tends to be brewed with the same higher strength as its sibling, doppelbock. Eisbock (ice bock) is very strong, and is made by freezing the bock and removing the ice crystals.

Doppel means double, and a doppelbock is brewed with more malt than a traditional bock. They tend to be darker, indicating the presence of some darker malts. Apparently there is no upper limit for the alcohol strength. Doppelbock is a fine warmer for cool weather, and has been called “liquid bread” because of its high grain content. It has been said that cloistered men who fasted during Lent survived on this brew alone.

The first doppelbock was brewed by the monks of St. Paula in Germany. They called it Salvator, and something like it is still available from the Paulaner Brewery. For a reason that is not clear, most doppelbocks that came afterward added the suffix -ator, as we see in Spaten’s Optimator and Ayinger’s Celebrator.

The name bock, in case you were wondering, is derived from Einbeck in the Bavarian dialect. Bock also means billy goat in German, which is why you will often find the image of a goat on a bock label.