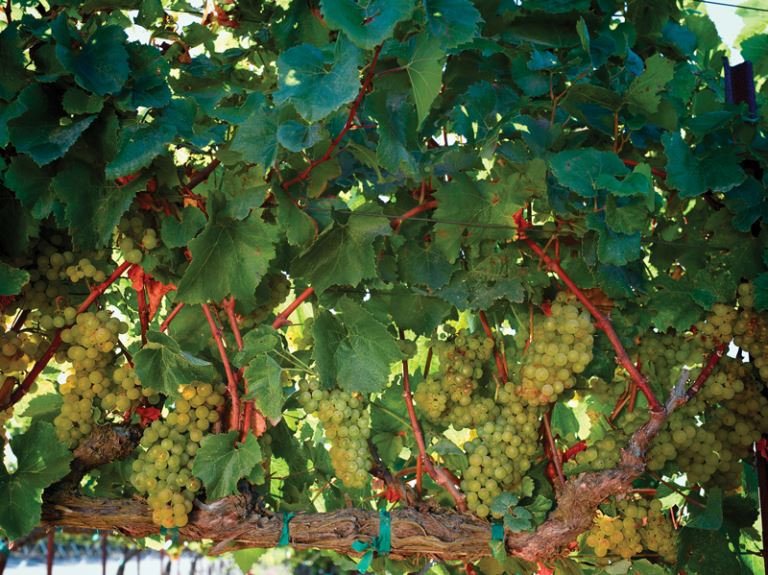 Unlike many California winemakers, Kristen Barnhisel doesn’t worry much about acidity. “In Monterey’s cool-climate Arroyo Seco region, we have plenty of acidity every vintage; building texture into our wines is what I’m focused on,” says Barnhisel, the white wine winemaker for J. Lohr Vineyards & Wines.

Working with Jeff Meier, J. Lohr’s President and longtime Director of Winemaking, Barnhisel works solely on crafting the estate’s white wines, a position that founder Jerry Lohr has always emphasized. “Jerry has always known that this kind of focus is what is required to achieve the kind of quality we are looking for,” Barnhisel explains.

Although most famous for robust Paso Robles Cabernets like the iconic Hilltop and the much-loved Seven Oaks, J. Lohr began in Monterey in 1972. Recently, the winery has been quietly increasing their focus on white wine production with new plantings, experimental clonal selections and innovative winemaking techniques. Their commitment to whites has paid off in a growing line-up that ranges from Rhône-style blends to Burgundian-inspired Chardonnays, with Rieslings and Sauvignon Blancs in between.

“Jerry first planted Chardonnay in Arroyo Seco over 45 years ago,” says Barnhisel. “He’d spent a decade searching for the ideal place to plant his first vines, and saw the potential for cool-climate varieties here.” His pioneering hunch proved correct; thanks to the chilly breezes off nearby Monterey Bay, well-drained soils and intense fog, Chardonnay and Pinot Noir grapes yield intense minerality, bright acidity and layers of flavor. Other vintners soon caught on, and the Arroyo Seco AVA was officially established
in 1983.

Those original 280 vineyard acres have long been responsible for J. Lohr’s most famous and best-selling white, the Riverstone Chardonnay (almost 500,000 cases today), and have over time been expanded upon in size and scope to include small-volume, clone-focused wines. There are now nine different Chardonnay clones here, as well as more recent plantings of Sauvignon Blanc, which also thrives in the rugged coastal climate. “The valley pulls wind down the valley which shuts down the vines and gives us a longer growing season and fruit with greater complexity,” explains Barnhisel.

The region’s longer growing season is particularly evident in J. Lohr’s October Night Chardonnay, a richly layered and beautifully balanced wine named for the time of year and day when it is harvested. “All grapes for this wine are hand-picked and hand-sorted in the vineyard at nighttime so the grapes maintain maximum freshness,” Barnhisel describes. A sister wine, the Arroyo Vista, shows a very different side of Chardonnay—more high-toned elegance—reflecting the diversity of soil and clone types.

Jerry Lohr’s dream of having a winery dedicated to white wine production in the Arroyo Seco came true in 2015 when J. Lohr opened their 100,000-square-foot Greenfield winery adjacent to their vineyards. “The ability to process the grapes immediately has been incredible,” says Barnhisel. “You can taste the difference in the freshness of the grapes. With less travel time and less oxygen exposure, we have better phenolics, mouthfeel and texture.”

Barnhisel also applies her white wine expertise in Paso Robles, where J. Lohr planted Viognier, Roussanne and Grenache Blanc at the Gean Vineyard in 2010. Located in the Adelaida District, it’s the western-most vineyard in Paso Robles and is atypically cool for the AVA, a result of its coastal proximity. “It’s really winemaking on the edge here—2017 was the first year it didn’t frost,” says Barnhisel.

The winemaking team is working with Syrah, Grenache and Cabernet here, and the Rhône whites are proving ideally suited to the day/night temperature swing and calcareous shale soils. The only downside: small acreage. Cynthia Lohr, Co-owner/Trade and Brand Advocate, notes that the Gesture tier—including a lush, ripe Viognier and RVG (Roussanne, Viognier, Grenache Blanc) blend—was originally only for club members and visitors. “Interest in these wines has exploded in recent years,” she notes, prompting their public, if limited, release. “Kristen’s deft touch with these wines speaks to both her connection to the vineyards and to the grapes.”

There is room for expansion in Arroyo Seco, where new vineyard blocks are almost ready to utilize and the team plans to plant additional new clones of Riesling. Though the region has been the spiritual home of this family-owned winery for nearly five decades, there is still so much to discover here, maintains Barnhisel: “It’s incredibly rewarding to find that perfect place where fruit flavors, aromatics, alcohol, acidity, texture and palate length all come into perfect balance,” she explains. “I’m always looking to achieve greater, richer texture and longer finish in these wines and that’s a journey that never really ends.”