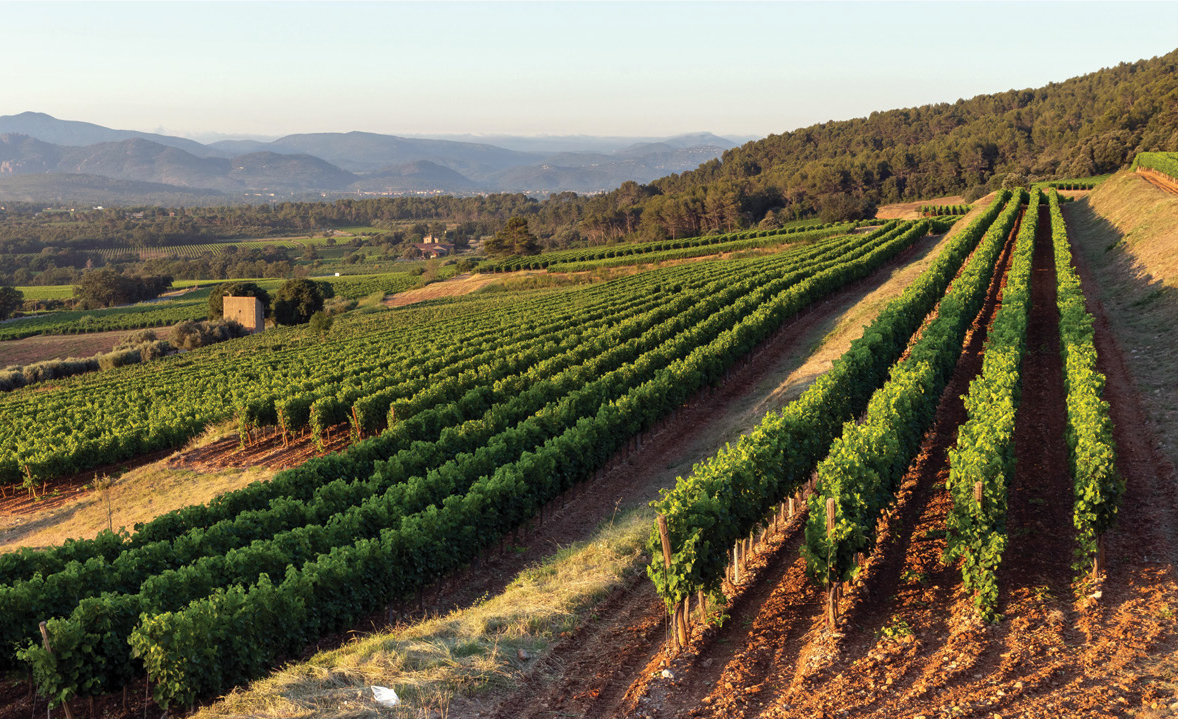 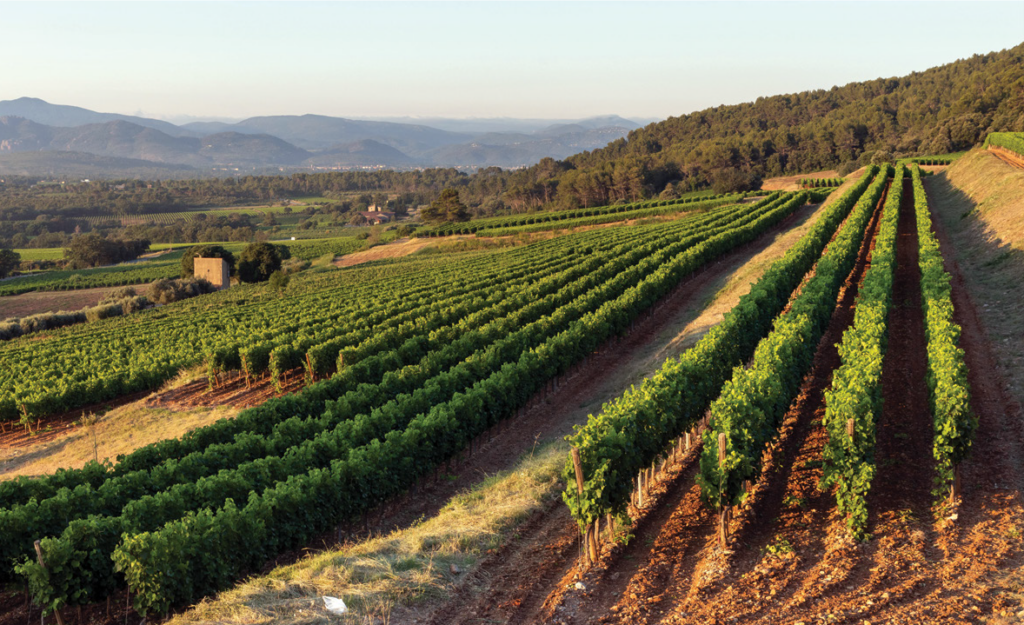 The 2021 vintage underscored the many challenges that southern French producers are facing amidst climatic extremes and rising temperatures.

Rosé—particularly rosé from across southern France—is undeniably tied to warm-weather drinking, with sales peaking in the spring and summer seasons. But could the glorious Mediterranean summers that these fresh wines evoke, ideal for drinking rosé, hint at future problems?

France has risen 1.5°C, with predictions that up to two months each year will suffer hydric stress by the end of the 21st century. On top of heat waves, drought, and fires, there are also spring frosts, hail, and excessive rain that can plague the winemaking year. In November 2021, OIV predicted that climatic extremes reduced overall French wine production by 27 percent in 2021 compared to 2020, regarding the vintage as being one of French wine’s most difficult wine years on record.

2021 highlighted the challenges that climate change poses to winemakers throughout southern France, particularly when it comes to their much-loved rosés. Some producers are adapting to maintain their house styles, while others are embracing change by experimenting with new sites and varieties—and all are taking steps to manage and combat the future effects of climate change.

Climatic extremes have thrown numerous problems at Provence winemakers in recent years—and 2021 was no exception. In brief, a wet winter was followed by an unseasonably hot spell in March, which launched early growth. Then followed an unexpectedly intense and extensive frost in early April, with temperatures falling below 5°C, which significantly reduced volumes of Grenache and some Syrah, especially in the western half of the region.

The summer was not overly hot, but had minimal diurnal temperature variation with hot nights and little rain slowing down phenolic development. Late August rain was welcome, though heavy, localized hail in late August and early September decimated some vineyards in the central region. Massive forest fires north of Saint Tropez and along the northern edge of the Massif des Maures further reduced volumes, with some parcels burnt and others potentially suffering from smoke taint.

Most agree that 2021 was a difficult vintage to work with. Despite these challenges, first tastes of the 2021 rosé in Provence are revealing delicate structure with good acidity. Initial fears of a short supply were stopped by abundant late summer rains, which washed off ash and led to big, juicy grapes resulting in higher volume. Nevertheless, there has been pressure on sourcing fruit by négociants, who make 75 percent of Provence rosé and rely on blending for house styles.

Bertrand Léon, head winemaker at both Château d’Esclans and their négociant business Cave d’Esclans, was originally concerned that there would be a shortage of fruit from traditional suppliers, making it harder to “maintain consistency of style from year to year, although vintage variation will become more evident
[if climatic extremes continue].” 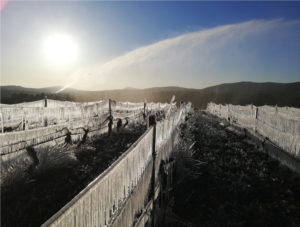 Though it was not a challenge in 2021, hotter summers are increasingly becoming a problem for producers. “Freshness, fruit, aromatics, and acidity will decrease, alcohol will increase, and the wines will become heftier if action is not taken,” says Gilles Masson, the director of Le Centre du Rosé in Vidauban, France. This has made some producers favor sites that are cooler year-round, including those that are higher in altitude or north-facing. But warming temperatures year-round are a threat.

“Warmer winters are more of a problem than hotter summers,” says Léon, noting that these encourage earlier budburst, as it did in 2021. Once these hot spells encourage budburst, extreme frost can decimate the buds. Smaller diurnal variation with warmer night temperatures during the summer of 2021 also impacted ripening and development.

Chêne Bleu in the Luberon demonstrates the advantage of higher-altitude sites: their vineyards were untouched by the frosts. “At 550 meters, our long, cold winter delayed budbreak, and the frost sank to the valleys below,” says Nicole Rolet, the owner of Chêne Bleu. Nearby Château Vignelaure in northern Coteaux d’Aix fared less well—winemaker Philippe Bru said his Grenache at 400 meters was badly hit. While this affects his volume, he is confident his range of varieties at Vignelaure will help him adapt to vintage variation.

“We have 11 varieties to play with, including Sauvignon Blanc, Vermentino, Roussanne, and Marsanne to blend in with red varieties,” he says. “I am okay with the style being slightly different, as long as the quality is good.” A slightly cooler summer also yielded fresh, aromatic fruit, and Bru remains positive that his 2021 rosé will be good. 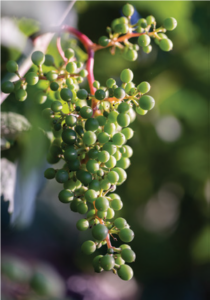 At Château d’Esclans, warmer winters are a bigger issue than warmer summers, as this encourages earlier and more frost-vulnerable—budburst.

Other producers—particularly those in Languedoc and the southwest—have also been forced to adapt with other grape varieties to replace badly-hit grape varieties, such as Mourvèdre. The Tavel cooperative Les Vignerons de Tavel and Lirac noted that their Clairette was hit by frost resulting in a much darker vintage. Tavel producer Richard Maby, the winemaker of Domaine Maby, lost significant quantities of Grenache from coulure brought on by the combination of a hot spring followed by frost, resulting in poor pollination and irregular bunch development.

“Luckily, we harvest manually, meaning we can select only the ripe bunches [of Grenache], but for those who machine harvest, sorting will need to be particularly stringent,” he says. Other producers in Tavel were initially worried that their Grenache, the mainstay of their wines, would be badly hit, but the frost passed them by. Nevertheless, Maby is considering planting more of the later-budding white varieties Clairette, Picpoul, and Bourboulenc for extra freshness and Mourvèdre to lower the alcohol. While the 2021 Tavel vintage may not be large, the quality has delicacy and vibrancy.

Some have shifted away from Grenache purposefully, as it has often become too hefty and alcoholic in recent hot summers. Siblings Matthieu and Maud Negrel of Mas de Cadenet in Provence find Cinsault is working well for them on the limestone slopes of Sainte Victoire (located at 250 meters in altitude). “Cinsault is paler, it has naturally lower alcohol, freshness and attractive aromatics,” enthuses Matthieu. Similarly, Alexis Cornu, the winemaker at Château de Berne in Provence, is experimenting with the historic variety Rousseli. “It has a lovely pale colour, silky texture, large juicy berries, [is] late ripening, [has] lower sugar levels, and crunchy acidity, and [it] has great blending potential with Grenache,” he says.

Investment Decisions for the Future

Julian Faulkner, the owner and winemaker of Le Grand Cros, notes that for small to medium- sized domaines, where to invest is the biggest dilemma. “We are juggling between investing in sourcing water for drought years, hail nets, or shifting to varieties better suited to climate change,” he says.

Jean-Francois Ott, the co-director of Domaines Ott, says changing canopy management has been strategic in maintaining his house style. “We aim for sufficient canopy to shade the berries which results in thin, pale-skinned grapes with a greater pulp to skin ratio, but still a small enough canopy to reduce transpiration,” he notes. Cornu started experiments in August 2021 with cooling mist sprays in the vineyard. Transpiration remains a vital issue, especially in a vintage like 2021.

While the summer was cooler than usual, which helped with freshness, many struggled with a lack of water, resulting in small, concentrated grapes. Ahead of the harvest last August, producers were enthusiastic about the quality of fruit, but concerned that it could start to raisin without rainbefore the harvest. Ultimately, rain in late August and early September helped to give plumpness.

Olivier Dauga, a consulting winemaker for properties like Vins Breban and Domaine de la Navarre in Provence, notes that “this has been a complex year” and that the smaller grapes require slightly different winemaking. “We are aiming for fruit and freshness, so we are focusing on careful berry sorting and very gentle pressing to avoid extraction of tannins and bitterness, which will result in the rosés being less structural,” he says.

Adaptability has been the key for many producers in maintaining quality—and will likely continue to be important going forward. At the time of publishing, Provence had declared a state of drought, and temperatures hovered dangerously low for a few days in early April before resuming warmer temperatures. The big question is whether adaptation to climate demands will force a change in style, especially with the addition of different varieties. Whatever happens, producers know that they have to prepare for unpredictable weather conditions and increased insurance costs, making it increasingly difficult for small estates to survive.