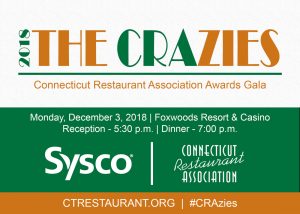 The Connecticut Restaurant Association (CRA) announced its award winners and finalists for the 2018 CRAzies Awards Gala presented by Sysco. The 24th Annual Awards Gala for the CRA has been renamed the CRAzies, which will recognize the exceptional ability and talent of the restaurant community.

The honorees for the Connecticut Hospitality Hall of Fame, Restaurateur of the Year, Vendor of the Year and CRA Friend of the Industry have been selected and each of them will be recognized on Monday, December 3, 2018 at Foxwoods Resort Casino.

The Griswold Inn (Essex) and The Place Restaurant (Guilford) will be inducted into the Connecticut Hospitality Hall of Fame. The 2018 Restaurateur of the Year will be Dorjan Puka and Scott Miller of the DORO Restaurant Group, which owns and operates three West Hartford restaurants (Avert, Treva and Zohara), one Manchester restaurant (Artisanal Burger Company) and a full-service catering company. The CRA Vendor of the Year is The Chef’s Warehouse, which is a nationwide specialty food distributor that is based in Ridgefield. Rounding out the award announcement is the CRA Friend of the Industry, which will recognize State Senator Joan Hartley (D-Waterbury), who has served nine terms in Connecticut’s 15th district.

The finalists for the other six categories have been selected and public voting is now live at ctrestaurant.org.

The vote of the public, the CRA Board of Directors and an additional panel of judges from the industry will help select the overall winners from each category.