Could a High-End Cava Wave be on the Horizon with a New D.O. and More Premium Bottlings?

By now, the reputation of Cava in the U.S. is established as fresh, fun, lively and a great value. Yet there are plenty of people working hard at broadening the understanding of what Cava is and can be. While Prosecco, Cava’s Italian peer, has parlayed its similarly easy-to-drink bubbly style into explosive sales growth, the big picture for Cava is certainly on the upswing.

First of all, Prosecco and Champagne are both providing momentum for the overall sparkling category—which bodes well. Perhaps more important, the pipeline of Cava into the U.S. has matured, with variety and quality as generous as ever.

Take for example the wine list at Jaleo, José Andrés’ flagship Spanish restaurant in Washington, DC. By-the-glass offerings are fairly routine, but the full bottle list ranges much wider, starting at Balma Brut Nature Reserva 2013 priced at $48, through six or so expressions priced between $60 and $80, all the way to the Gran Reserva Particular Brut Nature Recaredo vintage 2005, which tops the sparkling section at $165.

Vintage Cava isn’t the only area where the makers of the mostly-Penedés produced wine are upping their game; a new classification, Cava de Paraje Calificado, or qualified single-estate Cava, has been created, with estimates from Spain that about 1.5 million bottles—about 1% of total production—will qualify for this newer designation.

Producers with approved estates include Recaredo, Alta Alella, Juvé & Camps, Freixenet, Codorníu, Gramona and Castellroig. To qualify for the classification, grapes must be hand-harvested from 10-plus year old vines with a maximum yield of 8,000 kilos per hectare. After the primary fermentation, the wine must be kept on the lees in bottle for at least 36 months, and be brut. It’s a sign that those working to elevate Cava’s reputation are on to something.

“The reality is that Cava offers tremendous value at all price points,” says Andy Myers, Wine Director for Andrés’ ThinkFoodGroup. “When compared to the price point of most other sparkling wine, it’s easy for folks to see the magnificent value offered in Cava. We have been excited to work with higher-end Cavas. José has been at the forefront of appreciating and showcasing the finest Cavas for years.” 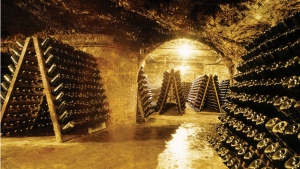 Secondary fermentation in the bottle connects Cava-making with Champagne; seen here, bottles resting on their lees at Freixenet.

To understand the breadth, quality and consistency of Cava, one need look no further than the region’s best-established brand, Freixenet. Ironically, in retrospect Freixenet’s success has never made Cava a household word in part because “fresh-he-net” sounds French to the American ear—and the brand’s iconic frosted black bottle took on an identity of its own.

Above ground, the Freixenet headquarters in San Sadurni de Noya, features state-of-the-art laboratory-like control for every stage of production; below, literal miles of of aging caves speak to the challenge of producing quality fermented-in-bottle sparkling wine on a large scale. Of course, Freixenet now comprises multiple expressions, including brut, rosé, sweet cuvée, “ice cuvée” and even kosher (“Excelencia”). The Collection also includes Segura Viudas, an estate with roots back to the 11th century, whose seven Cavas for the U.S. range from the easygoing Aria label to the unique pewter-based Reserva Heredad.

In 2014, the Ferrer family marked the 100th anniversary of the first bottling of Freixenet, releasing the Casa Sala (named for the other side of the family, joined by marriage in 1889). The wine begins with fruit from 60-year-old vines, hand-picked, crushed manually in the winery’s original press (built in 1900), gravity-fed and bottled unfiltered, then is aged on the lees under natural cork for five or more years and riddled and disgorged by hand. Ahead of the Cava de Paraje Calificado designation, Casa Sala delivered as a luxury vintage Cava.

From Agreeability to Ageability

Cava’s identity in the U.S. remains fundamentally enigmatic; nine out of ten wine-drinking Americans probably can not name a single grape in the typical Cava blend. But that’s fine—how many Americans know Glera is the grape of Prosecco? Most Cava is not supposed to be complicated; by nature, it is straightforward, delivering gentle fruit, persistent bubbles and a clean finish. Between Champagne’s acidic/yeasty intensity and Prosecco’s stealthy sweetness, Cava cruises the center lane. Which makes it easy to sip, perfect for brunch or an aperitif or with food.

Veronica Soler, wine buyer and store manager at New York City’s Despaña Vinos y Más, says as sparkling sellers and consumers begin to understand the age-worthiness of many Cavas, sales should grow. “Xarel-lo is a remarkable grape and some wines made with it can rival Champagne in terms of its ability to age, and most of the time at a fraction of the price,” she says.

She mentions a seminar in New York City last year where top vintage Cavas and Champagnes were showcased blind, and how tasting them together re-established in her mind their potential. “Spain is still not a category Americans focus on too much although that’s changing and we’re just scratching the surface of quality Spanish sparkling wines,” says Soler.

But as Marc Clapes, Export Director for Giró Ribot whose Cava labels include the popular brand Paul Chenau, puts it, there’s a lot of work still to be done to raise awareness of Cava as more than a value buy. “Sometimes it’s frustrating because importers see Cava as a commodity, but it’s much cheaper to make Prosecco, given the time we age Cava,” he says. “Everyone wants a cheap Cava they can sell for less than $10 a bottle, but that way the farmers and growers can’t make a living. We need to show importers that it’s much more than an entry level wine.”

The Prosecco boom may have stunted the growth of Cava somewhat, although with prices of the Italian sparkling on a roofward trajectory, Americans who have developed a taste for imported sparklers might shift their loyalty.

Myers says time and exposure are needed to break out of the value bubbly bottom shelf. “The more people that get exposed to wines like Raventos i Blanc, Gramona, Recaredo, Llopart, etc., the more Cava will sweep them away. As Cava ages longer on its lees, it develops the same exciting autolytic notes found in Champagne, like biscuits, toast, nuttiness, etc. This depth and complexity carries the same layering and intrigue as significantly more expensive Champagnes.” With prices of Champagne as well as Prosecco expected to continue rising, higher-end Cavas will be poised to pick up the sales slack, he says.

And then there’s the minor but notable impact of Conca Riu Anoia, the breakaway region of sparkling Spanish producers that includes the sommelier favorite Raventos. At Basque-influenced Cooks and Soldiers in Atlanta, General Manager Nick Quinones sells a 2014 Raventos Conca del Riu Anoia for $17 a glass. “I fell in love with this wine, and I sell it more to folks looking for a luxurious glass of sparkling wine,” says Quinones. “This is more for someone who wants a little more character, flavor and weight. There’s definitely a luxury sparkling crowd out there and this wine is for them.”

The small group of Conca producers broke away in 2012, unhappy with what they saw as a rush to bulk production of low quality wines. With tougher rules—all estate-produced and bottled, traditional varietals, organic and biodynamic, vintage, with a minimum of 18 months aging and the disgorgement date listed on the label—the producers there hope for approval for a designation in a few years, says Pepe Raventós of his family’s widely respected pioneer winery.

He’s not optimistic that the new DO Cava classification will do enough to get farmers to lower their yields and produce better grapes, but does see some changes going on in the region. “We’re seeing other producers shifting to better quality winemaking, a shift to more natural and organic, as well as more attention to viticulture, lower yields and the grapes themselves and not just the production methods,” he says.

But there’s still plenty of work to do. “What we need is importers who believe in this product,” says Clapes. “I have no doubt more expensive Cavas still represent a great value for money. It’s important to note in the last 10-15 years Cava making has improved a lot in general. We learned how to make them, now we must learn how to market them.”