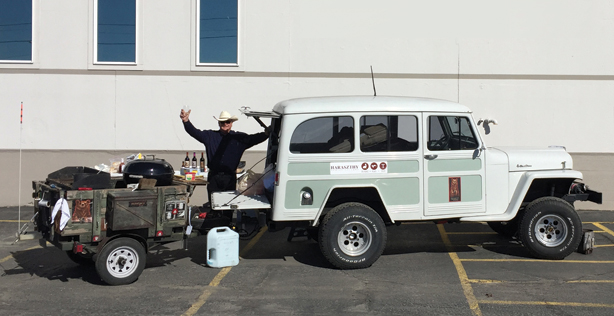 Haraszthy’s Trail: A California legend criss-crosses the nation to meet, greet and eat  with trade partners 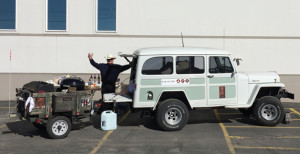 Vallejo (Val) Haraszthy, founder and winemaker at Sonoma’s Haraszthy Family Cellars, will spend the better part of this year driving a 1951 Willys Jeep around the country. He pulls behind him a trailer with Weber grills and spends his days meeting with—and cooking for—the distributors and retailers throughout the country that sell his wines, racking up thousands of miles along the way.

Compared to those who use airplanes and rental cars to sell their wines, this may sound like a tough journey. Yet, as he is quick to point out, it’s actually a piece of cake compared to the pilgrimage made by his great-great-grandfather, Agoston Haraszthy. A Hungarian immigrant who arrived in America in the 1840s, Agoston packed his large family into a wagon and headed to California on the Santa Fe Trail via the treacherous Donner Pass. “He came west in one type of wagon, and I’m heading east in a different type of wagon,” says Haraszthy.

In fact, it’s Agoston’s story that Val Haraszthy is traversing the country to tell. Agoston (in addition to becoming the first sheriff of San Diego) founded California’s first commercial winery—Buena Vista, which still operates in Sonoma. The reason he is called the “Father of the California Wine Industry,” however, is because he introduced European grape varieties (vitis vinifera) to replace the humble Mission grape that had been used for California’s wine production. Accepting a commission from the governor, Haraszthy went to Europe and collected thousands of vine cuttings and planted them in California, kick-starting the wine industry as we know it.

But wait—the story of Haraszthy’s inherited legacy gets even better: Agoston became friends with General Mariano Vallejo, the last of Mexican governors of Northern California and the founder of Sonoma in 1834 (and a winemaker himself). Vallejo was captured in 1946 by Sonoma settlers who wanted the territory for themselves. (“A high energy group of local settlers who lowered the Mexican flag and hoisted a badly-drawn bear flag and declared the Republic of California—the state’s flag to this day,” explains Haraszthy). Vallejo was lucky to survive, and two of his daughters later married two of Agoston Haraszthy’s sons, creating a multi-family wine dynasty.

A fifth-generation Sonoma native, Val Haraszthy took a job in 1972 as a cellar rat at Buena Vista, the very estate founded by his great-great-grandfather. After years honing his skills, he founded Haraszthy Family Cellars in 2006, dedicated primarily to the production of California’s signature grape, Zinfandel.

“Zinfandel is so expressive of the place where it grows—it changes so much from one place to another,” says Haraszthy on why he loves the variety. He makes wine from the three most important California regions for Zinfandel: Sonoma Valley, Lodi and Amador County. “Each has a different spice rack flavor profile driven by clonal selection and the site itself—the soil, the sun, the wind and dirt,” he notes. 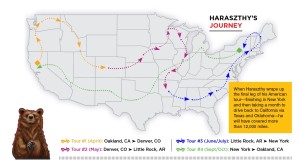 But wine is about more than simply what’s in the bottle; it’s the individuals, the stories, the connections. “This is a people-driven business,” says Haraszthy. “When I was developing this company, I would stop by stores and restaurants and really try to make a connection with the people selling my wine. But I have 40 distributors nationally and haven’t met 90% of them. I wanted to find a way to broaden my reach in a really authentic way that would make an impact—without rental cars and business suits. So, I got the Willys Jeep and a BBQ wagon.”

Haraszthy isn’t attempting rarified gourmet cuisine (although his BBQ spice rub is a highly coveted secret recipe). “I grill some pork loins, cook some beans and slaw and we sit outside and get to know one another, and I tell them the story of my family. It’s very simple, but it resonates in a memorable way and the reaction has been incredible.” His inspiration was one part “the Oscar Mayer Wienermobile of my childhood” and one part “Wishbone, the cantankerous old cook on the [1960s] television show Rawhide. He would cook hearty trail food and always had your back when any trouble came along. I named my trailer after him.”

When Haraszthy wraps up the final leg of his American tour—finishing in New York and then taking a month to drive back to California via Michigan, Texas and the Southwest—he will have covered more than 12,000 miles. It’s not too early to call the tour a success: Haraszthy has tripled sales in many markets (“We’re at 25,000 cases this year but are confident that we will be a 100,000 case brand in a few years,” he predicts.)

Some things are just better the old-fashioned way, says Fred Franzia, CEO of Bronco Wine Company, the exclusive national distributor for Haraszthy Family Cellars: “When I was younger, we would sit in meetings with Ernest Gallo or Robert Mondavi or Louis Martini. Now you go to those same meetings and everyone’s a lawyer or a public relations guy. Val is a dinosaur—he’s a throwback with a real family and a real history.”