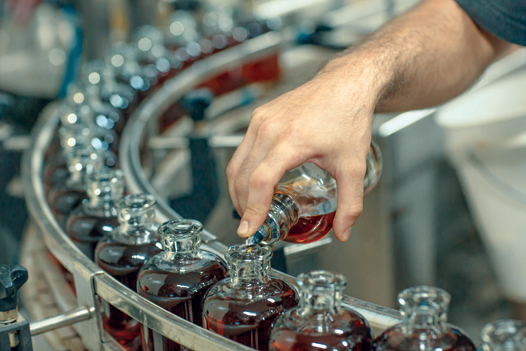 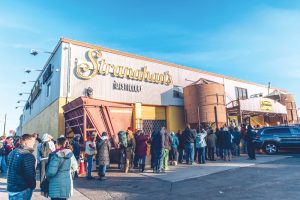 Stranahan’s has a cultlike following for its annual Snowflake limited-edition; fans camp out and line up for a chance to buy two of the 1,400 bottles released the first weekend of December.

With ‘Craft’ brands thriving, large suppliers are buying up — and empowering — small distillers

Perhaps large spirit companies learned a lesson from how slowly major brewers responded to the growing interest in craft beer, but whatever the case, they have shown an increasing willingness to swoop in and grab small distillers who show promise.

The handful of deals rung up in the past year or so are surely not the last, but they are worth noting: in fall of 2016, Constellation Brands October picked up acclaimed Utah-based High West Distillery for $160 million, and followed up in January with minority investments in whiskey producers Catoctin Creek Distilling Company and Bardstown Bourbon Company. In December 2016, Rémy Cointreau took on Seattle-based Westland Distillery; that month also saw West Virginia’s Smooth Ambler, maker of Old Scout Bourbon and Greenbrier Gin, enter the Pernod Ricard fold. In fact, Pernod Ricard had kicked off 2016 by acquiring a majority interest in small batch German gin Monkey 47. 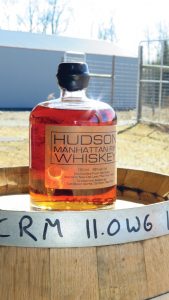 Tuthilltown Spirits was among the first American craft operations to join forces with a large firm; William Grant & Sons took over in 2010 and bought it outright in 2017.

William Grant & Sons arguably was ahead of the curve, taking over New York State’s Hudson Whiskey line from maker Tuthilltown Spirits in 2010, before last year buying the entirety of the producer’s enterprise. Proximo Spirits also got in the craft-owning game early; they bought Stranahan’s Colorado Whiskey that year as well. And Bacardi similarly grabbed Kentucky-based American whiskey maker Angel’s Envy in 2015.

“Within our broader whiskey portfolio of Irish and Scotch, it made sense to enter into the original partnership to give us a foothold in the American whiskey market,” says Andy Nash, Vice President Marketing for William Grant. “We have a great reputation especially in bars for building our own brands, and there’s a lot we can do with super-premium bourbon. Many of these small distillers are one-man bands having to do everything from fermenting the mash to getting distribution, and we have sales and marketing, and distributor partners, and know-how in building brands over a long period.”

MEET THE NEW BRAND… SAME AS THE OLD?

For most of these small distillers, the effects of the entrance to the big time have been slow and steady, with the results mostly visible inside their walls. But shifts did take almost immediate effect.

“There have been a ton of changes,” says Wes Henderson, co-founder with his late father Lincoln Henderson of Angel’s Envy. “The balance for a company like us is to be able to maintain our identity within a larger framework while being able to utilize what a larger company can provide for us—using the mothership to do the things that keep us from being what we should be.”

Ironically, small distillers say they prize the freedom gained by being introduced to a company filled with experienced hands. 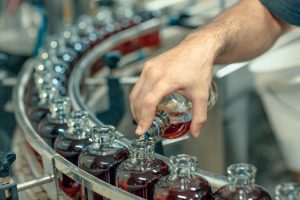 Topping off at the Hudson Whiskey bottling line.

“For us, what is most important is that it gave us back of the house support from a financial and legal perspective,” says John Little, CEO of Smooth Ambler. Handing over trademark protection, compliance with the TTB on labeling and other essential matters to PRUSA staff frees him to represent the brand to the trade and consumers. Of course, access to the Pernod distributor network provides a leap into being able to sell more product more efficiently. “But for me personally what it allowed us to do is basically to make and sell whiskey rather than have to spend so much time on every other detail,” says Little.

CLEARING THE ROUTE TO MARKET

PRUSA’s Senior Vice President of New Brand Ventures Jeff Agdern says that’s exactly the focus for most craft distillers: production capacity and route to market. “What we’re trying to do is find a way that we can partner with brands like Smooth Ambler to enable them to continue to do the things they have proven to do well and then plug them into aspects of our sales and marketing division,” he says.

To help with expansion of the production facility in West Virginia, the distilling team at PRUSA’s Canadian Hiram Walker facility were tapped, “on a consultant basis rather than a takeover basis. It’s accelerated the speed of learning for them,” Agdern says. And while recommendations that come from such teamwork may be mostly minor and internal, they contribute at the very least to consistency in production—an issue that has dogged many craft suppliers. 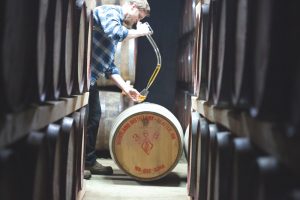 Barrel-sampling at Westland in Seattle, known for championing American single malts; they have also developed a Native Oak series of limited editions.

Rémy Cointreau has taken a similar approach with Westland, says Mark Brenne, CEO of the distiller acquired as part of Rémy’s interest in international malt whiskey. “Rémy liked the vision the Westland team had for American single malt, but it’s going to take many years to get recognition. We’ve been trying to make sure the they can focus on making high quality products every day.” To do that, the distilling teams of Westland and Rémy’s Islay Scotch whisky maker Bruichladdich have been visiting each other’s facilities.

Constellation has experience with smaller brands, many of them in need of the sort of hand-selling High West requires, says Constellation’s Vice President of Marketing Carl Evans: “With smaller brands, we tend to be very thoughtful about what that growth trajectory is going to look like and what parts of the market are going to be like for growth. The first thing we think about is not so much what’s going to change but what’s not going to change. We get involved because there is some magic there that we want to maintain or grow. ”

Challenges like larger capacity for distillation and aging are simple enough to manage to help smaller brands hit certain levels of growth, but being thoughtful as the brands grow is important as well. “Scarcity is a real thing and can drive demand. If you’re thoughtful and let consumer demand drive where the allocations go, you can make smart decisions about allocation,” says Evans.

For example, High West’s Midwinter’s Night Dram, released in November, sold out in certain markets within weeks; with Constellation’s aid, High West can now monitor those accounts so they can adjust allocation for next year’s release. 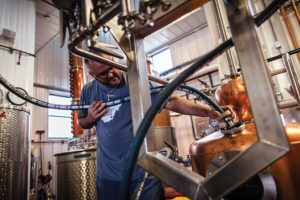 A common theme among craft operations bought by large firms: the freedom from day-to-day minutia, paperwork and marketing has allowed them and to concentrate on consistent quality in their products. Above: Smooth Ambler.

Smooth Ambler’s Little cites help with long-term planning, especially PRUSA’s skills in forecasting, as giving him a clearer picture on what to expect to be able to bottle in the future. “It’s a complex spreadsheet program from analysts taking every product and every blend and proof and even evaporation into account, letting us know where we’ll be in five to ten years,” he explains. “We were shooting from the hip before, making whiskey as fast as we could. Now we know how much wheated or rye whiskey we can make and how much we’ll have in the time to sell it.” 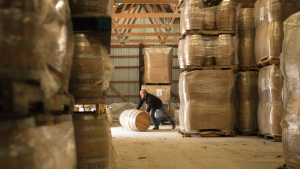 One of the big hurdles for small producers is sheer capacity; that’s no longer an issue at Tuthilltown, where brand new barrels await their turn holding Hudson Whiskey.

What gets lost sometimes in the initial headlines and reactions is the conjoined reality of acquirer and acquiree: both sides of the transaction are deeply invested in the brands’ reputations.

“We have to make sure as we grow we don’t lose our sense of connection to the brand. That’s the thing I worry about the most,” says Little. “That’s a challenge: if your are selling ten times as much, how do you have that many interactions with your fans?” When he stopped selling two Old Scout iterations, it was rumored Pernod Ricard was the cause; in fact, the cause was low inventory.

A balance is required, says Wes Henderson at Angel’s Envy: “They [Bacardi] are letting us continue to do what we’ve always done and be the company they acquired two years ago. We made strong assurances to our consumers that were were going to do the same, maybe become more efficient but not change what our brand identity was all about. We sold, but we didn’t sell out.”