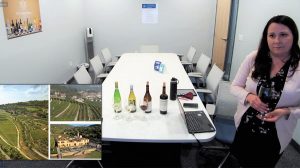 Rhode Island wine lovers enjoyed a virtual wine tasting and regional tour with selections from four Italian suppliers on April 8. It was led by Shawna Dietz of Johnson Brothers of Rhode Island and produced in conjunction with James Morrison of People’s Liquor Warehouse and Dino Passaretta of Vanda Cucina, both of Warwick. Wine included Pieropan Soave Classico, a white wine from Veneto, made from Garganega; Jermann Pinot Grigio from the Friuli region; Renato Ratti Barbera, a classic red from the Barbera d’Asti Battaglione DOCG; and Allegrini Palazzo Della Torre, a red blend of 40% Corvina Veronese, 30% Corvinone, 25% Rondinella and 5% Sangiovese from the Valpolicella Classico area of Veneto. Selected wines were made available for preorder to the more than a dozen participants through People’s Liquor Warehouse, while Vanda Cucina prepared a bruschetta plate for pairing selections, which were also picked up prior to the online event.