Several hours away, in Providence, Rhode Island, Nikki’s Spirits is looking to distinguish itself in a different way: It aims to become one of New England’s preeminent craft-beer emporiums. So the staff at Nikki’s has been studying hard on all things pertinent to America’s favorite alcoholic beverage, particularly those new varieties that have come into the forefront in the past two decades. 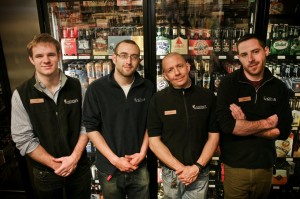 Two stores, two very different settings, yet with a common thread: an emphasis on “beer smarts” via the Cicerone Certification Program.“We sell quite a bit of beer and we’re very passionate about it,” notes Mitch Ancona, proprietor of Ancona’s. “In a market such as ours it’s always good to know your product and how it should be served. We’ve long seen it as necessary for all of our staff to have a strong base of knowledge in wine styles and varietals, and the same applies to beer. Cicerone certification provides that knowledge.”

Upon first glance, “Cicerone” might appear to be somebody’s name but instead, it’s the Italian word for guide. Its founder is the well-known beer taster and author Ray Daniels, who conducted the first certification exam in early 2008. It’s been going strong ever since.

“Cicerone certification aims to designate a person as having proven expertise in selecting, acquiring and serving today’s wide range of beers,” notes Virginia Thomas, business manager at the Chicago-based Cicerone. Thomas points out that like wine, how beer is handled and served has a dramatic impact on both shelf life and taste. Without proper techniques, beer can be ruined.

Earlier this year, the organization granted its 10,000th Certified Beer Server designation. The ranks of the higher levels are considerably thinner. “The material can be extremely difficult. I compare these tests to a fairly intense college-level exam,” notes Michael Iannazzi, co-owner of Nikki’s Spirits, who is now studying for the second certification level. “But we currently sell more than a thousand different beers. Customers come to us all the time with questions, especially about pairing beer with food. Cicerone certification is all about providing better service to our customers.”

Not to mention building the business. In the next few months Nikki’s will move across town to a building closer to downtown and I-95, with its steady stream of travelers. The new store will be more than double the size of the current one. Iannazzi pairs his own beer expertise with that of his brother (and partner) David, a wine expert. “Certifications such as Cicerone enable us to continue to grow,” he points out.

In similar fashion, when Ancona first learned about the Cicerone program, he was quick to sign up along with three others on his store’s team. Fully 80 percent of his staff has earned at least one type of spirits-related certification.“Our wine director and one of our wine sommeliers were among the four of us to earn the basic Cicerone certification,” says Ancona. “On the other side of the holidays, when things quiet down, I will begin studying for the next level and I expect two or three others to join me.” “In my view it’s always good to know more about your product, how it’s made and proper serving techniques,” Ancona adds. “When you take the time to do that, it shows and it ultimately is good business.”