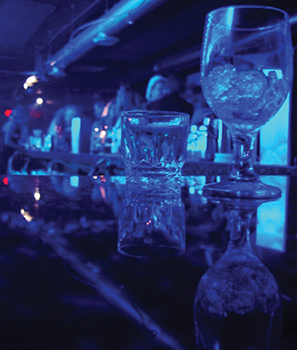 Clients planning to open a restaurant or café often come to my law office for their initial appointment with me, bringing with them architectural plans showing how their new establishment will be laid out. Most follow a certain formula: kitchen back in a far corner, bar room up front, dining room somewhere in the middle. The clients have a vision of how the place should look, how it should welcome and beckon customers in, and how it should operate logistically as wait staff scurries about delivering food and drink.

But such plans, whether drawn on paper by an architect or just mentally fixed in the client’s mind, quickly butt up against the doctrine of “effective separation” embodied in Connecticut state liquor law.

Designed to protect minors, the doctrine of effective separation involves an evaluation of how well-separated a restaurant ’s or café’s bar room and dining room are. A minor needs to be able to go to the dining room, and arguably the restroom, without having to enter the bar room.

Sometimes this is not hard to accomplish, as the bar room is envisioned as a fully separate room, with full floor-to-ceiling walls separating it from the rest of the space. But often it is a very large problem. Frequently, the new establishment is located in an existing building, perhaps a narrow storefront in a downtown area, with one single door to enter from the adjoining sidewalk.

There’s only so much room in such a situation. And generally, most establishments are looking to have the most open floorplan they can. The sole doorway into the restaurant or café can’t open directly into the bar room. Sometimes there is enough space to partition off a little hallway through which the minor would pass going through to the dining room. Sometimes “half walls” are constructed, topped with glass panels, partitioning off the bar room, without creating a full wall.

Every situation is going to be somewhat different, since no space is identical, and no one solution fits all. So, five minutes into that initial appointment with me, the client’s well-laid plans are sometimes hitting an iceberg, as I explain everything they need to know about effective separation, something most have never heard of before. Plans get changed, thoughts are recalculated, and we work to figure out how to submit to Liquor Control a plan that includes effective separation.

A recently released legal document, called a Declaratory Ruling, from Liquor Control finally may offer some relief to this situation. The ruling states that Liquor Control has the authority to grant exceptions to the effective separation requirements “for good cause shown.”

As to new restaurants or cafes opening and applying for a liquor license, Liquor Control will be able to review plans and prospectively approve a floor plan that does not comply with effective separation. It’s possible Liquor Control may amend their standard application form, to add a request for this waiver. If that doesn’t happen, the applicant or their attorney will need to compose a letter, asking for the waiver, to attach to the application.

Note that, in both cases, “good cause” must be shown. While there is no track record yet of how Liquor Control staff will evaluate what good cause is in these requests, past history suggests that economic reasons, such as the cost of construction, will not succeed as the sole reason for granting a waiver.

While again, every site is different and every circumstance different, I do have in mind several reasons which could be cited in many situations and are likely to be granted.

My best guess is that there are hundreds of restaurants and cafes spread across Connecticut which currently do not comply with effective separation. The issuance of this new ruling is an opportunity for those not in compliance to legalize their situation.

How is it that an existing restaurant or café has a liquor license, but may not be in compliance with effective separation? It’s possible that physical alterations were made after the liquor license was granted, which removed walls, and no permission was sought from Liquor Control, as is necessary. There may be other reasons where the situation has long existed, out of compliance, but no one has caught on yet.

Thanks to the new ruling, licensees can get “on the right side of the law,” and existing licensees should jump to take advantage of this opportunity.

Jerry Farrell, Jr., is an attorney-at-law in private practice in Wallingford. He served as Commissioner of Consumer Protection and Chairperson of the Liquor Control Commission. Farrell represents clients in all three tiers of the industry. Through Connecticut Liquor Law Educational Services LLC, he offers a variety of instructional courses covering areas of interest to the industry. Contact at  jerry@ctliquorlaw.com.