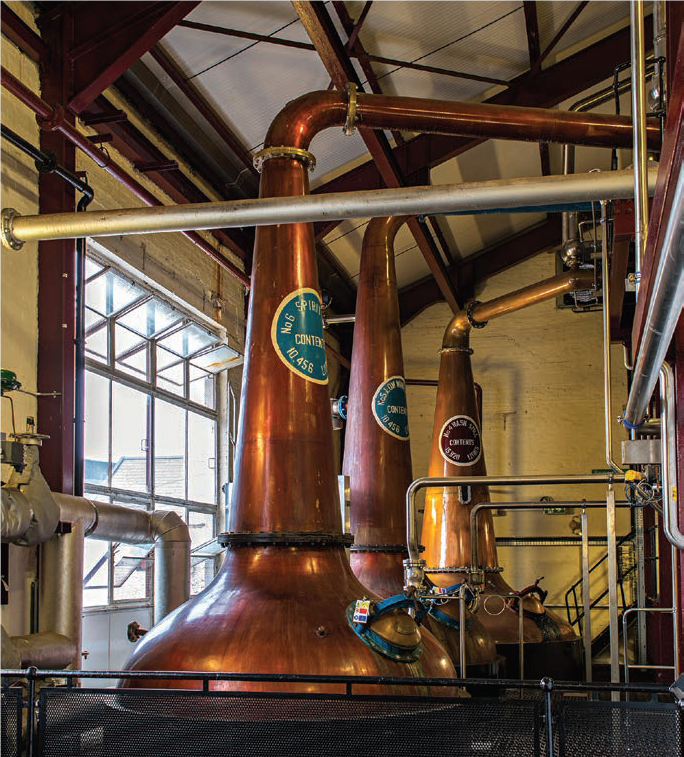 Bushmills is an old guard distiller still leading the way in terms of innovation.

With all the new distilleries, brands and line extensions emerging from Ireland, whiskey retailers have an unprecedented array of choices that show no sign of narrowing. Accordingly, the proverbial Irish eyes are still smilling broadly at this vibrant sector. Powered by Irish whiskey’s inherently smooth style and the swelling popularity centered on a handful of powerful, widely available brands, the category is not just small and mighty—it is expanding dramatically in breadth.

After decades of relying on the light and fruity blended triple-distilled spirit that predominates, Irish styles are exploding. Single malts and pure pot still expressions, of course, but also grain whiskey, double distilled variants, peated malts and extended aging and finishing in non-traditional barrels—rum, marsala, or exotic woods like acacia. There’s even an Irish rye now.

Just about everything good that is happening in whiskey overall is happening with exuberance in the Irish sector.

“There are some great opportunities in innovation,” says Colum Egan, Master Distiller of Bushmills. “There are a lot of consumers who have been drinking Irish whiskey for some time who looking for something new and innovative within the category. Most of us are coming out with different and new expressions that appeal to different sectors of the market.” Bushmills jumped in two years ago with Red Bush, aged in ex-bourbon barrels rather than a mix of those and Sherry casks.

Egan recently ended his chairmanship of the Irish Whiskey Association, and says ensuring that traditional techniques and understanding were available to new entrants—about 20+ distilleries now operate, up from four in 2014, with as many as 20 in development—was the reason the group was founded.

Major producers are tickled in general with the competition. “It is great for the category, for the growth of Irish whiskey in the U.S. and for the consumer,” says Sona Bajaria, Vice President, High End Irish Whiskey, Pernod Ricard USA. “At Midleton we have an open-door policy. We want to maintain the quality and integrity of Irish whiskey and as such offer our support and expertise to these distilleries in their set-up phases.”

The basis for optimism is strong: Irish whiskey remains one of the fastest-growing categories. Sales internationally are predicted to hit 13 million cases by 2020, up from 10 million in 2017.

On the flip side, younger brands are certainly aware—and appreciative—of the way that Pernod Ricard’s Jameson in particular has popularized Irish whiskey, setting the table, so to speak, for new entries.

As the Irish shelves are already not nearly as crowded as more established sectors like single malts and bourbon, the playing field has a wide open and level feel to it, which spurs innovations—like Tullamore D.E.W. Cider Cask Finish and Jameson Black Barrel—as well as newcomers like Slane (2015) and Proper No.Twelve 2018).

Launched in 1999, Bernard and Rosemary Walsh scored in Ireland with their ready-to-drink Irish coffee, which became the Hot Irishman, and cream liqueurs years before developing two distinct Irish whiskies. In 2007 they launched The Irishman; Writers’ Tears Copper Pot debuted here in 2015.

The Teeling family had been in the whiskey business since 1782, but brothers Jack and Stephen have the family name in the spotlight by experimenting with diverse barrel finishes; releasing a rare “single grain” whiskey; and opening the first new distillery in Dublin in 125 years in 2015.

Operating on her family farm in County Clare, a mile from the coast, Louise McGuane is a leader in the revival of whiskey “bonding,” which practically disappeared in the 1930s. For the J.J. Corry brand, named after a legendary nearby whiskey bonder, she blends and matures whiskies from multiple sources.

Lambay Irish Whiskey is a crossover project between the House of Camus and the Baring Family’s Revelstoke Trust. Lambay Small Batch Blend is malted barley and grain whiskies, blended, triple distilled and matured in bourbon barrels with a Cognac cask finish. Lambay Single Malt is unpeated, tripled distilled and finished in Cognac casks that have been exposed to the sea air and maritime winds on Lambay Island.

But no new entry in Irish whiskey has come close to the impact of that latest new name: Proper No. Twelve. Created by mixed martial arts champion Conor McGregor, Proper No. Twelve sold out its initial run last fall in less than one month. A blend of Irish grain and single malt whiskey, Proper No. Twelve pays homage to Crumlin, aka Dublin 12, the neighborhood where McGregor was born and raised and which is known for its rich soil and pure spring water. 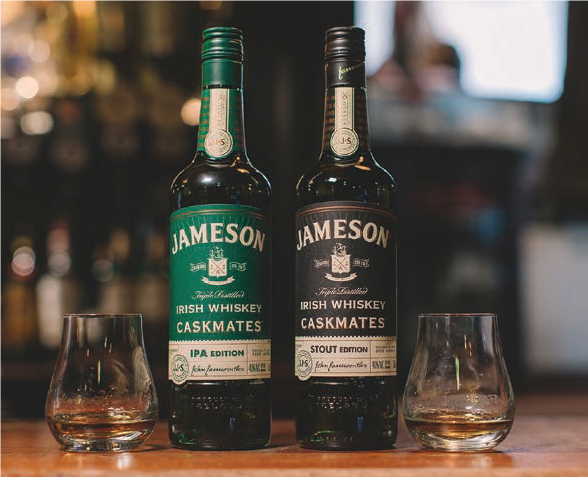 The Caskmates program has brought Jameson critical recognition beyond the brand’s identity as a favorite shot.

Most industry watchers expect robust growth to continue. “I see Irish whiskey still only scratching the surface of consumer interest in the U.S.,” says Powers Brand Leader Ken Reilly. “Irish whiskey only represents 6% to 8% of the U.S. whiskey market, well behind American and Scotch whiskey. The challenge for all non-Jameson brands is to overcome the lack of understanding of Irish whiskey as a distinct subset of whiskey, and to reinforce the unique profile that Irish whiskey offers the drinker.”

“With several Irish whiskeys already bringing to market limited releases, other innovations and special bottlings will likely become a mainstay as the category grows,” says Slane Irish Whiskey co-founder Alex Conyngham. “There will be challenges resulting from increased competition in the marketplace, although this will encourage brands to further differentiate through innovation and flavor profile, which means more choice for consumers.”

The popularity of Irish whiskey as a smooth, easy-drinking spirit has set the stage for more serious expressions, such as Pernod Ricard’s single pot still Redbreast. // KiIlbeggan is even offering an Irish rye whiskey. // Bushmill’s is supporting Red Bush with aggressive online content and social media marketing.

The U.S. market has been dominated by Jameson with Tullamore and Bushmills the most prominent other brands. But the popular style has its limits, says Jack Teeling, Managing Director of Teeling Whiskey Company. “Shifting consumer tastes are driving the segmentation with consumer and trade interests in more unique and interesting Irish whiskey.”

Others are eagerly looking to expand the palate. “We always strive to be at the forefront of trends in the industry,” says Conor Neville, Brand Manager, Tullamore D.E.W. “Innovations such as Caribbean Rum Cask and Cider Cask were two of our most recent successful launches. Because of their popularity, we’ve incorporated Rum Cask into our permanent portfolio and have reintroduced Cider Cask for a second fall season,”

Some distilleries focus on particular areas of tinkering. Teeling not only explores finishes, but tweaks its yeast mix and malt selection. Slane uses three types of casks, one a heavily toasted and medium char virgin oak cask, unusual in Irish whiskey.

Jameson has had success with Caskmates done in exchange with craft brewers, notably Caskmates Stout and Caskmates IPA. “With Jameson Caskmates, we have seen the power of crossing over categories by tapping into consumers’ love of craft beer,” says Jameson’s VP of Marketing, Paul Di Vito. 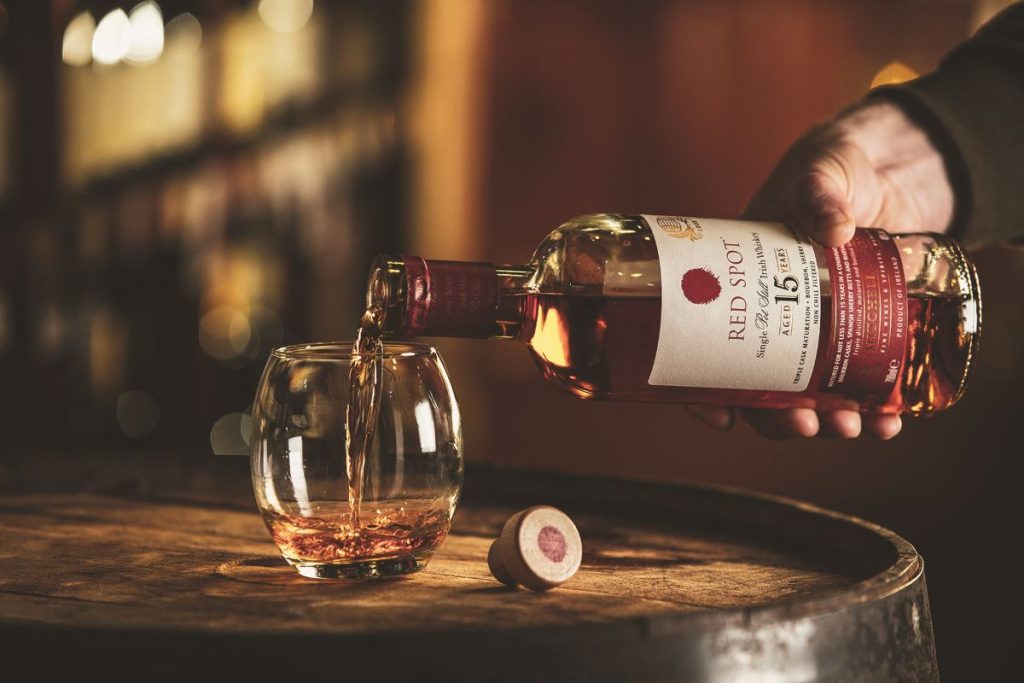 Red Spot is among the multiple ultra-premium Spot whiskies produced by Pernod Ricard at the Midleton Distillery.

For the high-end Pernod brands, finishing techniques, like Redbreast Lustau, and Red Spot, launching in the U.S. in early spring, are significant. Recently, The Spot Range experimented with the releases of Green Spot Château Léoville Barton and Green Spot Chateau Montelena, the first single pot still Irish to be finished in wine casks.

And if consumers respond to the new iterations, the flood will continue. “Trying out different woods and flavor profiles wouldn’t make sense if the market wasn’t open to it,” says The Sexton’s Master Blender, Alex Thomas. “The consumer wants something different and for me as a blender that’s a dream come true.” 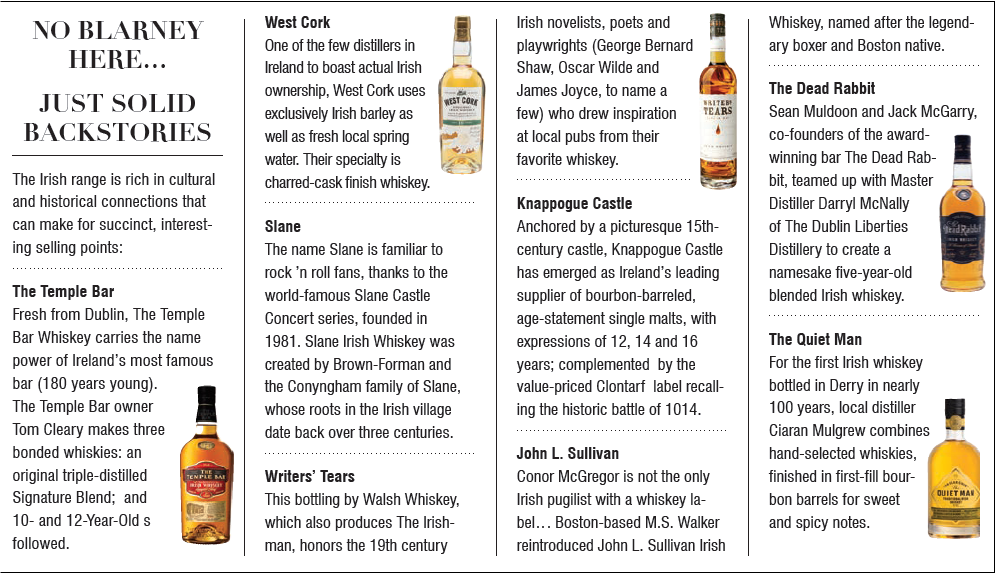