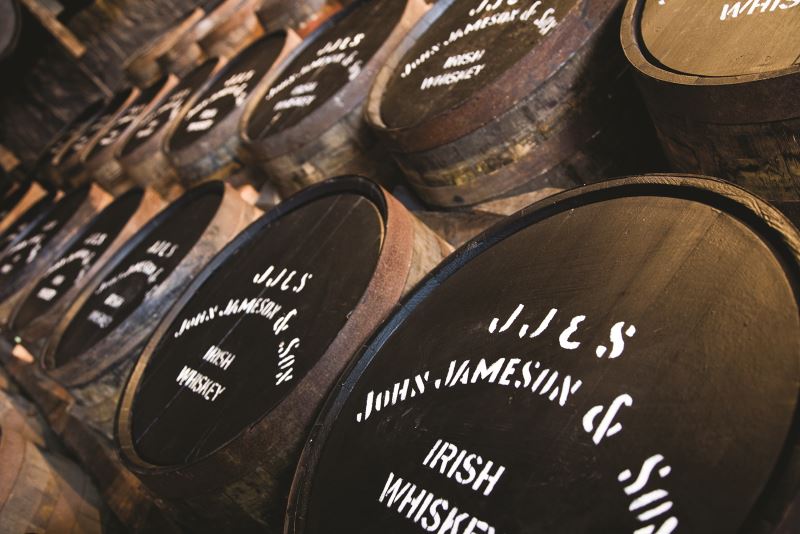 Irish whiskey continues to be the big international growth story in the spirits space, with another year of double-digit gains for the U.S. market. And it’s become a force to be reckoned with, as the base it’s been growing from isn’t nearly as small as it used to be.

Jameson, the industry leader in volume and recognition, is also at the forefront of innovation

According to Bord Bia, the Irish food board, revenue from Irish whiskey exports to the U.S. market surged 16%, slightly outpacing the 14% jump in exports to European Union countries outside of Ireland. The Distilled Spirits Council reported 11.3% volume growth for the category in 2017, now totaling over 4 million cases in the U.S.

It seems that Irish is finally reclaiming its place on the world stage. It had been considered, for most of the 19th century and the early 20th century, a spirit of prestige before World Wars, trade wars and American Prohibition helped hasten its fall from prominence—to be usurped, primarily, by Scotch. 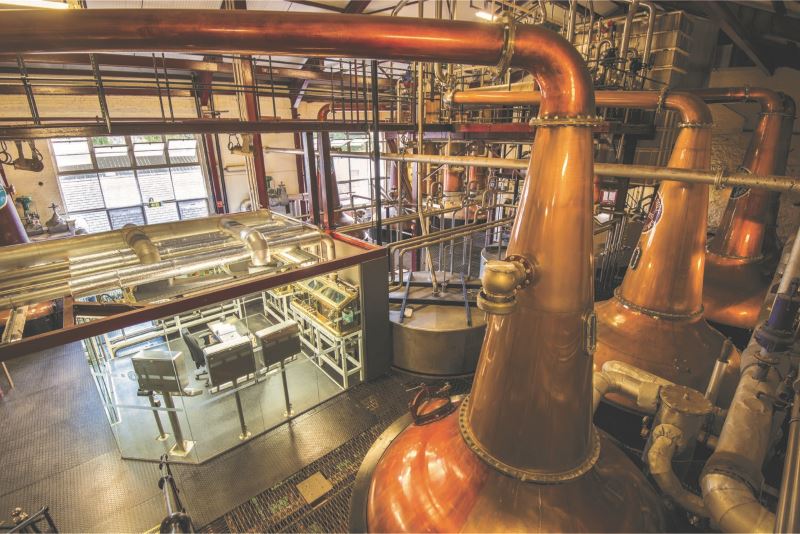 Bushmills, in County Antrim, is the oldest distillery on the island of Ireland, but the stills are thoroughly modernized

“It’s a really exciting time for Irish whiskey as there’s been a category-wide commitment to superior taste and quality that has brought on its current boom,” says Paige Parness, Senior Brand Manager for Tullamore D.E.W., owned by William Grant & Sons. “I think the reason it resonates with consumers so much is that there’s a camaraderie element to how it’s consumed—in groups, with good friends in bars and social settings—that adds to its appeal.

Until recently, most U.S. consumers had easy access only to high-volume Irish blends like Jameson and Bushmills—which have certainly represented the genre well—but the category’s resurgence has created an opportunity for above-premium styles like single pot still, single cask, single grain and, yes, even single malt. 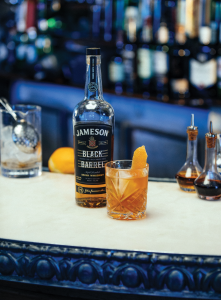 Jameson Black Barrel, featuring extra char, is one of the permanent extensions to the popular line.

Bill Thomas, owner of Washington, DC’s iconic whiskey mecca, Jack Rose Dining Saloon, says that the market for higher-end Irish whiskey has always been there, it was just a matter of making it available to the consumers who were ready for it—beyond travelers to Ireland bringing back bottles with them. “The problem was accessibility,” says Thomas. “We’re finally getting it imported and into broader markets in the U.S.”

Thomas points to major market events like Beam’s purchase of Cooley Distillery from founder John Teeling in 2012 as significant factors in Irish whiskey’s expansion. Cooley producers of such brands as The Tyrconnell, Kilbeggan, Greenore and Connemara. “Even prior to that, Cooley was introducing some great stuff into the market in dribs and drabs,” Thomas notes. “And we’ve had some independent bottlers who were instrumental in bringing some stuff in.”

Pernod Ricard deserves a lot of the credit as well. Not only did the company expand the global market presence for the No. 1 Irish whiskey brand, Jameson, but it also whet Americans’ appetites for single pot still brands like Redbreast, Green Spot and Yellow Spot. Pernod’s Irish program has become a petri dish for experimentation, empowering them to continue releasing connoisseur-level bottlings for years to come. 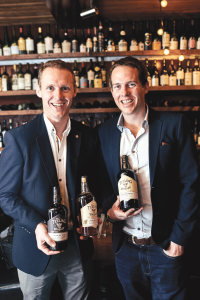 Heightened demand also lit the fuse for an Irish distilling boom of sorts. A decade ago there were only three working distilleries left in Ireland. Now there are 18 operating across the country, according to the Irish Whiskey Association (IWA), with at least 16 more in planning.

Among the new facilities to open recently was Dublin’s Teeling Whiskey Distillery—run by John Teeling’s sons Jack and Stephen—the first new distillery in the Irish capital city in more than 125 years. The Teeling family’s whiskey roots go back to 1782.

“Things are so different than when my father started [Cooley] in the ’80s,” says Stephen Teeling. “There’s now this young generation of progressively minded people seeking new taste profiles. The new generation of whiskey drinker tends to be very knowledgeable, very education focused.”

The IWA’s “Irish Whiskey Tourism Strategy,” which it launched a little over a year ago, seems to be bearing fruit. The organization reports that visits to Irish distilleries increased 11 percent in 2017, with 814,000 people touring the country’s production facilities. IWA’s goal is to make Ireland a world leader in whiskey tourism by 2030.

Here are a few highlights of Irish brands and producers, both new and established, that are making waves in the U.S. whiskey market.

Bernard and Rosemary Walsh launched their company in 1999, initially to blend and bottle their Irish coffee recipe, which became the Hot Irishman. Eight years later, they launched The Irishman 70 (marketed as The Irishman Original Clan in the U.S.) and The Irishman-Single Malt. The former is a blend of both single malt and single pot still Irish whiskey and the rare blend of whiskies made completely in pot stills. Walsh has since launched The Irishman-Cask Strength, as well as a 12 Year Old Expression. In 2009, it unveiled Writers’ Tears Copper Pot, distilled from 60% pot still and 60% single malt whiskies, aged in American oak bourbon casks. Writers’ Tears is a gold medal winner at the International Spirits Challenge in London.

In addition to making single pot still whiskeys like Redbreast, Greenspot and Yellow Spot household names among American drinkers, Pernod Ricard’s Irish Distillers unit has been having quite a bit of fun with its most famous trademark: Jameson. The company recently introduced the latest addition to its craft beer-themed Caskmates line. Jameson Caskmates IPA Edition is finished in barrels that previously held an India pale ale produced by an Irish craft brewer, giving the whiskey some hoppy nuances.

The company also launched Jameson: The Blender’s Dog, the second in The Whiskey Makers Series. The Blender’s Dog, a combination of mature whiskeys from the vast stocks at Jameson’s New Midleton Distillery celebrates the role of Head Blender Billy Leighton.

Tullamore D.E.W. has been experimenting quite a bit with its cask finishes. Last fall it launched its seasonal Cider Cask, which the brand says is the first whiskey to be finished in hard cider barrels. This spring, the distillery will introduce Tullamore D.E.W. XO Rum Cask Finish, its Original Triple Blend, finished in first-fill XO Caribbean rum casks. “Not only is the spirit a delicious new direction for the brand, with distinct tropical fruit and warm spice flavors, it also tells a story of seventeenth-century Irish immigrants playing a role in the early development of rum in the Caribbean,” says Paige Parness, Senior Brand Manager. “With it, we’re hoping to continue our story of championing great blends in distilling and world in which we live.”

Teeling’s Trinity range taps a variety of barrels from around the world. The first of those is Teeling Small Batch, a blend of malt and grain whiskeys, aged for approximately six years and married in Central and South American rum casks. Teeling Single Grain is made from corn and fully aged in California Cabernet barrels. Teeling Single Malt is finished in five distinct wine casks, giving the whiskey some striking fruit notes. 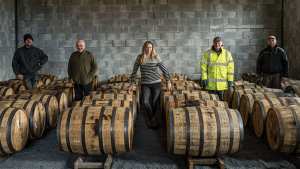 Louise McGuane is a leader in the revival of whiskey bonding in Ireland, which practically disappeared in the 1930s; under the J.J. Corry label, she blends and matures whiskies from multiple sources.

Louise McGuane is a leader in the revival of whiskey “bonding” in Ireland, which practically disappeared in the 1930s. Operating on her family farm in County Clare, a mile from the coast, and bringing back the J.J. Corry brand (named after a legendary nearby whiskey bonder), she blends and matures whiskies from multiple sources. Her first release, “The Gael,” is a 60% malt, 40% grain blend of whiskies from seven to 26 years old.

Fresh from Dublin, The Temple Bar Whiskey, carries the name power of Ireland’s most famous bar (180 years young) and also takes the bonding approach. In 2005, The Temple Bar owner Tom Cleary started with his original triple-distilled Signature Blend; 10- and 12-Year-Old whiskies followed. All three are finished in bourbon casks.

West Cork is one of the few distillers in Ireland to boast actual Irish ownership. They use exclusively Irish barley as well as fresh local spring water. Their Glengarriff Series features single malts aged in Sherry casks and then finished in barrels with a particular char; peat and bog oak char came first, Glengarriff Cherry Charred Cask and Glengarriff Apple Charred Cask arrive this spring.

Slane’s name is familiar to rock ’n roll fans, thanks to the world-famous Slane Castle Concert series, founded in 1981. Slane Irish Whiskey was created by Brown-Forman and the Conyngham family of Slane, whose roots in the Irish village date back over three centuries. Slane’s “Triple Casked” process uses virgin oak, seasoned oak and Sherry casks to produce a more robust flavor.

With a 15th-century castle radiating tradition and authenticity, Knappogue Castle has emerged as Ireland’s leading supplier of bourbon-barreled, age-statement single malts, with expressions aged 12, 14 and 16 years in good supply. Complementing the Knappogue Castle malts, the value-priced Clontarf label recalls the historic battle of 1014.

Lambay Irish Whiskey, a crossover project, combines the Cognac-making skills of Camus with the distilling expertise of the Baring Family’s Revelstoke Trust. Small Batch Blend is malted, un-malted barley and grain whiskies, blended, triple distilled and matured in bourbon barrels with a Cognac cask finish. A touch of Lambay Island Trinity Well Water makes the whiskey as unique as the island it calls home. The Single Malt is unpeated, tripled distilled and finished in Cognac casks that have been exposed to the sea air and maritime winds on Lambay Island.