May Cover Story: Has Rosé Hit a Wall? 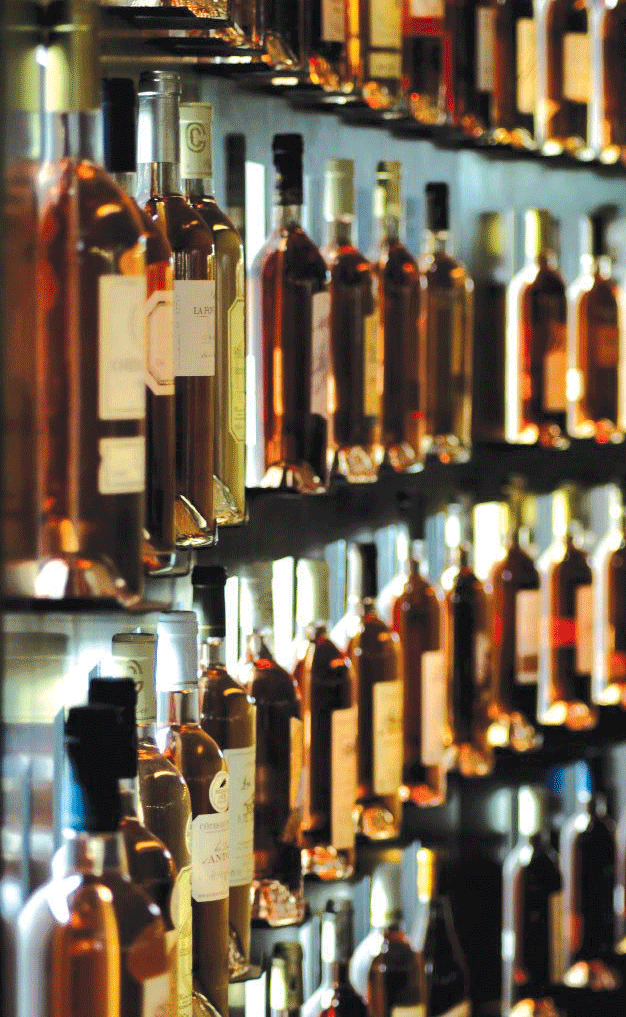 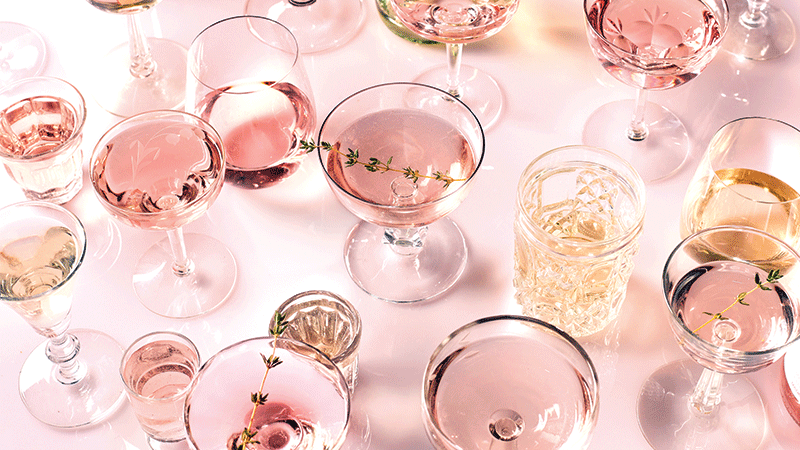 For a category that represents less than 5% of the overall table wine market in the U.S., rosé has taken on extraordinarily high visibility, spilling over into pop culture and social media—in turn strengthening the trend.

Pardon the pun, but the outlook for rosé is still rosy, right? The category’s double-digit growth just begins to hint at the pink success story. Over the past four years, rosé has almost quadrupled in volume and jumped in varietal wine rank from #17 to #9, according to Nielsen. Rosé’s largest segment is $11-$15, so premiumization is already at play. Plus, consumption is still accelerating. Americans drank 67% more rosé in 2017 than they did in 2016, and that year was up by 44% over 2015.

Beyond stats, this pale pink liquid has grabbed America by the buds, delivering fruity refreshment with an aesthetic (read Instagrammable) bonus. Rosé has joined the broader culture—from sweatpants to fashion shows, gummies to wedding favors—lending its pink halo to rosé cocktails, cider and spirits; inspiring social media hashtags à la #brosé and #yeswayrosé; even prompting marketers in other arenas to go pink when propping wine.

Ah, the sweet—I mean dry—taste of success. On-premise, off-premise, in all three tiers, it is crystal clear that rosé is a bona fide trend, not a fad. Yet success has brought an onslaught as producers around the globe angle in on the action, threatening to overwhelm the trade. Confidence in consumer demand is high; over-supply, on the other hand, could be problematic.

Two forces are at play here: Provence rising above the rosé pack, and the rest of the market exploding. We may find 2018 to bring both a glut—driven by the New World, new brands and new extensions—and a tangible tightening if not outright shortage of Provence coming off a good but tough 2017 harvest.

Perhaps the most significant sub-lesson of the current boom is that Provence—the spiritual homeland of rosé— is ruling the rosé roost. Suppliers report strong demand and in many cases are posting gains above the category pace. More important, Provence has set the standard for the industry for style, consistent quality and recognition. As Brian Mitchell, Beverage Director at the Connecticut-based Max Restaurant Group, notes, “People remember Provence rosé, and ask for it. They even expect to pay more for it.”

The Max Group is ready for the pink wave circa 2018. Provence rosés are in place by the glass at all the Max restaurants, plus one less expensive rosé—and at the flagship, a whole page of rosés beckons at the front of the list.

But rosé is neither place- nor grape-dependent. Dry pink wine is easy (and fast) to make, practically anywhere. The pipeline is getting stuffed. Samantha Dugan, French buyer for The Wine Country in Long Beach, CA, says the parade of 2017 samples started this year in early January. “Over-supply is a huge issue right now,” says Dugan. “Not only am I seeing probably three times the suppliers as I usually do, they are coming in with back vintages trying to get us to take a stand on those as well. It’s like everyone got the memo about rosé and they all ran out, without doing too much research, and got them some. It’s sort of nuts.”

HOT TICKET: Last year’s inaugural RoséFest drew 800 people to Sterling Vineyards in Napa Valley for a big pink al fresco party with 30+ Napa wineries pouring. This year, on June 9th organizers expect 1,000 pink fans; before the end of March, more than a third of the tickets were pre-sold, and a new VIP level added for 2018 sold out completely.

Relative ease of production and obvious demand are creating perfect-stormlike conditions: nobody is making less rosé for 2018, and many suppliers are making more. New labels keep coming, and established lines keep extending—to wit, Cavit and Kendall-Jackson are releasing rosés for the first time with their 2017s, in sufficient quantities to be featured nationally.

Last summer Josh Cellars launched their first rosé, and it quickly became the best-seller in its price tier and third-largest largest SKU within the category. The robust young Josh is flanked in the Deutsch portfolio by the brand-new Fleurs de Prairie (Provence) and Layer Cake (first rosé vintage 2015), among other rosés.

Pink wines are comprising powerful mini-portfolios within some companies. Kobrand has 11 rosés in the portfolio, from Argentina to Tavel; Louis Jadot and Fuedo Maccari were added last year, Tenuta de Salviano (Umbria) this year.  Frederick Wildman & Sons has 13 rosés on offer, and Rapitala from Sicily on the way.  Bronco Wine Co. has more than a dozen rosés, from California, Oregon and beyond; best-seller, not surprisingly, is their Côtes de Provence rosé, Sables d’Azur.

The Winebow Group has been especially busy stocking their pink departments. Their national import portfolios, Craft + Estate, Leonardo LoCascio Selections and MundoVino, comprise a total of 36 rosés, including seven sparkling, from around the world; 12 are new within the past two years, thanks in part to acquisitions. Some recent highlights include a new look for Fat Bastard (distinct from the rest of the line); a Pinot Noir rosé by Clean Slate from Germany; Provence rosé in cans from Amble + Chase; and three rosés from Greece.

Treasury Wine Estates, already keepers of the Provence gem Château Minuty (which was up 89% in 2017) and a cache of New World pinks, is adding “L’Etre Magique,” a Côtes de Provence rosé under their brand new Maison de Grand Esprit label.

It is interesting to note that 2017 was a big year for launches, and those debuts are naturally ramping up this year. Opici Wines’ Grenache-driven Provence rosé, Âme du Vin, earned a Wine Spectator “Top 100 Value of 2017” accolade in its first vintage, 2016; import quantities are being doubled for the 2017 vintage. Rodney Strong released 2,500 cases of a 2016 Russian River Valley Pinot Noir Rosé in a handful of markets. It was a rosy success—15,000 cases of 2017 are being released with some bundled with other Rodney Strong wines, à la “Red, White and Rosé.” 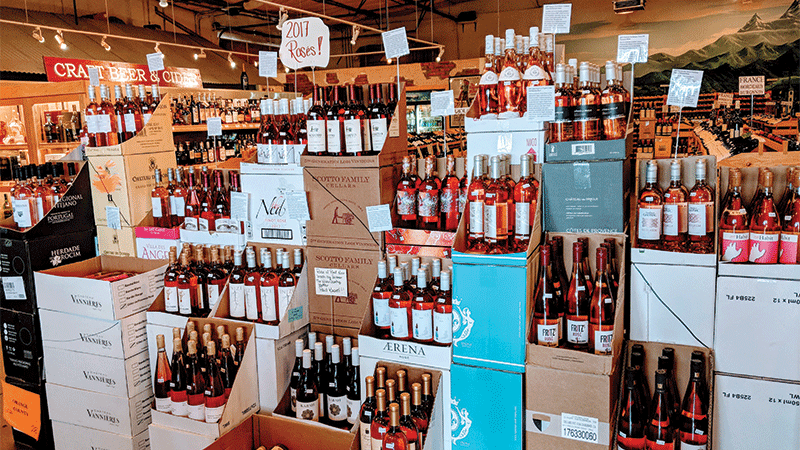 The Wine Country in Southern California, has been pushing rosé for 20+ years. “Côtes de Provence is king, without question for us,” says veteran buyer Samantha Dugan. “The new rosé-driven domestic producers tend to price themselves out and come winter I am still looking at $20 domestic rosés and all my Provençal wines in the same price are gone.”

Carving up the Big Pink Pie

The next logical question is: Can Americans drink all this stuff? As Constance Savage, VP of Supplier Relations at Kobrand, puts it, “The offering of rosé wines continues to increase for 2018, yet while the pie is continuing to get bigger, each slice gets smaller. The summer of 2018 will be a telling season and we will be carefully watching the market’s reactions. One of the questions is: Will we see some ‘fatigue’ at some point?”

The month of May, of course, is too early to tell. However, it is certainly not too early to say that, Provence aside, it is a buyer’s market at the re-sellers’ tier. Rob Bralow, GM of the retail store Blue Streak and owner of the wine bar BLVD in Long Island City, NY, notes: “I have completely stopped pre-ordering, except for extremely limited wines. There is enough rosé year ’round that I do not feel obligated to lock into a set number of cases.” In the wine bar, Bralow is carrying fewer options by glass, but more by bottle: “I find that customers do not really want more choice when they are out with friends—they want to pick between two or three options.” In the shop, he plans to stock about the same number of wines as last year: between 16-24 brands over the summer, expecting some to sell out by mid-August.

The very notion of “rosé season” is changing. Whole Foods is running a huge “special price” promotion that started the week after Easter and ends May 31st.Among the dozen (eight of which are touted as exclusive) featured wines: rosés from Portugal, Spain, Italy and Greece, as well two Provence rosés in both 750ml and magnum. 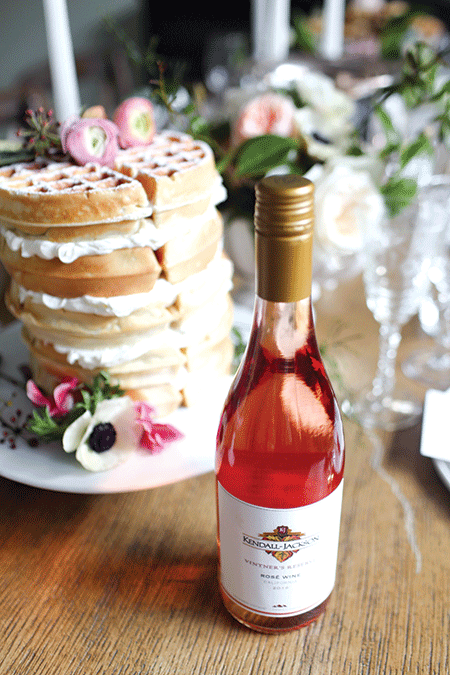 Kendall-Jackson’s inaugural rosé, a 2017, is bottled under screwtop.

Overall, there is plenty of tempered optimism in the wine industry with regard to the Great Pink Drink. “There’s no end in sight to rosé’s popularity,” observes Steve Slater, EVP and GM of the Wine Division for Southern Glazer’s Wine & Spirits. “Even while there are many new entries in the U.S. market, the core brands are not suffering. What’s different is that we’re seeing more domestic entries, from places like Oregon, Napa and Sonoma. And they are copying what’s popular in terms of the dry flavor profile, and pale, salmon-colored pink.” With only a handful of brands earning strong loyalty (Whispering Angel is one), Slater adds that American consumers are willing to try new rosés, especially by the glass.

Not surprisingly, The Palm by Whispering Angel, just released at the lower SRP of $14.99, is aiming to solidify the brand’s trend-setting cachet.Indeed, even with possible over-supply looming, there are plenty of positive signs—and still much room for growth. Marcy Whitman, Palm Bay International SVP of Marketing and Brand Development, explains why Palm Bay feels now is a perfect time for Cavit to enter the rosé fray: “We believe that the rosé category still has a lot of growth ahead.  There will be continued inroads as far as expanded seasonality and more growth in the consumer base as more men turn to rosé. In addition, the on-premise has not caught up with consumer enthusiasm for rosé and Cavit [at SRP $8.99] is well positioned to take advantage of all of these trends.”

Expect more packaging experimentation—especially among new brands. Even within Provence, known for its very traditional shape, suppliers are testing alternatives. Castel, importers of Aime Roquesante, a best-selling brand both in France and the U.S., has big plans for large formats—but they will have to wait until they have enough 2018 vintage wine to execute.

The reality of quality rosé in cans is happening. Winebow’s Amble + Chase and Pacific Highway’s Pure Provence are hoping that Provence’s cachet will translate from glass to aluminum.

Glut and shortage concerns aside, we can all expect more experimentation with blends and different grapes, perhaps even styles. As Provence continues to try to separate itself from the rest of the big Pink Wine Sea, wineries (and marketers) in other wine nations are bound to keep chasing the leader.