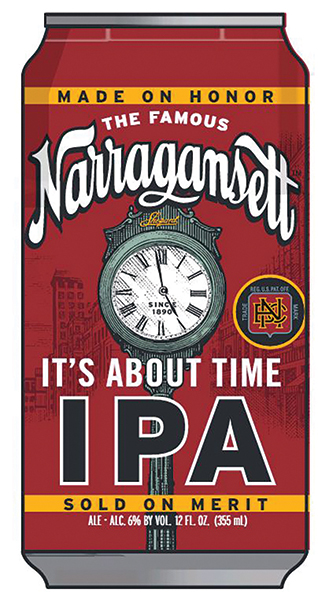 Narragansett Brewing Company released It’s About Time IPA, the first beer produced at the new Narragansett Brewery at The Isle Brewers Guild in Pawtucket, the first Rhode-Island-brewed Narragansett beer in more than 30 years. It’s About Time IPA mixes classic and complex malt character by using Pale, Caramunich and wheat malts with Cascade and Citra hops. The beer is red in color at 6% ABV, with notes of caramel, toffee, raisin and bread, and balanced with fresh floral and tropical aromas.

The artwork features Providence’s iconic Shepard’s Clock displaying the time, 4:59 p.m., to showcase the moment “before it’s acceptable to crack open a 5:00 brew.” Narragansett President Mark Hellendrung said, “This beer is our way of saying ‘thanks’ for the unwavering support loyal ‘Gansett fans have had over the years, and it represents what we’re all thinking about the journey — It’s About Time!”