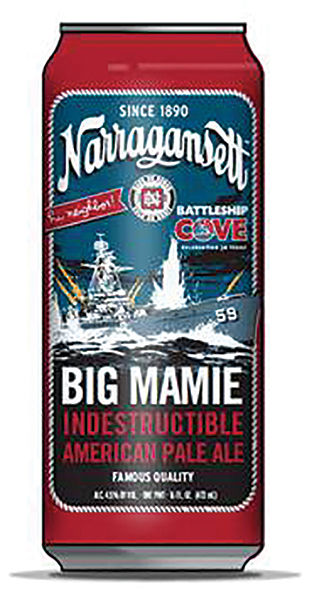 In November 2015, to honor Veteran’s Day, Narragansett Brewing Company released Big Mamie Indestructible American Pale Ale. The pale ale pays tribute to the USS Massachusetts, or “Big Mamie,” commemorating the 50th anniversary of the maritime museum Battleship Cove in Fall River, Massachusetts and Narragansett’s efforts to help save the warship. In 1964, “Big Mamie” was going to be stripped of its parts, and the brewing company led a fundraising movement with the local Massachusetts community to save the ship.

“I’ve come to learn that my wife’s grandfather served in the U.S. Pacific Fleet with Big Mamie in WWII, and this release is our way of honoring him and every brave American who has fought for our country – it’s our way of remembering that our safety and freedom has been built and protected by generations of selfless servicemen and women,” said Mark Hellendrung, President of Narragansett Beer. The warship is still docked at Fall River’s Battleship Cove today. Big Mamie Indestructible American Pale Ale is made with U.S. Pale, Cara Belge, Vienna and Special B malts, which are balanced with U.S. Chinook hops. The ale is dry hopped for a “crisp, bright taste” with 4.5-percent ABV.