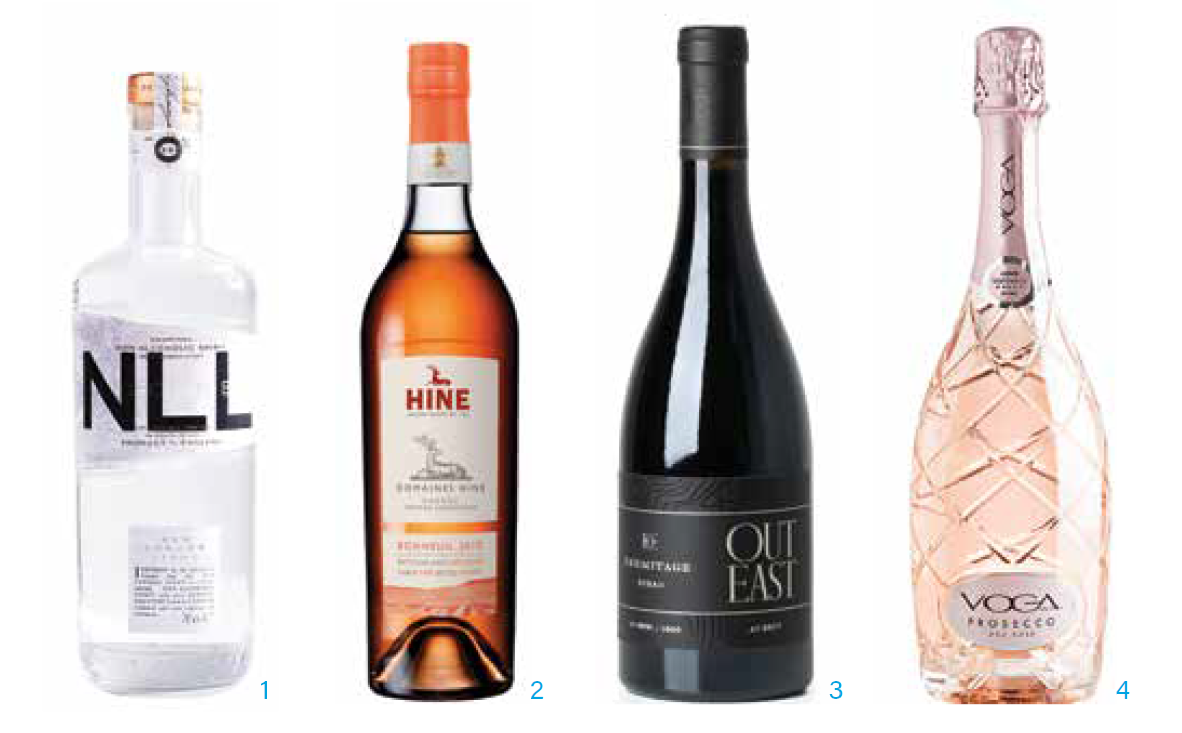 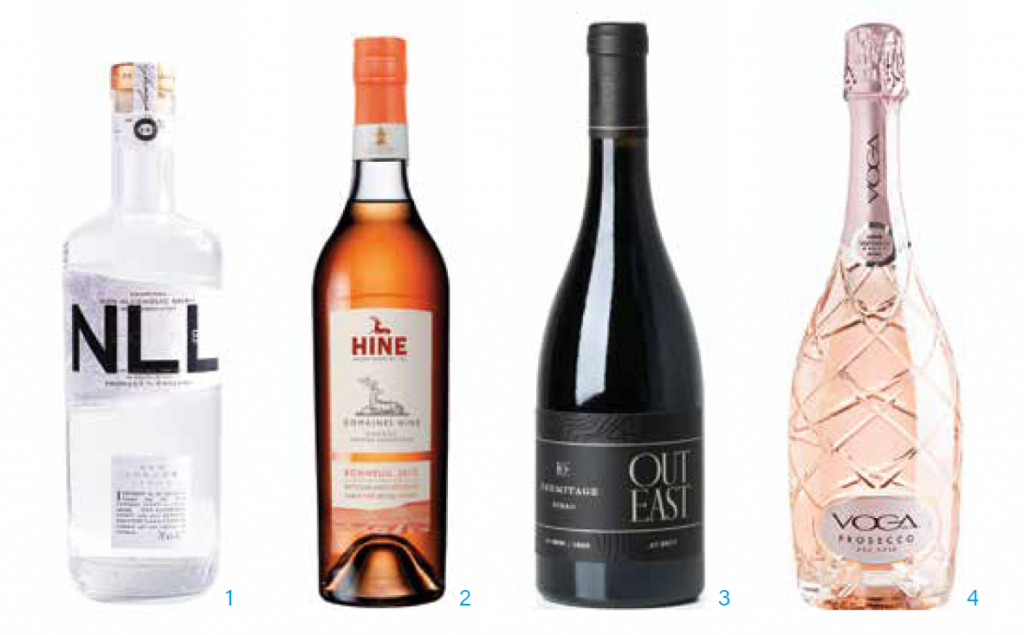 3. Out East 2017 Hermitage
The first ever Hermitage wine to be released by an American company (let alone one owned and run by women), Out East’s 2017 was produced in collaboration with Rhône producer Cave de Tain. Out East is aiming to modernize the Hermitage category, known for firm intense, age-worthy Syrah-based wines. Out East 2017 Hermitage shows classic aromas and flavors of gamey meat, spice, leather, coffee, and black currant. 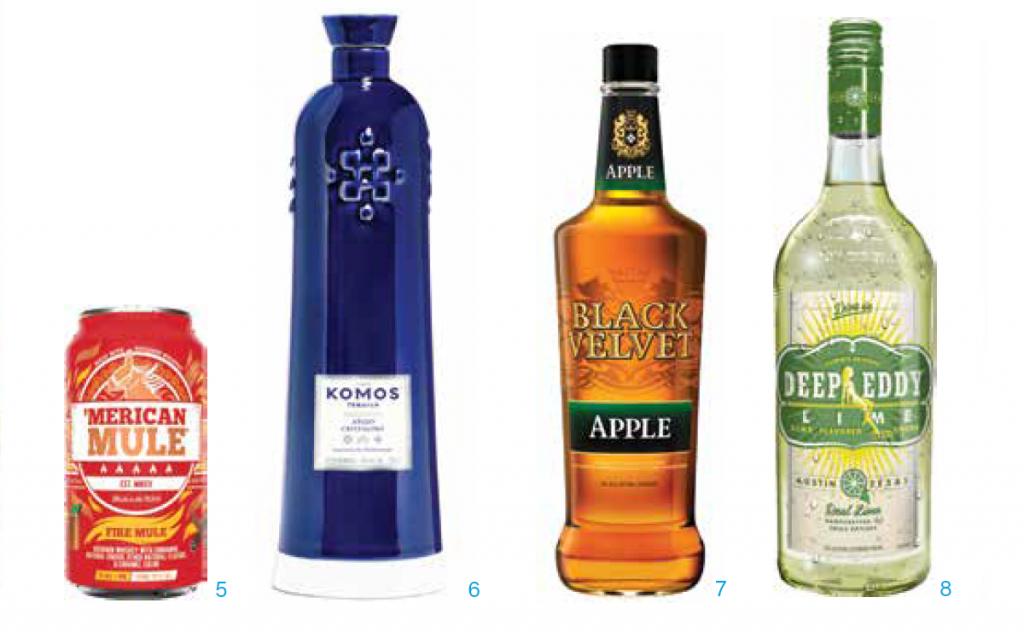 6. Tequila Komos
Tequila Komos is an ultra-premium añejo cristalino tequila from Richard Betts (creator of Sombra Mezcal and Astral Tequila). Tapping into European winemaking techniques, Komos is aged in French oak white wine barrels (instead of bourbon) and stored in amphorae after a careful purification process leaves it crystal clear and extremely smooth. The result is flavorful but delicate; best chilled or with a splash of sparkling water. Clay bottles glazed in vivid blue nod toward the Mediterranean.

7. Black Velvet Apple
The question of what flavors work in whiskey continues to be tested. Black Velvet Apple is betting that apple’s appeal extends well beyond fall. It joins Black Velvet Original, Reserve, and Toasted Caramel, offering sweettart green apple flavor and a warm whisky finish. Black Velvet launched in 1951 and has grown to become the second largest Canadian whisky in the world. The brand was originally set to be known as “Black Label,” but the inaugural distiller changed the name after he sampled the first batch. 70 proof.

8. Deep Eddy Lime Vodka
While not the most famous Texas vodka, Deep Eddy has carried the Lone Star iflag proudly and has specialized in authentic flavored vodkas. Flavor development for the brand has entered a new era thanks to the original Deep Eddy production facility in Dripping Springs having been converted into a tasting room—and testing ground for new flavors. Lime has emerged, following in the citrusy footsteps of popular Lemon. 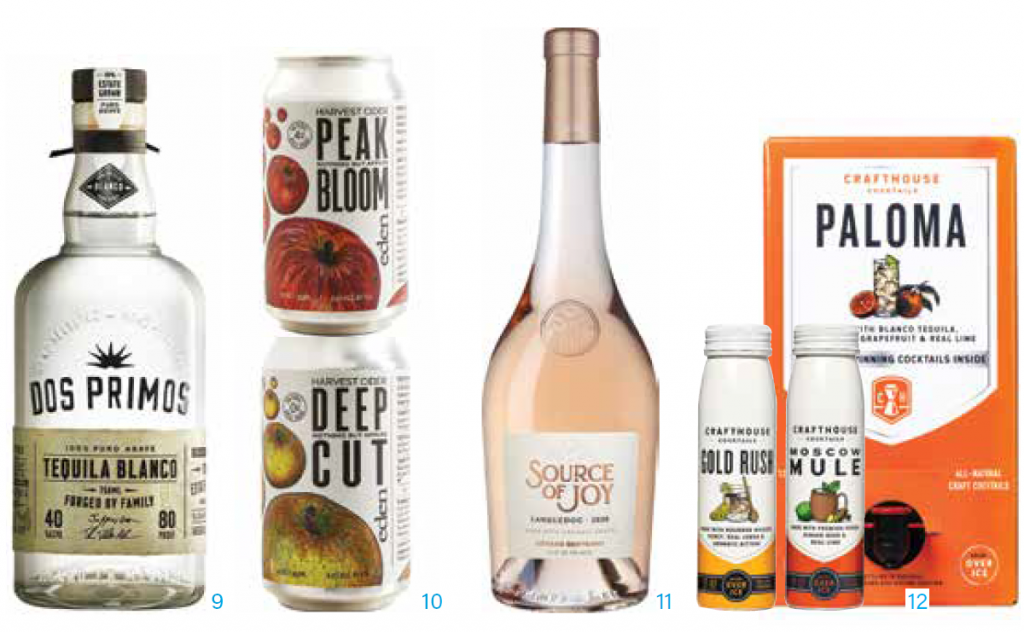 10. Eden Ciders
Eden’s Harvest Cider, in 12oz cans, are produced once per year at harvest when the fruit has all its flavor, using 100 percent local (Vermont) apples and no added sweeteners or preservatives. The apple varieties are listed right on the can. Peak Bloom, made from five varieties, shows lush apple fruit balanced by light tannin and soft, lingering tartness. Deep Cut is made from six types of apple and shows great acid tannin balance and notes of peach, black tea, and citrus. Both are 6.2% ABV.

11. Source of Joy Rosé
New from Gérard Bertrand, first major French rosé of the 2020 vintage is arriving stateside and making another powerful statement both about both organic wine and Languedoc. Stamped with an image of a rising spring—a nod to Bertrand’s natureforward approach—Source of Joy is a blend of Grenache, Syrah, and Cinsault. It offers raspberry fruit, floral tones, and medium full body, accented by a touch of oak that adds structure to the ample fruit character.

12. Crafthouse RTD Cocktails
Originally launched in 2013, renowned bartender Charles Joly’s all natural, small batch Crafthouse Cocktails are now available in seven flavors and multiple formats. In addition to 200ml slim cans and 750ml bottles with swingtop closure, the brand also offers its Moscow Mule and Spicy Margarita in a 1.75L box. Joly has the distinction of being the only American to have won Diageo World Class Bartender of the Year. Gluten free; 10.1% 24.6% ABV.