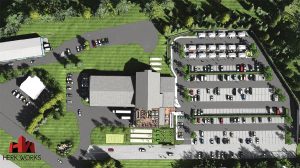 Newport Craft Brewing & Distilling Co.’s rendering of a new production space and a state-of-the-art modern rooftop event space, overlooking the City of Newport, Newport Harbor and the Newport Bridge. The new facility will host private parties, weddings, corporate and other events of up to 350 people from its new taproom, outdoor entertaining areas and a beer garden, with more than 200 parking spaces on the property.