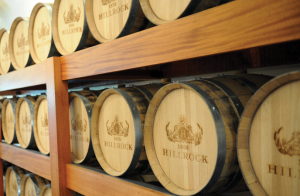 the past decade has taught us anything, it’s that consumers have a taste for whisky that’s not likely to disappear any time soon. Overall U.S. volume has settled into a stable pattern of year-on-year growth in the mid-to-high single digits; volume was up more than 4% and revenue was up 6.4% last year, according to the Distilled Spirits Council.

Most of the volume is still coming from countries that have historically been linked with whisky production, but distillers from non-traditional nations whose spirits have been coming into their own—“New World” whiskies, if you will—are banking on drinker curiosity and palate promiscuity to gain a foothold in the market.

But are American whisk(e)y consumers ready to be wooed by brands from off the beaten path? Mark Gillespie, noted whisky expert and host of the popular podcast, WhiskyCast, thinks so. “Look at where American tastes are with wine: we drink Australian wine, we drink New Zealand wine, we drink wines from all over the world here,” Gillespie reasons. “I don’t think people are going to be parochial about drinking whiskey from a country that’s not traditional…Americans are more willing to experiment with whiskies from around the world.”

There are a number of regions of the world that have been gaining a great deal of attention of late.

It seems odd to be including the U.S. among “world whiskies,” but it really is where the current whiskey renaissance began.” Barely two decades ago bourbon, Tennessee and rye whiskey were not the exalted spirits they are today—they were considered your grandparents’ drinks. 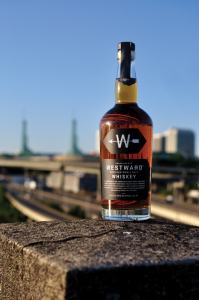 In fact, North American whiskies (including Canadian), declined steadily for 30 years, from 1970 to 2000, before they bottomed out, according to the Distilled Spirits Council. Last year alone, American whiskey volume (including Tennessee, bourbon and rye) grew nearly 7%—and the super-premium tier of the category grew nearly 12%. The rest of the world has embraced American whiskey as well; category exports grew more than 10% in 2016—and have nearly doubled since 2006—according to the Council.

Bourbon has been the major juggernaut among American-produced spirits, but rye has started to steal some of its spotlight. Last year, U.S. rye volume grew 17% off a still-modest base to 785,000 cases. It could pass the million-case mark this year or next.

And smaller, independent brands have become household names among aficionados. Middlebury, VT’s WhistlePig is among the key players among those. The brand had been sourcing its whiskey from Canada, but this year WhistlePig launched Farmstock, the first expression that incorporates rye grown on its own farm. Virginia’s Catoctin Creek gained such a following for its Roundstone Rye, that Constellation Brands earlier this year bought a minority stake in the company. What’s more, small distillers are embracing a sense of place; to wit, Sagamore Spirit uses spring water from a Maryland limestone aquifer, but distills award-winning ryes in downtown Baltimore.

Beyond single malts, experimentation is thriving among whiskey producers. One bright example is the Catskill Distilling Company, in Bethel, NY, across the street from where the original Woodstock festival took place in 1969. All of the grains, fruit and botanicals that make up Catskill’s spirits are grown right on the farm or sourced locally—including buckwheat, a rare but distinctive base grain for whiskey. Equine vet turned distiller Monte Sachs has also developed a unique “accelerated aging” process; specially designed, heat-cycling warehouses imitate seasonal changes, but at a faster rate. 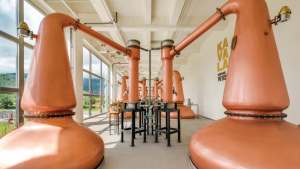 Kavalan has earned multiple awards at various international whisky competitions while only beginning exporting in 2012.

American whiskey may have kickstarted the worldwide renaissance, but it was Japan that really helped open the floodgates for products from countries that had very little presence on the global stage, whisky-wise.

Japan’s whisky industry, as we know it, began more than 90 years ago when Masataka Taketsuru studied distilling in Scotland. He returned to Japan (with his new Scottish wife, Rita Cowan), where he applied his new skill set. He was the first Master Distiller for what would become Suntory (and ultimately Beam Suntory). Suntory made a name for itself not only as the distiller of its namesake brand, but also with Hibiki blended whiskies and the Yamazaki line of single malts. Three years ago when Jim Murray’s Whisky Bible crowned the 2013 Yamazaki Sherry Cask expression as the world’s best whisky. Suntory and other Japanese producers couldn’t buy better publicity for their whiskies.

Taketsuru is directly responsible for another well regarded whisky brand. After leaving Yamazaki, he founded what would become Nikka Whisky Distilling Co. “If you look at Nikka from Japan, accounts can’t keep it in stock,” Gillespie says.

Amrut was the first Indian single malt on the market, launched in 2004 (though Amrut Distilleries has been around since the 1940s). The distillery produces a flagship 92-proof single malt, as well as peated and cask-strength versions and a host of limited edition expressions including a rye. Amrut paved the way for a viable single malt market in India and now it and others that followed have been garnering accolades worldwide.

Another brand that’s been making a substantial play for the U.S. market is Paul John, from John Distilleries, a 25-year-old company that launched its first single malt in 2009. It had been making Original Choice Whisky (actually molasses-based and now packed in Tetra-Pak cartons) for 17 years before it released Paul John Single Malt.

The growth of India’s middle class brought more disposable income to consumers and enabled a high-end whisky segment to emerge. “The game has changed with regard to how Indians perceive single malts,” says Ajay Bhoja, who has headed up Paul John’s U.S. market efforts. “With the U.S. market, it’s been a pretty good challenge to get people to understand that there are single malts that are not only coming out of India, but that India is producing high-quality spirits. It’s all education-based.”

“After we won a lot of awards in some international competitions, people [whisky drinkers] started to notice us,” says Nico Liu, Brand Ambassador for Kavalan. “There are more and more curious and open-minded drinkers today and it offers a huge opportunity, especially for newer whisky nations.”

Gillespie says Japanese distillers really helped open the door for other Asian whisky-producing countries, and he believes Kavalan and some of the Indian brands can replicate Japan’s success.

Australia’s craft whisky distilling industry actually developed ahead of that in the U.S. The first on the scene was Lark Distilling in 1992, which founder Bill Lark opened in Tasmania after he lobbied the government to lift a distilling ban that had been in place since 1838. Other internationally renowned and award-whisky-makers soon followed—a disproportionate number in Tasmania—including Sullivan’s Cove, Overeem and Heartwood.

There’s been a bit of a whisky renaissance happening in New Zealand as well, with producers like Thomson Whisky, opened in 2010, and Cardrona, opened in 2015, starting to make a name for them for themselves in the whisky space. Most distilling activity had laid dormant after the Willowbank distillery (once the world’s southern-most distillery), founded in 1974, shuttered in 1997. The antipodean producers’ remoteness is part of the reason for their spirits’ lack of presence in the U.S.

Anchor Distilling Company is bringing to the U.S. some of the nation’s rarest and oldest: expressions produced between 1987 and 1994 at the Willowbank distillery. The New Zealand Whisky Collection comprises 443 barrels worth of whisky, produced using traditional Scottish methods of copper pot stills, which had been mothballed at the end of the 20th century. Four expressions are coming to the U.S. this fall, including Dunedin DoubleCask 16 Year Old (80 proof, SRP $85/375ml) and South Island 25 Year Old (80 proof, $230/375ml). 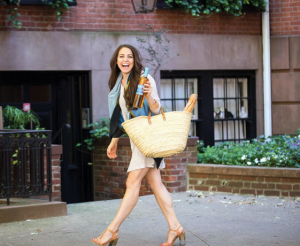 American Allison Parc developed Brenne Single Malt Whisky with a distiller based in France’s Cognac region; its style is fruit-forward with complex-sugar notes, like crème brûlée, and warm spices like cinnamon and clove.

A brand that’s been helping put French single malts on the map in the U.S. has been Brenne, launched about five years ago by American entrepreneur Allison Parc. She partnered with a distillery in Cognac to produce the product, now available in two expressions: the original Brenne Estate Cask and Brenne Ten.

“Brenne has created a market for French single malts and the French have been distilling just as long as the Scots and Irish,” Gillespie notes. “They just had been doing it with brandy, but they can make really good whisky.”

In fact, French consumers typically drink more whisky—predominantly Scotch—than Cognac, as most of the latter’s consumption is for export markets.

The continental European whisky wave doesn’t end in France. The industry should be keeping an eye on what’s happening in places like the Netherlands, Italy and Scandinavia as well.  “The Swedes are doing really good stuff, but they’re just not producing enough of it,” Gillespie notes. “And the Dutch were distilling rye long before the grain came to America from Europe.”

Sheer novelty is enough to get most whisky consumers to try a product from a New World producer. But is it enough to drive any sort of sustainable sales? “Once they’re exposed to it and they see they’re just as good, if not better than a lot of Scotch whiskies or bourbons, they’re going to go nuts with the stuff,” Gillespie reasons.

Importers, he says, are really going to have to work with distributors and get as many tastings out in the public as they can, through both on- and off-premise promotions.

“It’s easy to sell the first bottle,” Gillespie says. “But most of these are good enough that they’ll be able to sell that second or third bottle.”