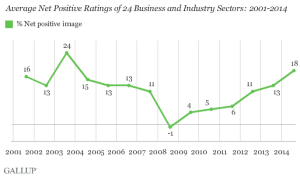 The restaurant industry is regarded as the top business sector in America according to the results of the annual Gallup Work and Education poll released in September 2014. Restaurants have remained one of the “most highly viewed industries” since Gallup started its annual poll of consumer perception of industries in 2001, re-claiming the top spot last held in 2007. In addition, this year’s poll recorded the most positive rating on record for the industry.

“Restaurants are the beloved cornerstones of communities across the country,” said Dawn Sweeney, President and CEO of the National Restaurant Association. “From the local sandwich shop to the city steakhouse, the restaurant industry provides job opportunity to 13.5 million Americans and has become an essential part of our everyday lives.”

According to National Restaurant Association research nine in 10 consumers say they enjoy going to restaurants and two in five consumers say restaurants are an essential part of their lifestyle. One half of all adults have worked in the restaurant industry at some point during their lives and one third of all Americans got their first job working in a restaurant.

As the nation’s second largest private sector employer, restaurants continue to be economic drivers, employing nearly 10 percent of America’s workforce. In addition, more than nine out of 10 restaurants are actively involved in charitable activities. Collectively, the charitable contributions of the nation’s nearly one million restaurants are estimated to reach up to $3 billion each year. The Gallup poll asks Americans to rate industries on a scale from “very positive” to “very negative.” The computer industry is second to restaurants.