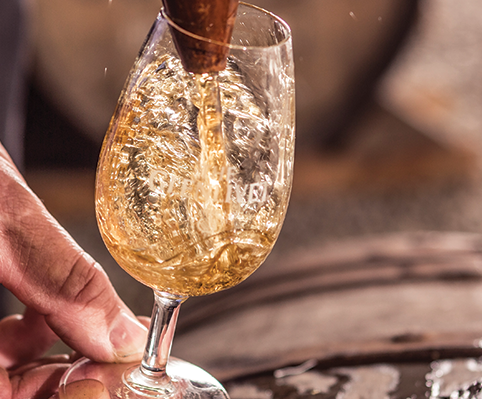 Ask most people in the Scotch whisky business for their opinion about American whiskey innovation, and you’re likely to get a bit of a “Been there, done that” in response.

It’s not that the changes in American whiskey don’t impress or encourage Scotch single malt producers—distillers are an affable clan of mutual admirers, and they are generally pleased that, with whiskey boundaries being broken at all levels. It’s just that perhaps the “new” whiskies are not so novel.

“We’re extremely excited about the innovation taking place across the category and the impact that has on how consumers and trade perceive single malt Scotch,” says Patrick Caulfield, Brand Director, The Glenlivet. “Innovation is driving 50% of total category growth.”

“This is a great time to be a whiskey drinker—there are tons of innovations, and in order to stay relevant as a brand and to keep people interested in you in the total whiskey category which is cluttered with new things, the expectation from the consumer and the trade is you almost have to be bringing out new releases,” says Michael Giardina, Brand Marketing Director for Glenfiddich. “If you’re not innovating in the category today you’re probably going to fall behind.”

Rather than argue their place in spirits as innovation pioneers, established Scottish distillers are rising to the challenge, and embracing it as a chance to expand their reach. As Caulfield notes, the current market “represents a huge opportunity for The Glenlivet to forge unique and meaningful connections with an increasingly diverse mix of consumers.”

Glenmorangie is classic brand adjusting their portfolio and packaging to stretch their appeal to a new generation of whiskey drinkers without losing current fans.

Single malt producers have a right to feel that they’ve been waiting for the world to catch up to their whiskey tweaks. Barrel finishes? Glenmorangie broke that barrier as a successful commercial concept almost 30 years ago. Smaller barrels? Laphroaig Quarter Cask has become a steady performer. Barrel-proof? Countless limited time offerings from distillers including Glenlivet, Ardbeg, Aberlour and many others. Unusual ingredients? Back to Glenmorangie and their Signet, made with dark chocolate malt.

Still, the whiskey renaissance here continues to recruit new consumers, and it pushed producers to try new things, says Stephanie Jacoby, Vice President of Scotch, Diageo North America: “This new generation of whisky drinkers is branching out across brands and taste profiles, inspiring Scotch brands to offer products that do not conform to the traditional look and feel of the category.”

Classically, whiskey consumers tended to stay in their lanes, with some bourbon drinkers eventually migrating to single malts. But the new whiskey drinker is considered promiscuous and open, and that has opened the doors earlier for malts. “While North American whiskey continues to grow and provide a challenge for Scotch, we see that many of the new Scotch offerings that don’t have the traditional look and are attracting a new generation of drinkers,” says Jacoby.

Consumers, parched for new ways to sip their drams, will continue to push for new flavor twists, most agree. Says Sam Leotta, Brand Director Americas for The Macallan, “The unprecedented increased demand for single malts is something the entire industry has been facing, which has in turn driven a new age of innovation for all producers. Moving forward, the industry will have to continue to innovate, while also recruiting new consumers into the category and the brands.”

But Dr. Bill Lumsden, Glenmorangie’s Director of Distilling, believes there are limits: “There are only so many things we can do and still legally call ourselves Scotch malt whiskey. Because of that, ourselves, William Grant, Diageo and others have probably already done it or are in the process of doing it. But I will continue to push the boundaries as far as I can.” That means innovations like last year’s rye cask-finished Glenmorangie Spios (Scots Gaelic for spicy), the ninth release in the Private Edition range.

For The Glenlivet, experimentation includes the Nàdurra Peated Whisky Cask Finish and Founder’s Reserve, which Caulfield says has been the best performing innovation within the category in the U.S. in the last three years. Recently they also launched The Glenlivet CODE, with no cask information or tasting notes, challenging customers to “Unlock the Taste” through a digital experience.

Diageo has turned its attention to one of its less well-known malts, Mortlach, with three new editions released this summer—Mortlach 12-Year-Old, 16-Year-Old and 20-Year-Old. And this fall we will see Diageo’s annual Special Releases collection, composed of ten rare single malts.

The Macallan expressions have proliferated to the point of deserving a scorecard—Sherry oak, double cask, triple cask matured, and other limited lines. Even when sold out, the prestige associated with such limited editions adds to The Macallan’s reputation.

The Macallan expressions have proliferated to the point of deserving a scorecard—Sherry oak, double cask, triple cask matured, and other limited lines.

This search for the new and the different also benefits brands not recently among the top performers in the U.S.—Glenfarclas, BenRiach and Glenglassaugh, now owned by Brown-Forman, are expected to be seen more now that the owner’s distribution capabilities are employed.

Rachel Barrie, Whisky Maker for BenRiach, The GlenDronach and Glenglassaugh, says playing with peat, casks, age and maturation methods is now de rigueur, especially for new consumers. “The consumer wants to know more and seeks out more interesting products, and it appears to me there is a quest for flavor more than ever before,” she says. With peated and non-peated ranges, a collection of barrel finishes as well as a limited triple-distilled variant, BenRiach especially seems poised to emerge with a reputation for something Barrie calls “maltology, typically described as a the ways whiskey gathers tastes that are greater than the sum of the parts.”

The whisky tide has lifted some of Scotland’s newer distilleries, such as Isle of Arran Distillers, opened in 1995 as the only whisky producer on the island. Last century’s vision is now yielding dividends, in the form of a classic 10 Years Old, a new 18 Years Old, plus the official Robert Burns whiskies, which tap into the legendary national poet of Scotland, whose birthday is now recognized as a reason to celebrate the Scotch culture worldwide every January.

Bunnahabhain is among those distillers adding new expressions while also retooling their classic age statement bottling.

Reports on how non-age statements are being accepted are mixed—it’s an innovation forced by success, the by-product of distillers proactively taking pressure off short stocks of aged whisky. As Lumsden says, the more they are tasted, the better the market understands the concept, but still, no single variant has broken out, Giardina says: “Age still holds a lot of importance in this market. Most top sellers are age statement whiskies.”

Glenfiddich has managed their age statement core range with a twist; the 21 Year Old is also labeled Rum Cask, while the 15 is the Solera. Sort of like killing two marketing birds with each expression. They’ve also created their Experimental Range, just joined by Fire & Cane, a mix of peated and unpeated whiskies finished in rum casks. Stablemate The Balvenie has seen growing popularity for its Caribbean Cask 14 Year Old, and recently introduced a second vintage of its The Balvenie Peat Week 14 Year Old. The Dalmore has developed a potent mix of Age Statement and Non-Age-Statements; for instance, this year The Dalmore Portwood Reserve joined the likes of the sextuple-wood King Alexander III and 18 Year Old.

Caulfield, like Lumsford and Jacoby, also credits the cocktail renaissance for finally developing a taste for malts, introducing even more new drinkers to its particular flavors. Not only are drinkers in general giving malts a try earlier than in the past, but more women seem to be gravitating to Scotch, say many marketers.

Two issues are of significant importance: stocks are limited and, as Lumsden points out, if China continues to develop a taste for malt and if India relaxes tariffs, the pressure on supply will be vastly increased.

Meanwhile, amid the steady hum of innovation, distillers will need to keep an eye on their hard-fought reputation for high-quality whisky. “Innovation is certainly a way to spur interest and recruit new drinkers to the brand, however I’d argue that it’s still more important to maintain the quality and handcrafted character our fans have come to expect,” says Giardina.