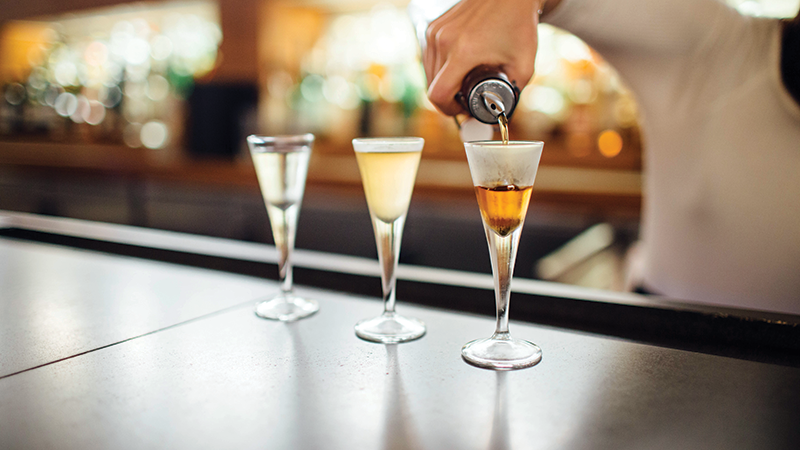 The restaurant Aquavit in Manhattan infuses aquavit with elements ranging from blueberry to spruce to horseradish.

Aquavit Is Enjoying A Boost From Interest In Scandinavia And Botanicals

Aquavit, from the Latin aqua vitae, is the Nordic countries’ native spirit, and like so many Nordic things—hygge, Nordic cuisine, girls with dragon tattoos—it’s becoming increasingly popular across the U.S.

Gin is probably aquavit’s closest relative. Both are clear liquors, but the core flavors are different; aquavit (or akvavit, as it’s sometime spelled) favors licorice and caraway in place of gin’s juniper. Dill is also a common flavoring, and other elements like cardamom or citrus are also possible. Grains or potatoes provide the base distillate. Essentially a clear liquor, some producers indulge in a small amount of barrel aging. Perhaps most famously, Linie, a Norwegian aquavit, is noted for a smooth character gained by time spent at sea: each batch is aged in Sherry casks in the hold of a ship, crossing the equator twice during its aging process.

More and more brands are finding their way to the U.S.; in 2016, Sazerac started importing the caraway-forward Denmark’s Aalborg Taffel as well as Linie. Other “national brands” like Sweden’s O.P. Andersen and Iceland’s Brennivín are also imported.

U.S. craft distillers have also embraced the spirit. In Oregon, House Spirits began making an aquavit in 2006. Distribution changes had made imported examples hard to find that year, and owner Christian Krogstad’s Norwegian background could not bear a holiday season without aquavit. The resulting Krogstad Aquavit has a unique anise character thanks to the use of Vietnamese star anise rather than the more usual aniseed or fennel. Initially a niche product for them, production of ten cases that year has expanded to about 2,000 cases in 2017.

Christian Krogstad was originally inspired to make aquavit at his House Spirits distillery in Oregon because he could not find any imported from his native Norway. Production grew from ten cases in 2006 to 2,000 cases today.

The rise of Nordic cuisine has created a natural opening for aquavit. Krogstad says “Game, oily fishes like mackerel, pickled herring, any sort of cod,” all pair well with aquavit. “The caraway is very cleansing, so it works very well with fish oils that you get in a lot Nordic cuisine, the strong flavors.”

At the restaurant Aquavit in New York City, Beverage Director Chris Clark and his team riff on aquavit’s traditional, savory flavors and take them far afield, infusing elements ranging from horseradish to blueberry to spruce in-house. Clark says offering more than 30 varieties of aquavit allows them to pair the spirit more widely with their menu.

Back home in Scandinavia, diners often enjoy throughout the meal, consumed in small, chilled shots alongside beer. But in New York, “We give it a more aperitivo style of presentation, so we look at the cucumber, the horseradish at the start, the more refreshing, palate-cleansing ones. If the guests want to dive deeper into aquavit we make some fruit-based ones that work,” all the way to dessert, says Clark. Serving it chilled is important, restraining the alcohol that often makes spirits difficult to pair with food.

Away from the dining room, the cocktail crowd has also embraced aquavit, one of the few, newer additions to the cocktail repertoire that can serve as a base spirit. “Both Linie and Aalborg are excellent substitutes for the base ingredient in cocktails like in a Mule or Bloody Mary,” says Amber McGrogan, Sazerac Marketing Manager.

“The cocktail thing was a big surprise,” says Krogstad. “For the first year or so I was concentrating on the traditional uses of aquavit: small, chilled glasses with food. Then some of the bartenders got a hold of it. The biggest surprise was how well aquavit works in Tiki drinks. There’s a whole trend of Viking Tiki now.” In this context aquavit can serve as a base spirit, or as a component in drinks with a more usual rum base.

Martin Cate, owner of Smuggler’s Cove and Whitechapel in San Francisco, was one of the first to explore this combination, creating cocktails like the Norwegian Paralysis. “Much like gin, the savory qualities of aquavit have a transformative effect on the rest of the ingredients,” says Cate. “The savory qualities are really interesting when mixed with tropical juices and other classic exotic cocktail ingredients. Pineapple juice, orgeat and coconut cream all respond really well to it.”  Cate notes that it’s important to use the right aquavit, as a small change in the savory spices can create “discordant flavors.”

Served neat, Clark says Linie makes a great introduction: “It has the fennel, the anise and the caraway, and it has a little bit more roundness to it; the alcohol is a bit more hidden than some of the other ones which come off a bit hotter.” He also cautions that bars using an aquavit in cocktails sometimes don’t keep it chilled, so novice drinkers may get a stronger burn from the spirit than they ought to. Served properly, whether neat or in a cocktail, it offers some great new flavors for customers. “Why go bland, why go neutral?” reasons Clark. “Why not go richer, or savory, or herbaceous, or whatever it is you’re looking for.”