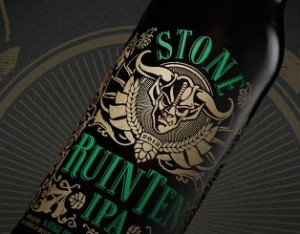 “We brewed this beer using the same ingredients as in Stone Ruination IPA, but we jacked up the hops – not just in the boil, but we doubled the dry-hop amount, using a 50/50 blend of Centennial and Citra,” explained Stone Brewmaster Mitch Steele. “We also bumped up the malt to achieve its elevated ABV. The combination is obscene. It’s absurd. It’s crazy.”