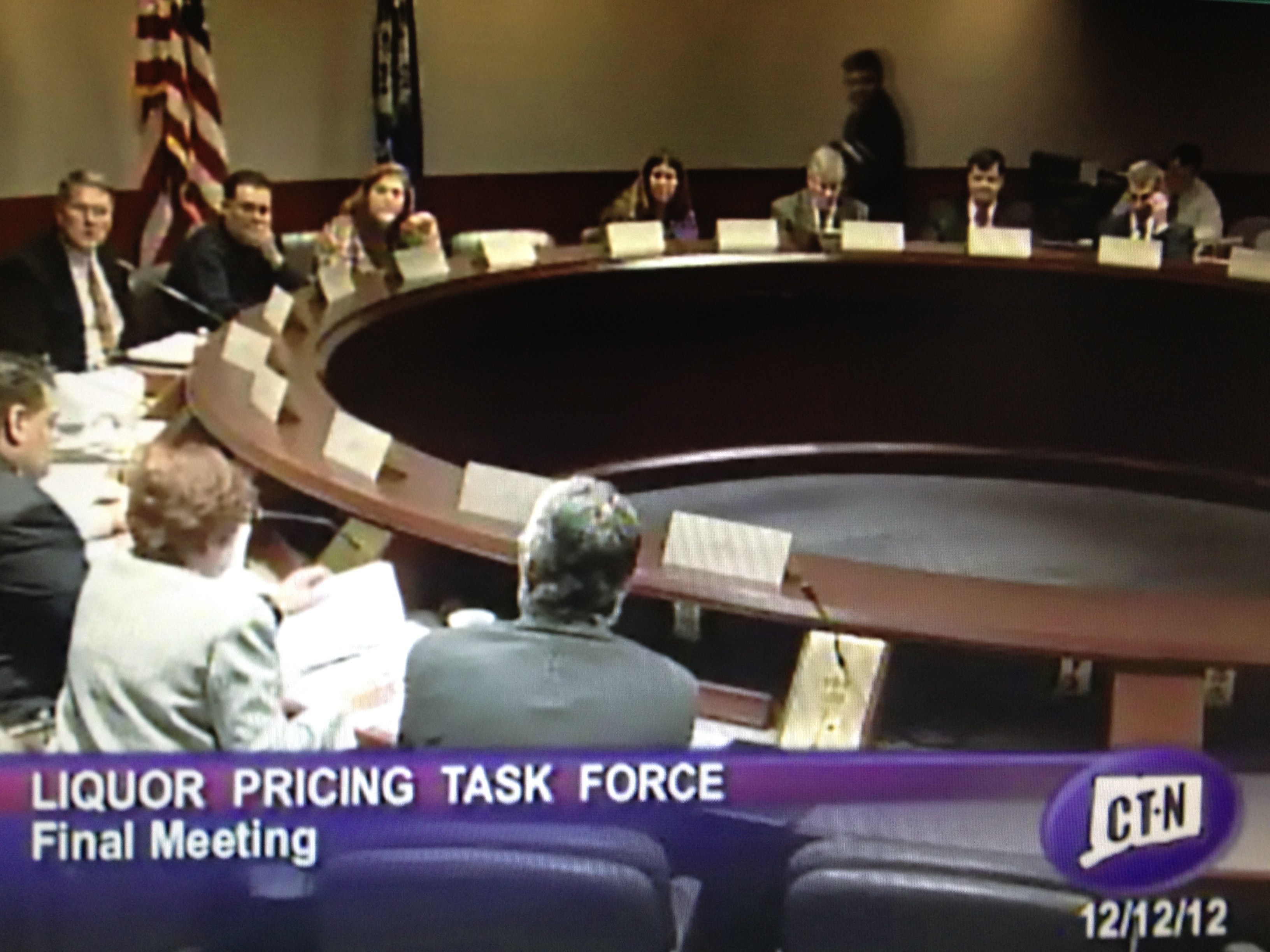 It’s up to the Legislators now. The Competitive Alcoholic Liquor Pricing Task Force has officially disbanded, having completed its research and handing a 17-page report to the General Assembly.
All 15 members were present for the Task Force’s final meeting on Dec. 12, where they wrapped up seven months of research and debate by approving their final report, written by the Office of Legislative Research (OLR).

The report contains no suggestions or opinions. It is simply a compilation of research and summary of facts. However, it includes an appendix containing written comments from individual task force members, and an appendix of documents submitted at the September 12 Task Force hearing, at which industry members spoke. The report, written by OLR legal analyst Duke Chen, is a

boiled-down version of Task Force Member and University of Connecticut economist Stanley McMillen’s report. At their Nov. 14 meeting, the Task Force had agreed to gather all data and studies—essentially everything they had done since May— and hand it off to OLR. Chen issued his report in mid-December; it was approved by the Task Force members and submitted to the General Assembly on Dec. 21.

The Task Force then disbanded. Neither co-chair—outgoing Rep. Kathy Tallarita nor Ed Berthiuame—returned calls to The Beverage Journal as of press time. Thus concludes seven months of research and meetings by the Task Force. In May 2012, Connecticut Gov. Dannel P. Malloy (D) gave them the hefty assignment to examine, review and analyze four major topics: Connecticut alcoholic liquor taxes, quantity and volume discounts, existing liquor permit restrictions, and minimum pricing and price posting. They were also asked to look at alcohol law in other states and note the impact on consumers and industry stakeholders. The report is available on the Task Force’s Web site, but the appendix is not posted. While all the Task Force members agreed on the report itself, they debated what to include in the appendix at their final meeting. 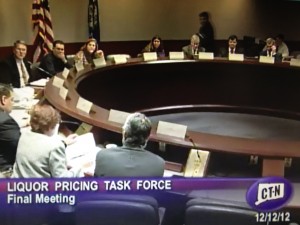 According to the final meeting minutes, Rep. Rosa Rebimbas said she was “not okay” with the comments in the appendix and suggested that the Task Force remove them. Tallarita countered that it is incumbent on the task force to make sure all available documents on file with the Task Force were given to the General Law Committee. Kevin Sullivan. Department of Revenue Commissioner (DRC), agreed with Tallarita that including the members’ comments in the appendix is appropriate because it gives readers “a flavor” of the members’ views, according to the minutes.

Rebimbas rebutted that the report alone is sufficient. She said the Task Force should leave out personal comments and list only documents received to date. Sullivan countered that it seemed the Task Force was debating how much not to submit to the General Assembly.

Finally, Department of Consumer Protection Commissioner William Rubenstein moved to accept the Task Force report as drafted and 1) to include a list of all documents considered by the committee in the appendix, 2) permit panel members to submit their comments to the clerk by the close of Dec. 19, and 3) to submit the report to the general assembly on Dec. 21. He was seconded by Rep. Mary Fritz. He later clarified his motion to say: materials submitted late will not be included and the appendix should include a list of all documents received and considered by the Task Force. The motion was passed on a roll-call vote.

“I think the Task Force uncovered a lot of useful information here for the Legislature,” McMillen told The Connecticut Beverage Journal after the OLR report was approved. “I would say what we did is collect a lot of information that was spread all over the place and put it in one place where the Legislature can look at it.” The report effectively compares and contrasts Connecticut alcohol laws and taxes with those of Massachusetts, New York and Rhode Island. The report says the four states all “have some basic similarities in the way each regulates alcohol.” Statements include:

Key findings in the report include:

“There are several things I’d like to see changed, personally,” McMillen said. “The main issue for me is the permitting. It’s very difficult to navigate and comply with the very complicated permitting issues in Connecticut. We need to make Connecticut a more competitive place to do business.”

“My hope is for the Legislature to look at that 2004 report by the Legislative Program Review and Investigations Committee,” he said. “They studied Connecticut’s alcohol permitting system and concluded that the system is too complex and should be simplified. The Legislature took up that report eight years ago, but it never went anyway. I would suggest they start there,”

Carroll J. Hughes, longtime package store lobbyist and head of the Connecticut Package Store Association said of the report, “It’s very interesting information, and we’ve known most of it for a long time, it’s just that now it’s made available to the people.”

“All states heavily regulate the alcohol industry in different ways for different purposes. But it’s very clear that the control states have major advantages over license states. Specifically because they control the taxing structure,” he said. As for the upcoming legislative session, Hughes said, “I’m not going to predict anything at this point. We respond to whatever is out there when decisions are made. The report is what it is. Everybody is going to draw their own conclusions. We’ll look forward to working with the General Law Committee as usual.”

McMillen acknowledged that this particular legislative session is not only short, but jam-packed with hard-pressing issues, such as the state deficit, fiscal cliff issues and gun legislation.
In early January, Malloy set a two-month deadline for a commission to address the state’s gun laws, mental health policies and public security issues. He sanctioned a special advisory commission and set a March 15 deadline for an initial report that is expected to be addressed during the next legislative session.

This comes as the state faces a deficit of $40 million, according to Comptroller Kevin Lembo. That number reflects cuts that were made in December, after state officials had revealed a $365 million deficit, according to the Associated Press. Last month, Malloy had ordered $170 million in spending cuts, and further cuts were approved in a law signed by the governor last month. “The state is facing major issues here. While I’d like to see the alcoholic issues taken up, the focus will be fiscal health,” McMillen said. “The economy and the fiscal cliff are truly the overarching issues that Connecticut is facing.”