In an effort to help connoisseurs of vintage liquors stock up their “home bar” this Christmas, Old Liquors, located in Breda, The Netherlands, put together the following “Top 10 List” of the world’s most expensive liquors: 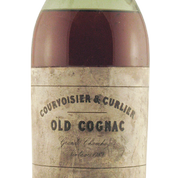 10. Cognac from vintage 1811 – starting from $7,896.84: If there is one thing wine and spirits critics agree on, it’s that there is no greater quality vintage than 1811, pronounced as the Comet Vintage. During this year the Great Comet was visible in the sky for 260 days. The Comet was responsible for a long, hot summer and a warm dry winter and the harvest reached an “unequalled level of perfection.”

8. Cognac Hennessy Silver Jubilee – $19,339: This bottle commemorated the Queen of England’s Silver Jubilee in 1977. Only 60 bottles were ever made and the cognac consists of a blend of at least a hundred year old cognacs.

7. Cognac A.E. DOR Soleil d’Austerlitz, vintage 1805 – $28,857: Do not be fooled by this relatively unknown brand. According to many vintage liquor connoisseurs, this small château produces some of the world’s best cognac available. Only three bottles were ever sold of this cognac.

6. Cognac Courvoisier Erté Collection 1 to 8 – $48,187: The bottles of the Erté Collection were designed by Russian deco-artist Erté and contain an extraordinary blend of precious Grande Champagne cognacs from the well-known château Courvoisier, considered one of the largest producers of cognac. Only 12.000 bottles were made of numbers 1 to 7. Courvoisier finally released a 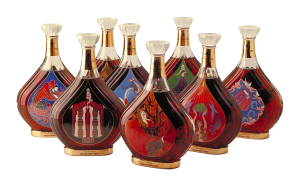 limited edition to commemorate the death of Erté in 1990, number 8, of which only 4.000 bottles were made. Each of the bottles’ design represents a different facet of the cognac making process.

3. Cognac Courvoisier & Curlier, vintage 1789 – $153,000: Distilled in the same year as the Storming of the Bastille, this hand-blown bottle is the oldest vintage from Courvoisier. It is so rare that even the château does not own a bottle, as it was recently discovered as the oldest vintage from the famous French cognac brand in the cellars of Dutch collector Bay van der Bunt. During the Christmas Holidays, this cognac will exclusively be on display at Harrods, London.

1. Cognac Brugerolle, vintage 1795 -$222,400: This six-liter cognac bottle was a favorite of French revolutionary officers and travelled with the army of Napoléon Bonaparte. Whenever a field battle was won (or lost), the soldiers and officers would open it up and each get a nip .It is the last remaining bottle in the world.

View the gallery here. “Make no mistakes folks, vintage liquors aren’t the ‘ordinary’ drinks that you use to spice up your eggnog,” says Bart Laming, head of Old Liquors, located in Breda, The Netherlands. “Only the most fortunate will have the chance to let their taste buds be tickled by these aged and delicately blended and precious elixirs,” adds Bay van der Bunt, owner and lifelong collector.

Editorial conversion from Euros to U.S. dollars performed and rounded up from two decimals points based on exchange rate 12/14/12.