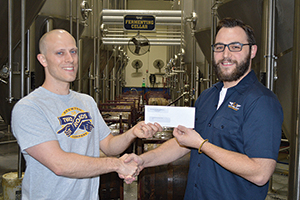 Two Roads Brewing Co. has donated $1,500 to the Connecticut Air and Space Center in Stratford. During their annual bottle release of Igor’s Dream, a Russian Imperial Stout, the brewery hosts a day of activities celebrating Connecticut’s aviation history and the achievements of Igor Sikorsky.

“Two Roads is all about honoring the magnificent manufacturing history of our area, and aviation has been an obvious cornerstone of that history with the invention of the helicopter and the production of aircraft and engines over the years at the site of today’s Army Engine Plant,” said Two Roads Tasting Room Manager, Ted Pert.

Christopher Soltis, Curator for the Connecticut Air and Space Center said, “The Connecticut Air and Space Center is thankful to the Two Roads Brewing Company for their continued assistance in helping establish the museum as a significant educational and cultural aviation attraction. We also foresee a strong and long lasting collaboration with our friends at Two Roads.”