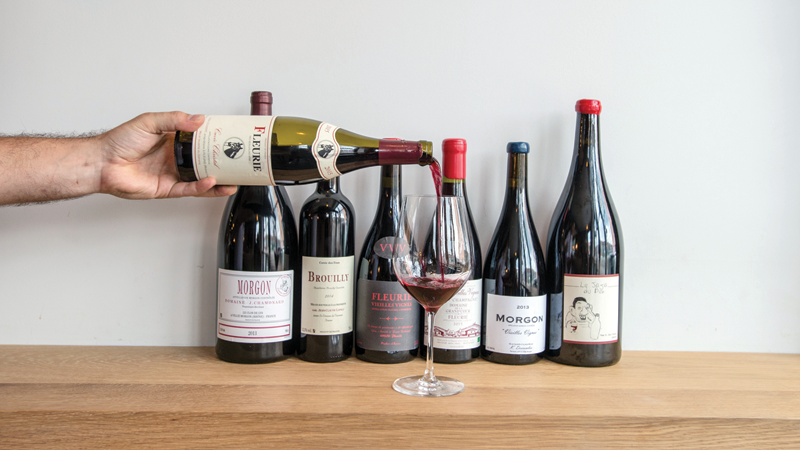 To stand out from the pack, restaurants are shaping their wine lists in provocative ways 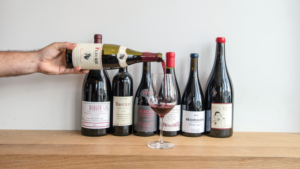 Why does creativity end with choosing the wine itself? Other things in the wine world have changed, but presentation of the wine in the form of a list hasn’t changed at all,” asks Paul Grieco, proprietor of Terroir Wine Bar in Manhattan. Grieco’s list, which includes full-page paeans to producers like Chateau Musar; a birthday nod to Chianti, and passionate, sometimes off-color asides to wines he feels strongly about, takes a stand against the status quo.

Chef Chris Shepherd’s list at Underbelly in Houston is similarly irreverent, with cartoons and a shout-out from Beastie Boy Mike-D. In Scottsdale, Arizona, Cowboy Ciao’s list gets meta and a bit questionable, featuring “actual guest quotes.”

Gimmicky? “A lot of people are interacting with the list when you present it,” says Grieco. “Why miss an opportunity to engage in a new and different way? Why not make a great first impression?”

While Grieco concedes that some guests, typically older ones, have been taken aback, the usual reaction is positive. He draws the line at lists that aren’t hospitable and fail to provide baseline details about the wines, citing the example of Hatchet Hall in Los Angeles. For a time they organized their list according to the sales rep who supplied the wine; individual wines were listed with little or no information whatsoever, not even a producer or grape in many cases: “ham wine,” “oyster wine,” or “Vielles (sic) Vignes’13,” or “#kistler’15,” the last being not the Sonoma Chardonnay but a white wine in a glass that was first rinsed with Bourbon (the list is more conventionally organized these days).

What’s The Story?
Opacity is no virtue, and a list doesn’t have to be baroque or large to have an engaging personality. The wine list at Husk in Charleston and Nashville creates a conversation by matching the food with the restaurant’s farm-to-table concept: wines are listed by the soil type they’re grown in (limestone, alluvial, volcanic) followed by the place of origin, and only then backing into the more usual data: grape variety, vintage, and producer. 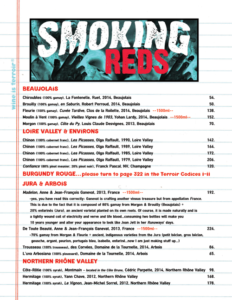 “When you enter there’s a huge board with all our purveyors and where the food came from,” says Nicolette Anclit, Sommelier at the Nashville location. “The list has the same idea.” Guests don’t always clue in immediately, but Anclit and her staff know when to step in. “That’s my job as sommelier on the floor. You’re creating a story; that’s why people come to the restaurant. I can talk about how the limestone wines have a lot of chalk and minerality and equate that with the oyster dish.”

It’s not just layout, of course; the wines you choose can start the conversation, too, especially when a list takes a strong, unexpected stand on a region or grape. At Freeks Mill in Brooklyn, the relationship between the locally sourced menu and the wine list’s emphases—Loire Valley Chenin and Beaujolais—isn’t immediately clear, though Alex Alan, Beverage Director and Partner, says that they suit the cuisine well. He was personally attracted to Chenin’s range of expression—“it does everything: sparkling, dry, sweet, semi-sweet”—and enjoys showing diners that Beaujolais doesn’t just mean “a juicy red you drink in mid-November.”

Going Coastal
Opened last October in Watertown, MA, by Garrett Harker and Andrew Holden—owner and GM of Boston hotspot Eastern Standard, respectively—Branch Line is a neighborhood rotisserie with a very focused but flexible list. Holden wanted the list to be a cohesive collection of wines produced in coastal regions—particularly around the Mediterranean, which pair well with the restaurant’s fare. It’s one thing to have a thematic goal in mind; it’s another to translate the theme in a format that does not require heavy lifting (or reading, as it were). Tasked with this challenge, the team at Branch Line, which included GM Deena Marlette and Wine Director Charlie Gaeta, came up with a list comprising a number of low-visibility, high-quality wines from offbeat locales such as Corsica, Crete, Sardinia, Sicily and Tenerife—organized into succinct sections.

A 12-wine Corsica section starts the list off with an unexpected bang; other headers include “Rotisserie Whites & Reds,” “Portofino to Provence” and “Pres de la Mer,” among others. Within each section, typography is used to make both regions of origin and grapes clear. 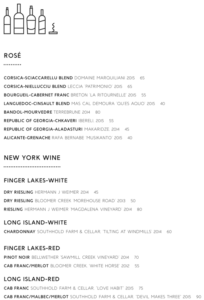 The list was well-received from the start. “Early on I noticed that people who were flipping back and forth between pages out of curiosity, not confusion,” Gaeta says. “They recognize a real point of view on the list, and they know we are ready to offer more details on any of the wines.” Staff training touches on wine daily, he adds, and a full hour each week is devoted exclusively to wine. He credits personalized ongoing training with Branch Line’s ability to move cases of wines like Caravaglio 2015 “Salina” Malvasia from Sicily.

Middle Tier Role
Not to be left out of the discussion are distributors, whose role in wine list creation is completely different than it was a few decades ago, notes Eric Hemer, who is a Master Sommelier and Master of Wine as well as SVP and Corporate Director of Wine Education for Southern Glazer’s. It was once common for a salesperson to literally create a wine list—not only selecting the wines but also printing and maintaining the physical list.

“Only the very top restaurants had a knowledgeable person in charge of the wine program, so it was a relief for most restaurant managers to have this service provided for them,” Hemer recalls. “There was a lot of competition between distributors to be the one to provide this service as it allowed you to control the wine program.”

Today is a whole new ballgame. Not only do more restaurants at all levels have someone in-house running the wine program, the lists are far more sophisticated and quickly modified in house via laser printer. “Today’s wine distributor personnel need to know so much more than their past counterparts,” notes Hemer. “Not all that long ago, few had even heard of wines such as Prosecco, Brunello di Montalcino, or Greco di Tufo. Now they are common. Not to mention the passion for off-the-beaten path regions and varieties that many new sommeliers seem to adore. The more obscure, the better.”

The latest trends are not a problem, however, he adds, as they can be capably tracked with timely training. “This is why wine education has become so important,” says Hemer, “not only for the distributor sales personnel but also in their ability to impart that knowledge to their customers. Requests for staff training are a far bigger part of the daily distributor routine today than in the past.”